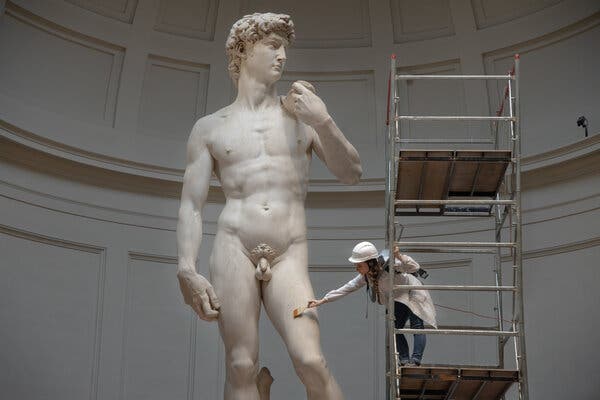 Eleonora Pucci at work in the Galleria dell’Accademia in Florence, Italy.Credit…Chiara Negrello for The New York Times

It is one perk of being the in-house restorer of the Galleria dell’Accademia in Florence, Italy, where Eleonora Pucci’s task is to regularly dust Michelangelo’s David, which she described recently as exhilarating, if somewhat nerve-racking. As reported by The New York Times.

“To be able to contribute, even in a small way, to the conservation of David’s beauty” makes hers “the best job in the world,” Ms. Pucci said. “Is there anything greater than passing on beauty?”

It was last Monday, the one day the Galleria is closed to the public, and the clanging of metal echoed throughout the museum as a specialized team built a scaffold tower in the airy rotunda that housed the David. Over the course of the morning, the tower would be gingerly repositioned so that Ms. Pucci could reach the 17-foot-high statue from all sides.

Ms. Pucci nimbly scampered up until she was eye to giant eye with the statue that Michelangelo carved from a single block of marble from 1501 to 1504, the first nude colossal statue made since antiquity. The David has called the Galleria home since 1873.

The job begins with a photographic close-up to better track any wear and tear on the statue and to verify how much dust and debris (of microscopic dimension) has settled on it since the last time it was cleaned.

That can change depending on the season, the number of visitors and the kind of clothes they may be wearing. Microscopic fibers can get caught in tiny spider webs among the sculpted locks of the David’s hair. “It’s pretty normal,” Ms. Pucci said matter-of-factly — and all the more reason to ensure that works are constantly monitored.

Then the dusting begins.

As Ms. Pucci says “The statue is not going to dust itself.”