During this weekend’s broadcast of “The McLaughlin Group,” host John McLaughlin asked his panel about what would happen to Occupy Wall Street as its novelty wears off and the weather gets colder. MSNBC commentator Pat Buchanan’s response was:

“It’s going to end very, very badly with these folks in the winter,” Buchanan said, “and they’re not going to be getting publicity and they’re going to be acting up and acting badly like the worst of the demonstrators in the ’60s … not just overnight camping: They’re going to start fighting with the cops.”

“There was [already] one fight with the cops in Oakland: An Iraq war veteran was hit with a projectile in the head and is in critical condition,” Clift said.

“I don’t know who you blame for that, but I know how I view it. I think they have staying power … and secondly the suffragists who stood in front of the White House — they thought they would go home when it got cold. They heated bricks for them to stand on. I think these people have some staying power.” 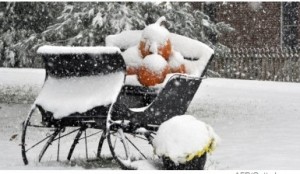 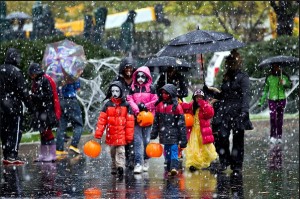 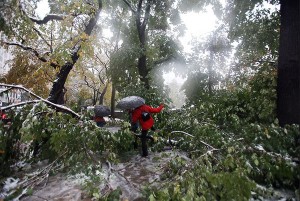 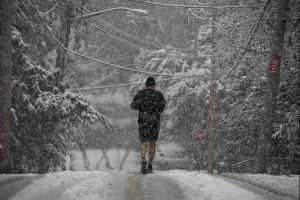 This video was passed onto me by my colleague, Ofelia Garcia.  It was taken at a meeting of the Panel for Education Policy (or PEP).  The PEP replaced the Board of Education when Mayor Bloomberg took control of the schools in 2002.  It is intended to be a democratic forum where people voice concerns, prior to the panel’s vote on educational policy.

At this meeting the PEP was convening on October 25, 2011, to discuss new standards being implemented in the schools.

Two hundred parents, teachers staff and students were in attendance. 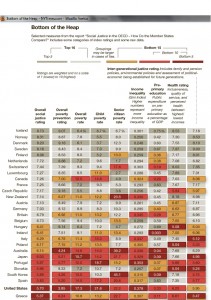 In a report released on Thursday by the Bertelsmann Stiftung Foundation of Germany entitled “Social Justice in the OECD — How Do the Member States Compare?” the United States ranked 27th out of 31 countries on the overall social justice metric.  The OECD (Organization of Economic Cooperation and Development) evolved from the Marshall Plan and is made up of 34 (mostly European) countries.  The ranking is based on a number of indicators related to poverty, health care and education.

“We sold ourselves a pipe dream that everyone could get rich and no one would get hurt — a pipe dream that exploded like a pipe bomb when the already-rich grabbed for all the gold; when they used their fortunes to influence government and gain favors and protection; when everyone else was left to scrounge around their ankles in hopes that a few coins would fall.

We have not taken care of the least among us. We have allowed a revolting level of income inequality to develop. We have watched as millions of our fellow countrymen have fallen into poverty. And we have done a poor job of educating our children and now threaten to leave them a country that is a shell of its former self. We should be ashamed.”

Nicholas Kristof’s column in yesterday’s NY Times dealt with the topic of “crony” capitalism.  After declaring that “I’m as passionate a believer in capitalism as anyone”, he describes crony capitalism as:

“[when] some financiers have chosen to live in a government-backed featherbed. Their platform seems to be socialism for tycoons and capitalism for the rest of us. They’re not evil at all. But when the system allows you more than your fair share, it’s human to grab. That’s what explains featherbedding by both unions and tycoons, and both are impediments to a well-functioning market economy.”

He also quotes, Lawrence Katz, a Harvard economist, who “adds that some inequality is necessary to create incentives in a capitalist economy but that “too much inequality can harm the efficient operation of the economy.” In particular, he says, excessive inequality can have two perverse consequences:  first, the very wealthy lobby for favors, contracts and bailouts that distort markets; and, second, growing inequality undermines the ability of the poorest to invest in their own education.”

“So, yes, we face a threat to our capitalist system. But it’s not coming from half-naked anarchists manning the barricades at Occupy Wall Street protests. Rather, it comes from pinstriped apologists for a financial system that glides along without enough of the discipline of failure and that produces soaring inequality, socialist bank bailouts and unaccountable executives.”

It’s time to take the crony out of capitalism.

There is much going on with the Occupy Wall Street movement.  Hundreds of people in New York City marched last night to show support and solidarity with protesters in Oakland, Calif., where the police used tear gas to disperse crowds on Tuesday.  The NY Times reported that

“In Oakland on Tuesday, about 100 people were arrested when the police tried to clear protesters from a plaza across from City Hall. One protester there, an Iraq war veteran named Scott Olsen, was struck in the head by a projectile. He was listed in critical condition on Wednesday.”

The 99% Occupy Wall Street protesters also are not just imagining the disparity in income among the American population.  The gap between the incomes of the rich and poor is broad and deep, according to a new report from the Congressional Budget Office

The study by the Congressional Budget Office, released this week, found that income has become dramatically concentrated, shifting heavily toward the top earners between 1979 and 2007.

And although incomes at all levels have risen some, they’ve skyrocketed for the very wealthiest of earners.

At the other end of the scale, Americans in the bottom fifth of earners saw their incomes increase by less than 20 percent across the nearly three decades. Incomes for those in the middle 60 percent climbed by less than 40 percent over the same span.

Things start to look especially good for the top fifth of earners, who saw their cash flow jump by 65 percent.

But it’s among the top 1 percent where the growth was breathtaking. That contingent saw their incomes spike by 275 percent.

Maureen Dowd in her NY Times column today, looks at the personality of Steve Jobs.  Using Walter Isaacson’s recently released biography, in typical Dowd long-fingernail-fashion, she paints a not-so-complimentary picture of the Apple icon.  She titles her column, The Limits of Magical Thinking, and while acknowledging his genius, she dwells on his flaws.  “Certainly, Jobs created what Shakespeare called “the brightest heaven of invention.” But his life sounded like the darkest hell of volatility.”

Dowd draws on sad examples of how he treated his employees, children, wives, and associates.   For instance:

“Andy Hertzfeld, a friend and former Apple engineer, lent [Jobs’ daughter] Lisa $20,000 when she thought her father was not going to pay her Harvard tuition. Jobs paid it back to his friend, but Lisa did not invite him to her Harvard graduation.”

I think Isaacson will soon be on the Times best-seller list again.

Here are a few excerpts from his review:

“Rice is no better than Cheney trying to sell not just her book but this idea that somehow the decision to start a war and take out a regional thug who had absolutely nothing to do with 9/11 has somehow been vindicated.”

“… after moving on a country that had no weapons of mass destruction, that was never going to pose a threat to this country,   Rice not only wants to validate Bush’s “Freedom Agenda” in Iraq, she wants to give Bush and Cheney and Rumsfeld – and herself, of course – credit for the uprisings of Tunisia, Egypt, and :Libya in this year’s Arab Spring.”

And asked about the cost of the war Rice says:

“I don’t think you put a price on a Middle East that will look very different without Saddam Hussein and with movement toward freedom..    She knows better, knows the price was nearly 4,500 dead American soldiers. The price was more than 30,000 American wounded and 100,000 dead Iraqis.

We grieve for our war dead and wounded.  And of the dead Iraqis, their children and grandchildren will minimally distrust if not hate America for decades to come.

The  NY Times editorial today provides the rationale for why we need an Occupy Wall Street movement in this country.    The first three sentences say  it all:

“Big business has clearly decided that the economic crisis is too important to waste. While Washington debates how to create jobs and cut the budget deficit, major corporations — read major campaign contributors — are pushing Congress for an enormous tax cut on corporate profits. Lawmakers seem all too eager to grant their wish.”

While sitting on over $2 trillion of cash, corporate America might find the will to create more jobs if they are given  “a temporary tax holiday that would allow them to bring foreign-held earnings back to the United States at a vastly reduced tax rate. A bill in the House would tax repatriated earnings at 5.25 percent, a fraction of the usual rate of 35 percent; a bill in the Senate would cut the rate to 8.75 percent.”

The editorial points out that the last tax holiday given  in 2004, “largely failed to spur investment or job growth. Companies spent most of the repatriated $300 billion on dividends and stock buybacks, enriching executives and shareholders.”

Is there no shame in how corporate America  and its Washington cronies operate.

On a subject that has received attention on this blog, Professor Gregory Johnson passed along this story that appeared in the New York Post yesterday.  Entitled Remedial class’ nightmare at CUNY, it states that in Fall 2010 nearly 80 percent of the students entering the City University of New York’s community colleges failed at least one basic skills examination in either reading, writing or mathematics.  Furthermore, the situation is getting worse with more NYC public school graduates (22.6%) needing to take remedial coursework in all three basic skill areas.   One observer blamed lax standards, dumbing down of New York State Regents Examinations needed to graduate and an expansion of credit-recovery programs.  David Bloomfield, a colleague and professor at Brooklyn College, likened credit recovery to “giving out credits like candy…The graduation rate has increased, but without the subject mastery…It amounts to social promotion.”  In sum, NYC public high schools are graduating more students but fewer of them are able to do college level-work.  We are doing them and their parents an injustice.