It appears that in the past year we have had one bit of bad news after the other regarding the New York City’s public schools.  First, there was the NYS  Education Department as well as the NYC Department of Education admission in October 2010 that the standardized tests used to evaluate competencies and achievement were “dumbed down” for many years (see my blog posting The Dishonesty of Standardized Testing in New York City Redux!).

Second,  New York State education officials released a new set of graduation statistics in February 2011 that show less than half of students in the state are leaving high school prepared for college and well-paying careers (see my blog post of February 8, 2011).    In New York City, the results show that only 23 percent of students in New York City graduated ready for college or careers in 2009, not counting special-education students. That is well under half the current graduation rate of 64 percent, a number often promoted by Mayor Michael Bloomberg as evidence that his education policies are working.

Now according to an article in the NY Times yesterday, it appears that NYC students are not able to do science.  Only 18 percent of the city’s public school fourth graders and 13 percent of its eighth graders demonstrated proficiency on the most recent national science exams, far below state and national levels, according to results released Thursday.  Shael Polakow-Suransky, the City Education Department’s chief academic officer, and Alan J. Friedman, a member of the National Assessment Governing Board, which oversees the tests, called the city’s results “a big disappointment”.  Mr. Friedman is quoted as saying that the the city’s poor performance in science suggested that the emphasis on math and English, which have been the main measures of school progress under the federal No Child Left Behind law, had come at the expense of other subjects. “It does play a big role,” he said, “and that’s one of the major problems we have.”

It is refreshing to see the honesty of Mr. Polakow-Suransky and Mr. Friedman in their assessment of this situation.  For nine years, we had only good news and media hype from Mayor Michael Bloomberg and former School’s Chancellor Joel Klein about the progress that had been made under mayoral control in the New York City public schools.   By the way, where is Chancellor Black on any of this.

The quote of the century at least until now goes to Defense Secretary Robert Gates.   Yesterday he  bluntly told an audience of West Point cadets  that it would be unwise for the United States to ever fight another war like Iraq or Afghanistan, and that the chances of carrying out a change of government in that fashion again were slim.

“In my opinion, any future defense secretary who advises the president to again send a big American land army into Asia or into the Middle East or Africa should ‘have his head examined’.

In an earlier post about the protests in the Middle East, a colleague at the Graduate Center mentioned to me that I should have included Wisconsin on my map.  Well here you go.  Sorry if the superimposition is a bit clunky. 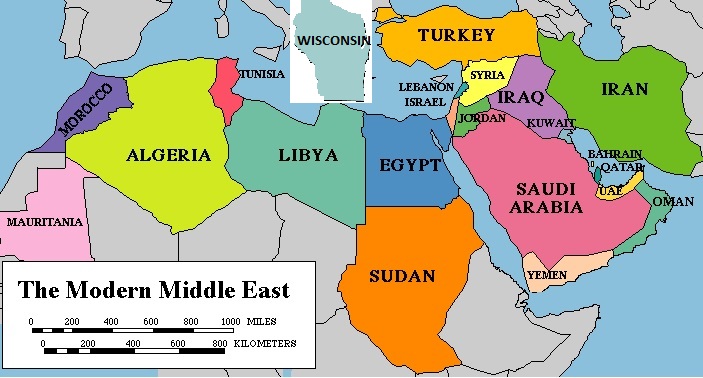 With the exception of one post a couple of weeks ago on Egypt, I have not commented on the Middle East protests and freedom movements.  It is not because I am  not interested, it is just that there is so much going on, it is difficult to keep track

The New York Times must have been reading my mind because today it provided a website that reviews the movements in the Middle East on a country by country basis with access to a number of its articles that covered  the various stories.  If you are like me and need a review, you might find this compilation helpful.

As I concluded in my Egypt post, let’s hope for  peaceful and democratic resolutions. 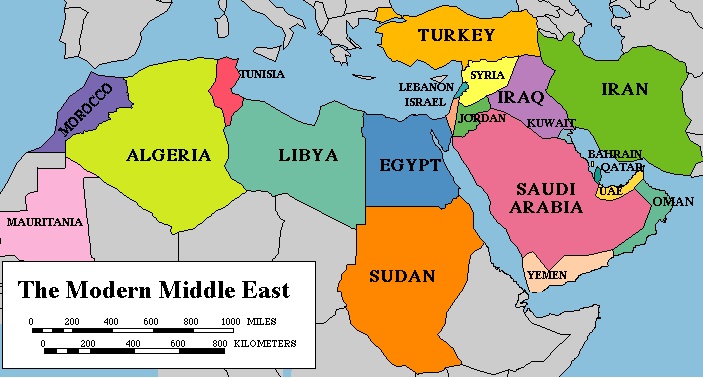 Since Monday I have been traveling/visiting at the University of Illinois – Springfield.    Putting aside the time I spent in airports,  the trip was enjoyable.  On Monday, my connecting flight to Chicago which eventually would have gotten me to Springfield at 1:30 in the afternoon was canceled and I had to rebook a flight via St Louis instead.  I did not get to Springfield until 2:00am on Tuesday morning.  I was in Springfield at the invitation of colleagues Ray Schroeder and Karen Swan.  It was a good couple of days discussing with administrators, faculty, students and public school teachers, issues related to  online and blended learning.   Springfield has developed a number of excellent online programs and is enrolling students from throughout the U.S.A. and beyond.  Their story is remarkable given that a relatively small college (about 5,000 students) in a period of ten years was able to mount a major initiative to become a nationally recognized, high-quality online learning provider.

Nobel Laureate and  columnist, Paul Krugman, has a fine piece in today’s NY Times on “the power play” going on in Wisconsin between the governor and the public unions.     His basic premise is that the situation  is not about the state’s fiscal issues but a power play on the part of the Republican governor to reduce significantly and permanently  the power of the Democratic-leaning unions.  Krugman goes on to equate Governor Scott Walker as a representative of the political oligarchy that has come to dominate American politics while portraying  unionism as one of the balances that common people have to balance the oligarchy.  The best comments in the column are:

“So it’s not about the budget; it’s about the power. In principle, every American citizen has an equal say in our political process. In practice, of course, some of us are more equal than others. Billionaires can field armies of lobbyists; they can finance think tanks that put the desired spin on policy issues; they can funnel cash to politicians with sympathetic views (as the Koch brothers did in the case of Mr. Walker). On paper, we’re a one-person-one-vote nation; in reality, we’re more than a bit of an oligarchy, in which a handful of wealthy people dominate. “

Krugman has it right!

Politics Daily reports that former President Bill Clinton honored the Little Rock  Nine yesterday at a ceremony opening a new permanent exhibit in his presidential library featuring the Congressional Gold Medal they were awarded.  For those  who are too young to  remember this event, it was September 1957 when Governor  Orval Faubus issued an order ordering the Arkansas National Guard to prevent nine black students from attending  the racially segregated Little Rock Central High School.  In response, President Dwight D. Eisenhower ordered the U.S. Army’s 101st Airborne to federalize the Arkansas National Guard and to escort these nine students to school which they did amid angry mobs for the entire school year.  Without any doubt, it was one of most important events of the entire Civil Rights Movement in this country.

Thank you President Clinton for remembering these nine brave individuals. 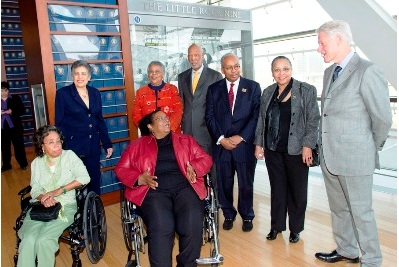 We have commented  on this blog on the shortcomings of the testing program administered by the NYC Department of Education.   Some of the practices perpetrated by the NYC DOE as well as the previous administration of the New York State Department of Education  have been nothing short of travesties for the children and the parents of our fair city.  Today, the NY Times reported that the NYC DOE will implement new auditing procedures designed to reduce the amount of cheating, fudging and otherwise adjusting test scores and graduation rates designed to make the public schools look “good”.  Test scoring is surely a problem in the individual schools.  The morass of definitions and procedures related to high school graduation rates, dropouts, transfers, credit recovery programs, etc.  is as much a problem at the NYC DOE central administration as it is in the schools themselves.

During the past couple of days, there has been so much to blog about that I am not sure where to begin.

First, there was the Jeopardy duel with IBM’s new Watson computer.  If you did not follow this, Watson crushed two all-time Jeopardy champions in a three-day trivia contest.  However, in an Op-Ed piece to the NY Daily News yesterday, Ken Jennings one of the human contestants who lost to Watson, seemed to suggest that Watson had an unfair advantage due to the signaling button mechanism.

Second, for classical music lovers, a new opera, Anna Nicole, yes that Anna Nicole, opened at Covent Garden in London last night.  The revue by Anthony Tommasini of the NY Times describes it as:

“An opera about Anna Nicole Smith–the American sex symbol, Playboy Playmate, hapless model, laughable actress and fortune-hunting wife of a billionaire 62 years her senior? …had its premiere here at the Royal Opera on Thursday night before a sold-out house with standees everywhere. And it proved a weirdly inspired work, an engrossing, outrageous, entertaining and, ultimately, deeply moving new opera. This was an improbable triumph for Covent Garden.”  Well, Well, Cheerio!

Third, and on a more serious note, a developing story that has been under the news radar has been the ongoing student demonstrations at the University of Puerto Rico for the past year or so.  The NY Times had an article covering this story indicating that these protests turned violent when police were called in to quell the demonstrations.

Lastly, Mayor Bloomberg unveiled his “Good News” budget yesterday indicating that because of careful planning, a surge in business tax revenue and a record-breaking tourist season, New York City was going to be in fairly good fiscal shape for the coming year.  However:    “his fiscal plan would still eliminate more than 6,000 teaching positions… 100 centers for elderly people … 20 fire companies would close, and 17,000 slots for child care would vanish. One of the mayor’s signature efforts to combat homelessness, a rental-subsidy program that provides an incentive for the homeless to find a job, would be eliminated.”      DUH!!!!

The U.S. Department of Education is sponsoring a Labor Management Collaboration conference based on the question: “How can we transform the relationship between labor and management into a strong partnership for improving student learning?”   For two days (February 15-16), school board presidents, superintendents, and union officials from 150 school districts  are meeting in Denver to discuss this question.   This is surely a step in the right direction.  The NY Times is covering this conference and reports that the relationship between  NYC’s school chancellor, Cathleen Black and UFT president, Michael Mulgrew, is such that Mr. Mulgrew decided not to come to the conference.   I am not sure who is at fault here but NYC children and their parents deserve better.