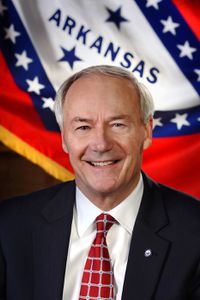 Republican Governor Asa Hutchinson said Donald Trump’s meeting with a white nationalist last week was not “accidental” and that “it shouldn’t happen.”

Trump, who this month announced he was running for president in the 2024 election, hosted a dinner with white supremacist Nick Fuentes and rapper Ye, formerly known as Kanye West, at his Mar-a-Lago resort last Tuesday night.

Several political leaders have criticized Trump’s dinner with Fuentes, a leader in the far-right movement, and Ye, who has come under fire for antisemitic comments, including David Friedman, Trump’s former ambassador to Israel, and former GOP New Jersey Gov. Chris Christie.

Hutchinson added that “it’s not a good idea for a leader that’s setting an example for the country or the party to meet with an avowed racist or antisemite.”

“It’s very troubling and it shouldn’t happen,” Hutchinson said. “We need to avoid those kinds of empowering the extremes. When you meet with people you empower, and that’s what you have to avoid. You want to diminish their strength, not empower them. Stay away from them.”

Hutchinson has been the subject of speculation as a possible 2024 presidential contender. The Arkansas governor will give remarks this week at the Ronald Reagan Presidential Library in Simi Valley, California.

In a preview of his remarks, Hutchinson said that Republican candidates who disavowed the elections went on to lose their races in the midterm elections. He said he would emphasize that Republicans should “not denigrate our political systems” or “undermine confidence in America.”

When asked about potential 2024 candidates, such as himself or former Vice President Mike Pence, who are positioning themselves as potential alternatives to Trump, Hutchinson said: “It should be in our voice of reality that this is exactly where we are as a party and where we need to go to reach out to those independents and expand the base of the party and move beyond the Trump era.”

The Republican Party needs more leaders like Hutchinson to speak out against Trump and how he represents the GOP.