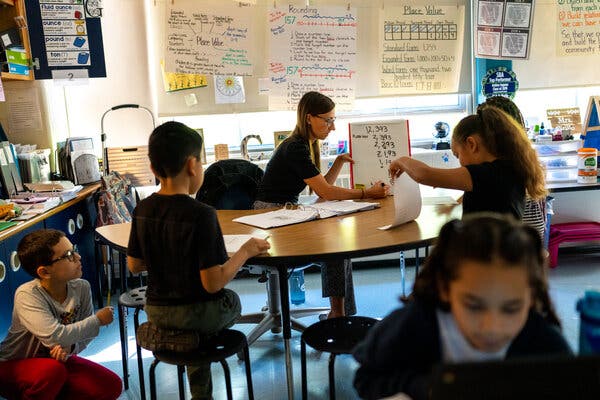 Nationally, test scores have fallen in math even more than in reading. At Benjamin Franklin Elementary, children have defied the trend. Credit…Christopher Capozziello for The New York Times

Mathematics has been the hardest hit subject in terms of student outcomes since the COVID Pandemic started in 2020. Benjamin Franklin Elementary in Meriden, Connecticut has implemented a new teaching strategy that allows teachers to spend more time on the subject.  It appear to be paying off.  Here is an excerpt from a New York Times article describing its  approach.

“It’s just after lunchtime, and Dori Montano’s fifth-grade math class is running on a firm schedule.

In one corner of the classroom, Ms. Montano huddles with a small group of students, working through a lesson about place value: Is 23.4 or 2.34 the bigger number? Nearby, other students collaborate to solve a “math mystery.” All the while, Ms. Montano watches the time.

This is what pandemic recovery looks like at Benjamin Franklin Elementary in Meriden, Conn., where students are showing promising progress in math, a subject that was hit hard during the shift to remote learning, even more so than reading.

The school’s math progress may not look like much: a small improvement amounting to a single decimal point increase from spring 2019 to the spring of this year, according to state test results.

But by pandemic standards, it was something of a minor miracle, holding steady when test scores nationally have fallen, particularly among low-income, Black and Hispanic students, the children that Franklin serves. About three in four students at the school qualify for free or reduced lunch, and a majority are Hispanic, Black or multiracial.

The groundwork was laid before the pandemic, when Franklin overhauled how math was taught.

It added as much as 30 minutes of math instruction a day. Students in second grade and above now have more than an hour, and fourth and fifth graders have a full 90 minutes, longer than is typical for many schools. Students no longer have lessons dominated by a teacher writing problems on a white board in front of the class. Instead, they spend more time wrestling with problems in small groups. And, for the first time, children who are behind receive math tutoring during the school day.

Any one of the changes may seem small. But pulling them off required an almost herculean effort and cultural shifts at every level. District officials needed to shake up teaching methods and the school day to maximize instruction time; principals needed to enforce the changes and teachers had to accept having less autonomy.

“In the old way, it was, Open your textbook and sit there and be bored,” said Dan Crispino, the director of school leadership who oversaw changes at Franklin and other elementary schools in Meriden, a former manufacturing town with about 8,500 students in its public schools.

By his own admission, the changes did not always make Mr. Crispino popular.

“They had a wanted sign — dead or alive — for me all over the district,” he joked, though a certain truth remained. After all, he was telling teachers how to do their jobs, sometimes down to the minute.

The results are still early, but Franklin offers a glimpse of just how much it may take to help students catch up amid the pandemic — and how far there is to go.

When federal officials release national test results for fourth and eighth graders on Oct. 24, educators expect to see stark declines from 2019. Even before Covid, American students trailed global competitors in math, and too many children performed below grade level, with alarming gaps in outcomes that often left low-income students and students of color behind.

Today, at Franklin, about 45 percent of students are proficient in math, in line with state averages. Yet an hour south in New Canaan, a wealthier, whiter district with a median household income of about $190,000, elementary students have almost double the math proficiency rate, at about 85 percent. Like other states, Connecticut has significant disparities in school funding that mean Meriden’s spending per student is among the lowest in the state.

“The bottom line is that school districts across the country have their work cut out for them,” said Daniel A. Domenech, executive director of the School Superintendents Association. “We have such a significant achievement gap in performance in this country between the haves and the have-nots, and that gap was made even greater by the pandemic.”

Mr. Crispino, a former principal, was hired to oversee all elementary schools after helping turn around one district school that had been at risk of being taken over by the state because of poor performance. The school was eventually awarded a prestigious national award, and Mr. Crispino was asked to take the lessons learned districtwide.

Then the pandemic struck.

Meriden reopened faster than many places, by fall 2020, a decision that surely helped buffer against more serious academic losses. Still, many families opted to stay home, including at Franklin, where some students remained remote for many months.

To make up for lost learning, schools across the country have sought to add instruction, though often outside the school day, during afternoon tutoring or summer school. Such programs can be helpful but depend on student attendance.

Meriden continued to bet on the school day itself.

District officials had repurposed a half-hour meant for extra help on various subjects — either from teachers or through work sheets — and put that time into math.

Up and down the hallways at Franklin, math is now taught the same way: a short lesson, followed by group work. For 15 or 20 minutes, the teacher meets with some students, while others work in their own groups. Students who need extra help go with tutors, some of whom were paid for with federal pandemic relief funds.”