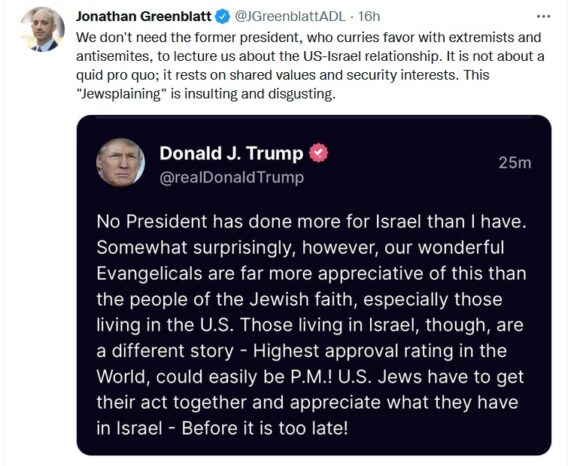 Jonathan A. Greenblatt, the CEO of the ADL responds to Trump

Former President Donald Trump criticized the U.S. Jewish community yesterday for, as he put it, being insufficiently supportive of Israel.

“U.S. Jews have to get their act together and appreciate what they have in Israel — before it is too late!” Trump declared on his social media website, Truth Social. As reported by Yahoo News and other media.

Trump touted his support for Israel in office while saying American Jews don’t fully appreciate his accomplishments for the country. “No President has done more for Israel than I have,” he asserted. “Somewhat surprisingly, however, our wonderful Evangelicals are far more appreciative of this than the people of the Jewish faith, especially those living in the U.S.”

Antisemites have argued for centuries that Jews can have “dual loyalty” with their religious faith; in the modern era, that pillar of antisemitism has shifted to claiming that Jews have an allegiance to Israel.

It’s a canard that Trump has previously promoted.

In 2019, then-President Trump drew widespread criticism when he said American Jews who support Democrats were showing “great disloyalty” to Israel. “If you want to vote Democrat, you are being very disloyal to Jewish people and very disloyal to Israel,” he also said at the White House.

“It’s unclear who @POTUS is claiming Jews would be ‘disloyal’ to,” Jonathan Greenblatt, the chief executive of the Anti-Defamation League, said on Twitter at the time, “but charges of disloyalty have long been used to attack Jews.” He added: “It’s long overdue to stop using Jews as a political football.”

Jonathan A. Greenblatt, the CEO of the ADL (Anti-Defamation League) and its National Director, responded to Trump on Twitter (see above).