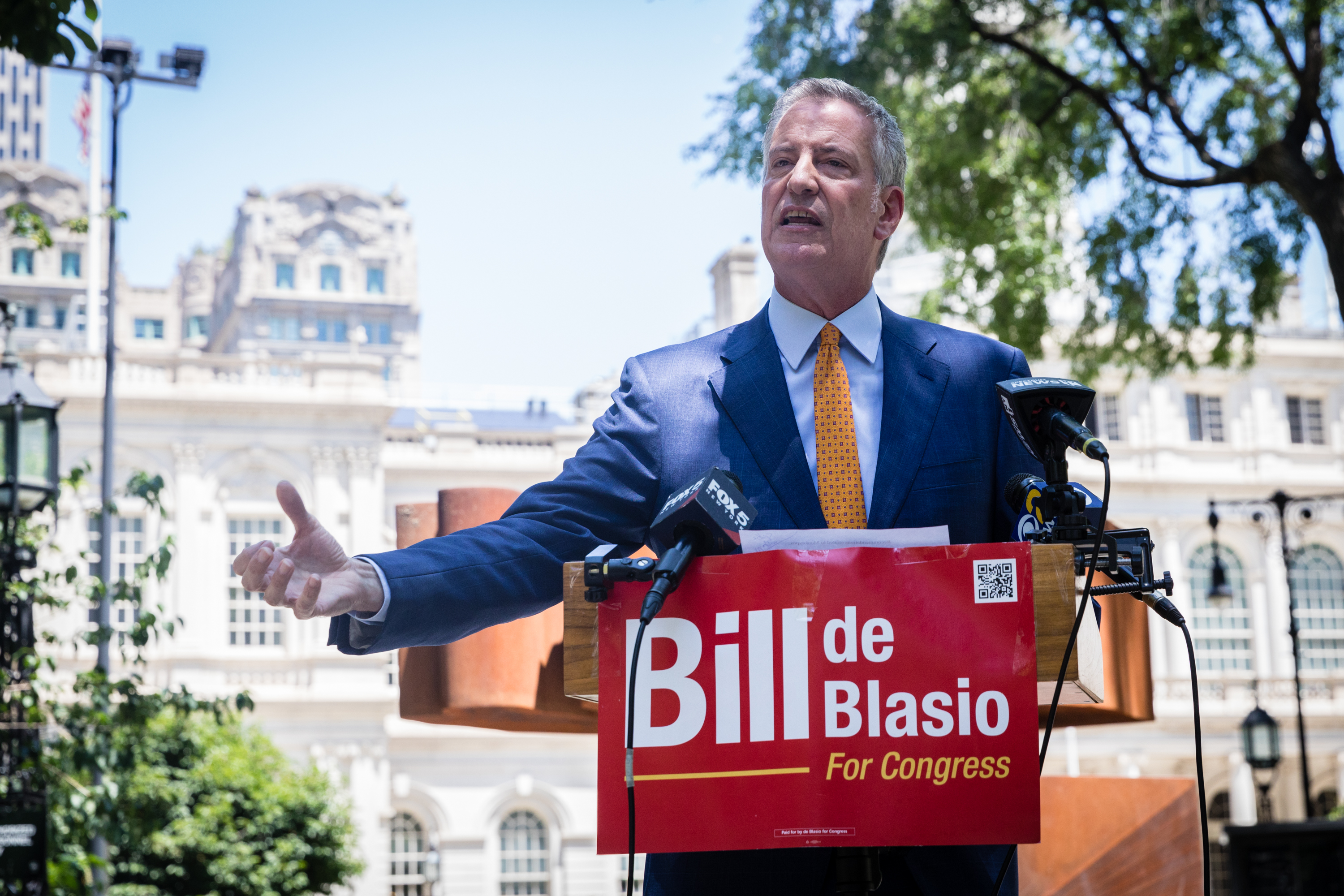 Bill de Blasio, the former mayor of New York City, ended his campaign for Congress on Tuesday, saying that voters were clearly “looking for another option” and that his time in electoral politics was over.

Mr. de Blasio had jumped into the race for the open, safely Democratic seat in late May, hoping to revive his career after eight years as mayor and several months in the political wilderness. There was no better path, he reasoned, than the newly drawn House seat, which covers parts of Lower Manhattan and the section of brownstone Brooklyn that constitutes his political home.

But as he crisscrossed the district — touting his universal prekindergarten program and sometimes campaigning in gym shorts — Mr. de Blasio struggled to overcome low approval numbers from his days as mayor. Polls, including one commissioned by his campaign, showed him performing poorly in a crowded field of a dozen other Democrats, and he watched as one-time allies and donors gave their support to younger rivals.

In an unusually candid video posted to his Twitter account Tuesday afternoon announcing his decision, Mr. de Blasio, 61, grappled openly with his unpopularity and unspecified “mistakes.”

“I’ve listened really carefully to people,” he said. “And it’s clear to me when it comes to this congressional district, people are looking for another option, and I respect that.”

As reported by The New York Times:

Mr. de Blasio, who ran a disastrous campaign for president in 2020 and waffled over whether to run for governor this year, said that he would take time to recalibrate his approach after the reception he got on the campaign trail — but added, with an air of finality, that it was “time for me to leave electoral politics.”

He joins an unbroken line of New York City mayors, stretching back to the 19th century, who have struggled to win higher or even a parallel office after their time in City Hall.

“I’m also recognizing I made mistakes,” Mr. de Blasio said. “I want to do better in the future. I want to learn from those mistakes. It’s been a humbling experience sometimes, but it’s been a healthy experience.”

Neal Kwatra, a strategist for Mr. de Blasio, said that the former mayor reached the decision to quit late Monday after private polling commissioned by the campaign showed an exceedingly rocky path ahead. Because the new district was only made final by state courts in May, candidates in the race, including Mr. de Blasio, had a very short runway to introduce or reintroduce themselves to voters.

“It was clear we were dealing with something much bigger than any one issue or dynamic,” Mr. Kwatra said.

Mr. de Blasio did not immediately endorse another candidate in the closely watched race. Given his unpopularity, though, there was little to indicate his former rivals wanted his public backing ahead of the Aug. 23 Democratic primary.

For instance, Alyssa Cass, a spokeswoman for one of them, Carlina Rivera, said that Ms. Rivera “looks forward to earning his vote but will not be seeking his endorsement.”

In addition to Ms. Rivera, a Manhattan city councilwoman, other leading candidates include Representative Mondaire Jones, who moved to the district this summer from suburban Westchester; Assemblywomen Yuh-Line Niou of Manhattan and Jo Anne Simon of Brooklyn; Daniel Goldman, a former federal prosecutor who helped build the impeachment case against Donald J. Trump; and Elizabeth Holtzman, the former congresswoman, district attorney and city comptroller.

The contest has grown increasingly fractious, with the latest sign coming Tuesday afternoon in the aftermath of remarks Mr. Goldman made in an interview with Hamodia, the Orthodox Jewish news organization.

Mr. Goldman initially said he would support limiting abortion past the point of fetal viability, after roughly 23 or 24 weeks of pregnancy, unless the life of the mother was in danger — a position roughly consistent with New York State law. But after conferring with an aide, he changed his answer to say he did not support any abortion limits.

Abortion had already become a major issue in the race in the wake of the Supreme Court’s decision overturning Roe v. Wade last month. With few ideological divisions among them, Mr. Goldman’s opponents quickly took the comments as an opening to attack him as hostile to women’s rights and too conservative.

“American women are living a waking nightmare right now, literally bleeding out, because of the fatal ignorance of people like Dan Goldman,” Ms. Niou said.

Ms. Holtzman, who came out of political retirement because of the court’s actions around abortion, called on Mr. Goldman to drop out of the race. “Congress has enough lukewarm Democrats who won’t fight like hell to codify Roe v. Wade into federal law,” she said.

In a statement, Mr. Goldman said he misspoke and that he believed “the decision to have an abortion is a health care decision that needs to be made between a woman and her doctor.”

Ms. Rivera, meanwhile, was in her own hot water over recent comments to the same publication in which she appeared to say that she would be open to allowing certain businesses to be exempt from anti-discrimination laws for religious reasons. Ms. Cass later clarified that Ms. Rivera thought she was answering a different question and supported no such exemption.

As for Mr. de Blasio, he did not say what he would do next. In an interview in May, he said that before jumping into the race he had planned to do television political commentary and potentially teach.

He still faces hundreds of thousands of dollars in outstanding debts related to previous campaigns, including money owed to the city. He had $450,000 in his congressional campaign account at the end of June, according to federal campaign filings, and could try to use some of those funds to pay off creditors.

“The law may be sufficiently porous to allow a transfer to pay off his presidential campaign debts,” said Jerry H.​ Goldfeder, a Democratic election lawyer in New York. “But the ethical course would be to return contributions to those who supported his congressional campaign.”

Debts and all, there was little sympathy for Mr. de Blasio on Tuesday, particularly among those who tangled with him while mayor.

“The former mayor was a divisive force in the city at a time when we needed a leader who could unite us,” said Kathryn Wylde, president of the Partnership for New York City, an influential business group. “Apparently the voters in District 10 did not want to give him another bully pulpit from which to rail against those who disagree with his political ideology.”

We wish him good luck in his future endeavors!