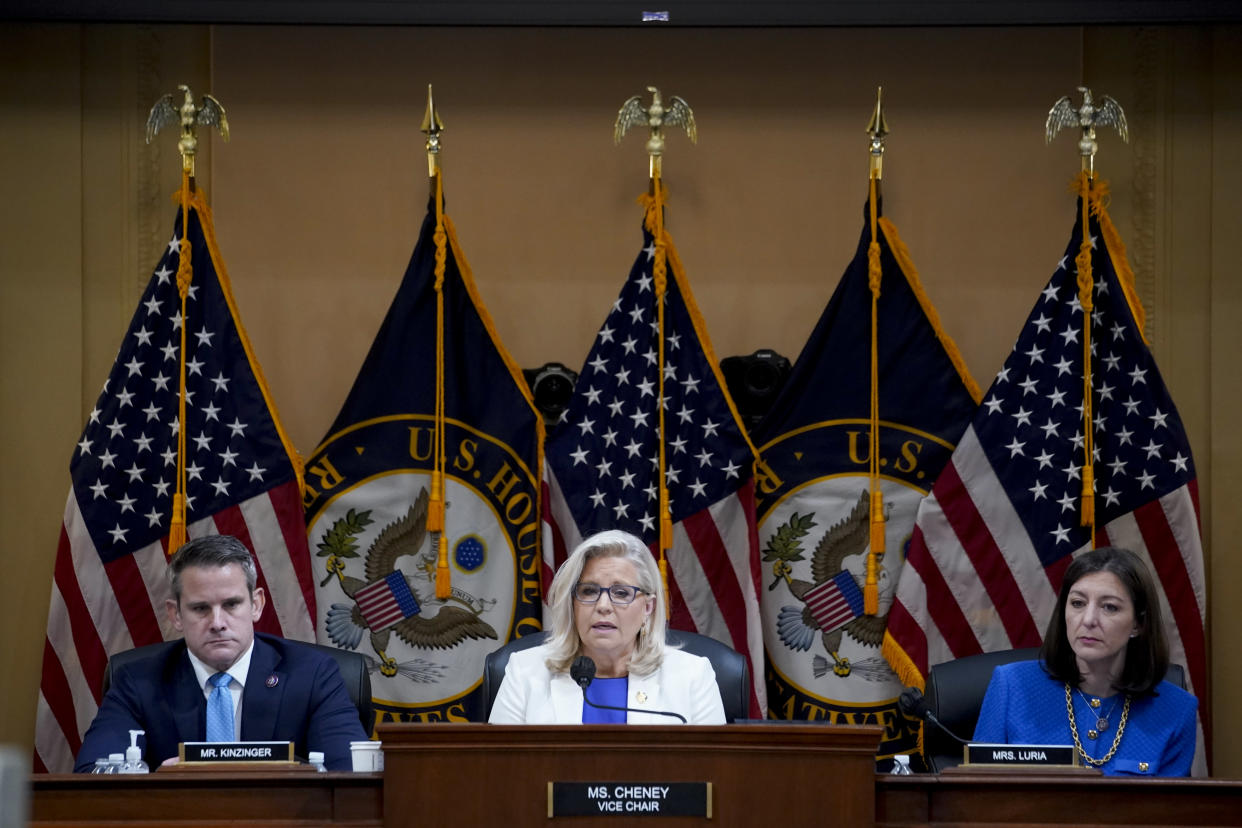 The House Jan. 6 committee ended its set of summer hearings with its most detailed focus yet on the investigation’s main target: former President Donald Trump.

The panel on Thursday examined Trump’s actions on Jan. 6, 2021, as hundreds of his supporters broke into the U.S. Capitol, guiding viewers minute-by-minute through the deadly afternoon to show how long it took for the former president to call off the rioters. The panel focused on 187 minutes that day, between the end of Trump’s speech calling for supporters to march to the Capitol at 1:10 p.m. and a video he released at 4:17 p.m. telling the rioters they were “very special” but they had to go home.

Trump was “the only person in the world who could call off the mob,” but he refused to do so for several hours, said the committee’s chairman, Mississippi Rep. Bennie Thompson, who participated in the hearing remotely due to a COVID-19 diagnosis. “He could not be moved.” Here are major taeaways from the hearing courtesy of the Associated Press.

The panel emphasized where Trump was as the violence unfolded — in a White House dining room, sitting at the head of the table, watching the violent breach of the Capitol on Fox News. He retreated to the dining room at 1:25 p.m., according to Rep. Elaine Luria, D-Va., one of two members who led the hearing. That was after some rioters had already breached barriers around the Capitol — and after Trump had been told about the violence within 15 minutes of returning to the White House.

Fox News was showing live shots of the rioters pushing past police, Luria said, showing excerpts of the coverage.

In video testimony played at the hearing, former White House aides talked about their frantic efforts to get the president to tell his supporters to turn around. Pat Cipollone, Trump’s top White House lawyer, told the panel that multiple aides — including Trump’s daughter, Ivanka Trump — advised the president to say something. “People need to be told” to leave, Cipollone recalled telling the president, urging Trump to make a public announcement. “Fast.”

Trump “could not be moved,” Thompson said, “to rise from his dining room table and walk the few steps down the White House hallway into the press briefing room where cameras were anxiously and desperately waiting to carry his message to the armed and violent mob savagely beating and killing law enforcement officers.”

NO CALLS FOR HELP

As he sat in the White House, Trump made no efforts to call for increased law enforcement assistance at the Capitol. Witnesses confirmed that Trump did not call the defense secretary, the homeland security secretary or the attorney general.

The committee played audio of Gen. Mark Milley, chairman of the Joint Chiefs of Staff, reacting with surprise to the former president’s reaction to the attack. “You’re the commander-in-chief. You’ve got an assault going on on the Capitol of the United States of America. And there’s Nothing? No call? Nothing Zero?” Milley said.

As Trump declined to call for help, Vice President Mike Pence was hiding in the Capitol, just feet away from rioters who were about to breach the Senate chamber. The committee played audio from an unidentified White House security official who said Pence’s Secret Service agents “started to fear for their own lives” at the Capitol and called family members in case they didn’t survive.

Shortly afterward, at 2:24 p.m., Trump tweeted that Pence didn’t have the “courage” to block or delay the election results as Congress was certifying Joe Biden’s presidential victory.

“He put a target on his own vice president’s back,” said Luria.

Matt Pottinger, who was Trump’s deputy national security adviser at the time, and Sarah Matthews, then the deputy press secretary, testified at the hearing. Both resigned from their White House jobs immediately after the insurrection.

Both Pottinger and Matthews told the committee of their disgust at Trump’s tweet about Pence.

Pottinger said he was “disturbed and worried to see that the president was attacking Vice President Pence for doing his constitutional duty,” which he said was “the opposite of what we needed at that moment.”

“That was the moment I decided I was going to resign,” Pottinger said.

Matthews said the tweet was “essentially him giving the green light to those people,” and said Trump’s supporters “truly latch on to every word and every tweet.”

She also described a debate within the press office about whether the violence should be condemned — and her frustration that such a debate was even happening, and that they were debating the politics of a tweet.

Matthews said she pointed to the television. “Do you think it looks like we are effing winning? Because I don’t think it does,” she said. 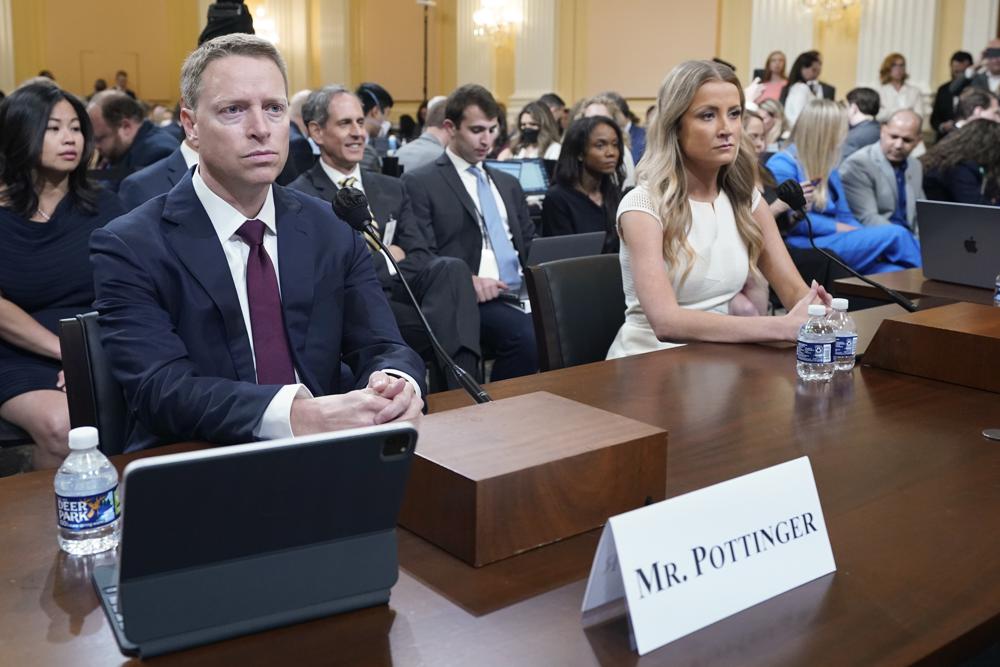 Matt Pottinger, who was Trump’s deputy national security adviser at the time, and Sarah Matthews, then the deputy press secretary, testified at the hearing.

The committee showed some of the texts that were sent to Trump’s chief of staff, Mark Meadows, as White House aides tried to get the president to act. Meadows turned the texts over to the panel before he stopped cooperating.

“This is one you go to the mattresses on,” Donald Trump Jr., the president’s son, texted Meadows. “They will try to f— his entire legacy on this if it gets worse.”

“Mark, he needs to stop this, now,” texted Mick Mulvaney, Meadows’ former GOP House colleague and the former director of the Office of Management and Budget.

As some of the worst of the fighting at the Capitol was still underway, and had been going on for hours, Trump put out the video at 4:17 p.m.

The committee showed video of Trump filming the statement, and a copy of the script that he ignored. “I am asking you to leave the Capitol Hill region NOW and go home in a peaceful way,” the script said.

But the president did not actually say that, instead repeating baseless claims of voter fraud without condemning the violence. “So go home. We love you. You’re very special,” Trump ended up saying. “I know how you feel.”

In video testimony, Trump’s son-in-law Jared Kushner said he got there as the filming ended, and “I think he was basically retiring for the day.”

The committee showed video from the Capitol siege at that exact moment — rioters trying to violently push through the main doors, battering officers who had been fighting for hours. Police radio traffic relayed, “Another officer unconscious.”

The committee showed never-before-seen outtakes of a speech prepared for Trump on Jan. 7 in which he was supposed to say the election was over. But he bristled at that line, telling a roomful of supporters, “I don’t want to say the election is over.”

In the outtakes, Trump was visibly angry — at one point hitting his hand on the podium — as he worked through the prepared remarks, with his daughter Ivanka and others heard chiming in with suggestions.

In the final video, Trump condemns the violence and says: “Congress has certified the results, and new administration will be inaugurated on January 20. My focus now turns to ensuring a smooth, orderly and seamless transition of power.”

‘WE HAVE CONSIDERABLY MORE TO DO’

At the beginning of the hearing, Thompson and Wyoming Rep. Liz Cheney, the committee’s Republican vice chair, announced that the panel would “reconvene” in September to continue laying out their findings.

“Doors have opened, new subpoenas have been issued and the dam has begun to break,” Cheney said of the committee’s probe. “We have considerably more to do. We have far more evidence to share with the American people and more to gather.”

All of the major networks (CBS, NBC, ABC, MSNBC, AND CNN) aired the hearings last night except Fox News.  That is because the folks at Fox cannot stand the truth!.