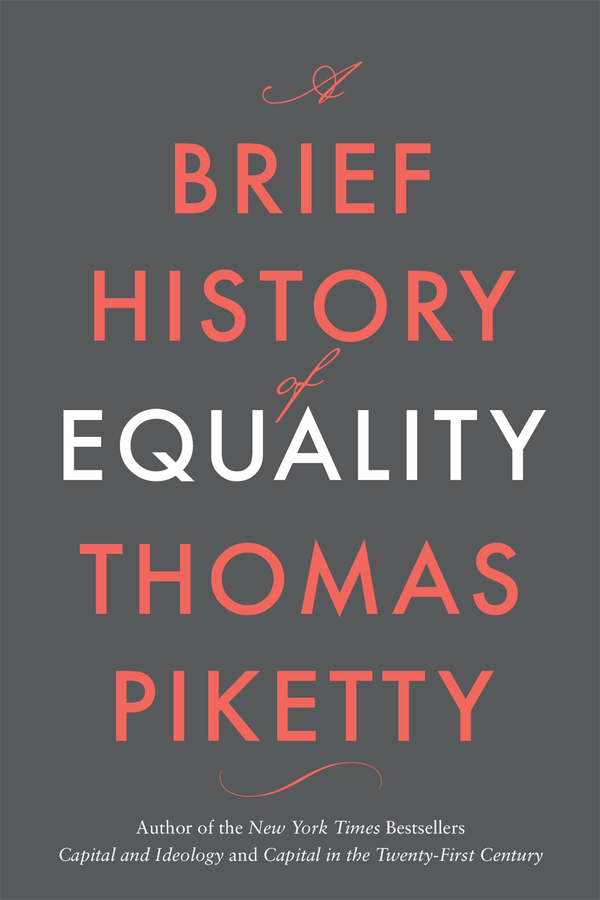 The French economist, Thomas Piketty, has a new book entitled, A Brief History of Equality, that is a fine addition to his earlier publications such as Capital in the Twenty-First Century and Capital and Ideology. Unlike his earlier tomes that exceeded well over a thousand pages, this book is a mere 275 pages.  In A Brief History…,  he guides us through two centuries of the growth of capitalism, revolutions, slavery, colonialism, wars and the building of the welfare state.  While inequality is still present in the world society, Piketty shows through a display of socioeconomic indicators, that humanity has moved fitfully toward a more just distribution of income and assets, a reduction of racial and gender inequalities, and greater access to health care, education, and the rights of citizenship. Piketty also cautions that these indicators, “and statistics in general, are nothing more than imperfect, temporary, and fragile constructions.”  Piketty predicts that the world’s current period of “hypercapitalism is doomed” and will  be replaced.  How, with what,  and when is difficult to determine.

If you enjoyed Piketty’s earlier work, you will like A Brief History of Equality,

Nicholas Lemann, who teaches at the Columbia Journalism School, wrote a review that appeared in the New York Times (see below).

A BRIEF HISTORY OF EQUALITY
By Thomas Piketty

Thomas Piketty begins his latest book by genially mentioning the entreaties he gets to write something short — previous books have been around 1,000 pages long — and ends it by expressing the hope that he has given “citizens,” rather than economists, new weapons in the battle against inequality, which is his master subject. This shouldn’t be taken for a sign that “A Brief History of Equality” is consciously simplified. It isn’t centered on a new economic finding, like that in “Capital in the Twentieth Century,” where Piketty reported that the return to capital exceeds the rate of economic growth. But neither is it written in a tone of patient explanation. It’s useful as an opportunity for readers to see Piketty bring his larger argument about the origins of inequality and his program for fighting it into high relief.

Much of the current discussion of inequality focuses on the period since 1980, when the benefits of growth began to go much more narrowly to the rich than they had before. Although Piketty hardly disputes this, he announces here that he has come to tell an optimistic story, of the world’s astounding progress toward equality. He does this by creating a much wider temporal frame, from 1780 to 2020, and by focusing on politics and measures of well-being as well as economics. Life expectancy has gone from 26 to 72 and, with the rise of compulsory state-provided education, the literacy rate from about 10 percent to 85 percent. Slavery and colonialism, once endemic, have been substantially abolished. Perhaps half of the population of the developed world is at least middle class, though before the 20th century there was no middle class to speak of. The right to vote, formerly restricted even in democracies to male property owners, is well on its way to becoming universal.

What caused this progress? Piketty has a straightforward answer: the advent of progressive taxes on income and wealth, and of the comprehensive welfare state. The taxes reduced inequality and paid for the welfare state, which has provided education, health care, old-age pensions and protection against severe deprivation. Our culture’s familiar assertions about how growth, innovation and entrepreneurship are connected with general prosperity stand completely outside Piketty’s account. Instead, he says, property owners have always used their excessive influence over government to create systems of “military and colonial domination” and environmental despoliation that made them even more wealthy than they were already. The idea that growth can solve the world’s economic woes is “totally insane.” Only a substantial weakening of property rights — a process that in the past included the abolition of slavery, but has many more steps to take — can do that.

Piketty writes as a citizen of the world, suspicious of nationalism, but his thinking strikes this American reader as noticeably European — indeed, specifically French. In the United States, when we think about the very rich, the people who usually come to mind are workaholic high earners in technology, finance and corporate executive suites. Piketty, who is more concerned with property than with earnings, thinks about rentiers, individuals who aren’t so different from the pre-revolutionary French nobility, except that they have converted their clout into financial assets rather than feudal land holdings.

Although Piketty favors much higher income tax rates (“virtually confiscatory tax rates have been an immense historical success”), policies that redistribute property rather than income are the heart of his program. These would include reparations for descendants of enslaved and colonized people, encouraging countries in the global south to tax the fortunes of nonresidents who do business there, cancellation of debts and a program he calls “inheritance for all,” in which wealth taxes would reduce large fortunes and provide everyone with a financial cushion. He would also take a large measure of control over corporations away from their managers and shareholders and give it to employees, and create “a system of egalitarian funding for political campaigns, the media and think tanks.” All this would amount to “a profound transformation of the world economic system.”

The name that Piketty gives to his program is participatory socialism. On economic issues it is considerably to the left of what American liberals are used to considering. (It’s another sign of Piketty’s Europeanness that he uses “liberal” to denote Ronald Reagan-style economic policies, and yet another that he is far more uncomfortable than the mainstream of the Democratic Party with long-running race-conscious policies aimed at helping minorities, lest they encourage “identitarian introversion.”) He is well aware that changes on the scale he is proposing never happen incrementally. Significant movement in the right direction, by his lights, has always required wars, revolutions, economic depressions and “political movements of great scope.”

Are such upheavals on their way? Piketty doesn’t make predictions, but he treats the current system of “hypercapitalism” as being obviously doomed. Other than socialism, the only real alternatives are authoritarianism, Chinese-style Communism or “reactionary projects” like ISIS. And political reform won’t be sunny: “The idea that there might be only winners is a dangerous and anesthetizing illusion that must be abandoned immediately.” He’s right that wholesale change on the order he considers necessary is rare, and usually associated with calamity. Incremental adjustments, however, happen constantly. Absent disaster, it seems possible, or even likely, that they will move economic policy in the direction Piketty would want — away from the market-friendliness of the late 20th century — though to an extent that he would consider pathetically inadequate. That may be happening already. If it is, his work, with its determination to move outside what had been the terms of the debate, is partly responsible.