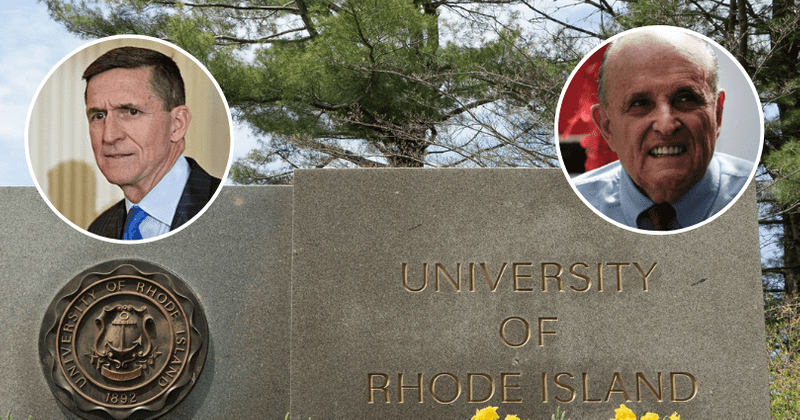 The University of Rhode Island on Friday stripped one-time national security adviser Michael Flynn and Rudy Giuliani of their honorary degrees for failing to uphold the institution’s standards and values.

The men “no longer represent the highest level of our values and standards that were evident when we first bestowed the degree,” said university President Marc Parlange after recommending the action following an investigation.

“As a civic institution, URI has the privilege and responsibility to sustain and preserve American democracy by inspiring and modeling good citizenship,” Parlange said. “Revoking these honorary degrees reinforces our values and allows us to lead with truth and integrity.”

The university’s Honorary Degree Committee specifically faulted Giuliani’s role in the lead up to the Capitol riot in January 2021. “His words encouraged domestic terrorist behavior aimed at preventing Congress from certifying the outcome of the 2020 presidential election,” it said.

The committee also noted that Giuliani has been barred from practicing law in Washington, D.C., and New York “for his unfounded claims of rampant fraud during the 2020 presidential election.”

As for Flynn, he pleaded guilty to “willfully and knowingly” lying to the FBI during former special counsel Robert Mueller’s investigation into Russian meddling in the 2016 election, the committee noted.

The committee also cited two speeches by Flynn — one in Dallas in which he said “a military coup was needed in the U.S.,” and another in San Antonio, Texas, in which he “called for the establishment of ‘one religion’ in the U.S.”

Flynn was awarded an Honorary Doctorate of Humane Letters by the university in 2014. Giuliani was given a Doctor of Laws Honoris Causa in 2003.

Good gesture on the part of URI to separate any connection with these two sycophantic Trump associates!