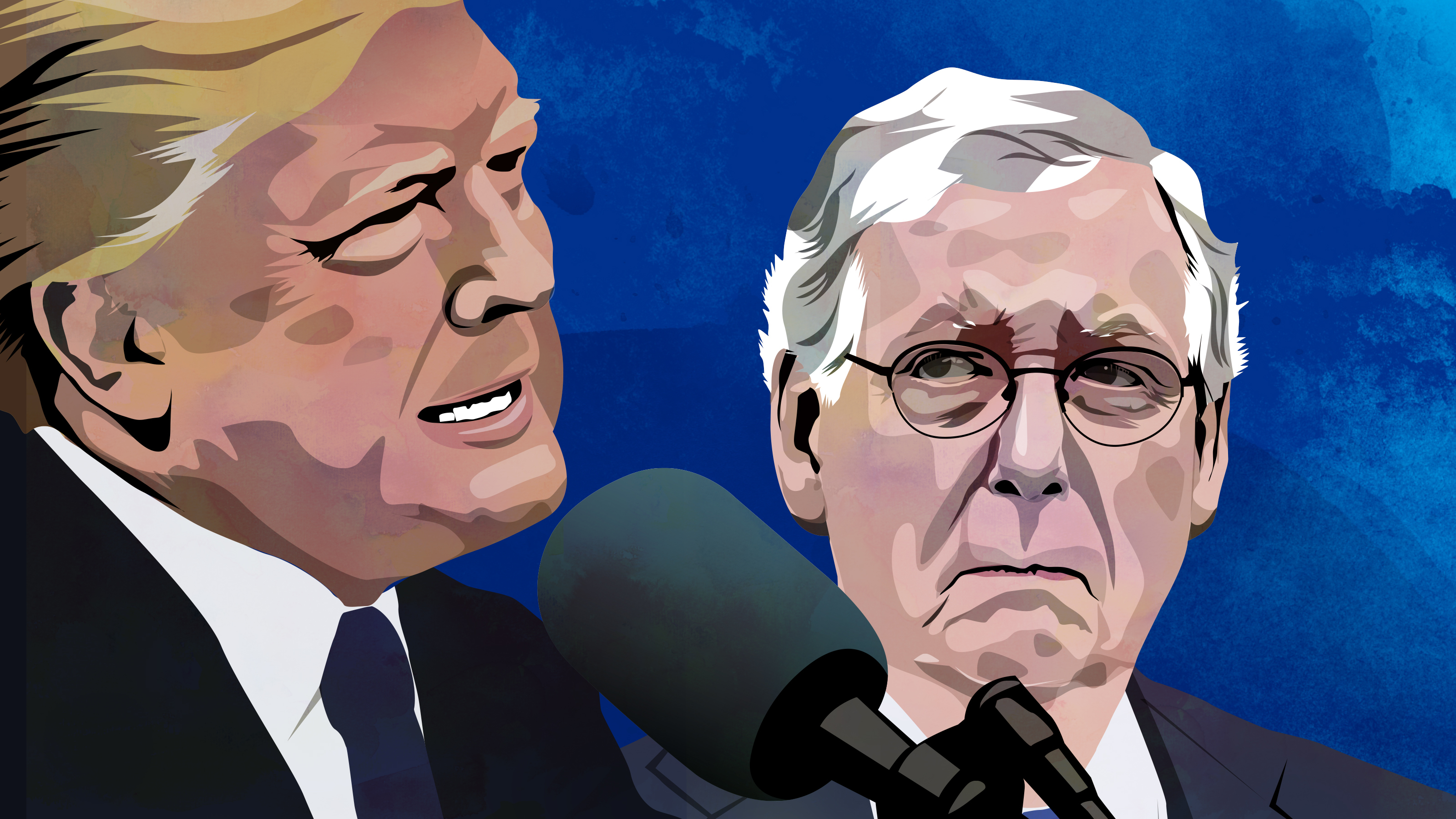 Donald Trump launched a scathing salvo at Senate Minority Leader Mitch McConnell yesterday, in response to McConnell’s op-ed in the Wall St. Journal blaming him for the Jan. 6 riot at the U.S. Capitol. In the op-ed McConnell stated:  “There is no question former President Trump bears moral responsibility. His supporters stormed the Capitol because of the unhinged falsehoods he shouted into the world’s largest megaphone…His behavior during and after the chaos was also unconscionable, from attacking Vice President Mike Pence during the riot to praising the criminals after it ended.”

In response, Trump stated “The Republican Party can never again be respected or strong with political ‘leaders’ like Sen. Mitch McConnell at its helm,” Trump wrote in a written statement. “McConnell’s dedication to business as usual, status quo policies, together with his lack of political insight, wisdom, skill, and personality, has rapidly driven him from Majority Leader to Minority Leader, and it will only get worse…. [McConnell] is a dour, sullen, and unsmiling political hack” and called on Republicans in the chamber to find a new leader.”

The U.S. Senate voted on Saturday to acquit Trump of the charge of “incitement of insurrection” in relation to the siege of the Capitol that followed the former president’s Jan. 6 rally in Washington. While McConnell did not join the seven Republicans who voted to convict Trump, he issued a searing assessment of the ex-president’s behavior in a speech given on the Senate floor and published in the  op-ed yesterday in the Wall Street Journal that laid blame for the violence at Trump’s feet.

Maggie Haberman and Jonathan Martin have an article (see below)  in today’s New York Times reviewing the give and take between McConnell and Trump.

Trump, in Scorching Attack on McConnell, Urges G.O.P. to Replace Him

Former President Donald J. Trump on Tuesday made a slashing and lengthy attack on Senator Mitch McConnell, the Republican minority leader, calling him a “dour, sullen, and unsmiling political hack” and arguing that the party would suffer losses in the future if he remained in charge.

“If Republican senators are going to stay with him, they will not win again,” Mr. Trump said.

The 600-word statement, coming three days after the Senate acquitted him in his second impeachment trial, was trained solely on Mr. McConnell and sought to paint Mr. Trump as the best leader of the G.O.P. going forward.

The statement did not include any sign of contrition from Mr. Trump for his remarks to a crowd of supporters who then attacked the Capitol on Jan. 6. Nor did it include any acknowledgment of his role during the violent hours in which his own vice president and members of Congress were under threat from the mob of Trump supporters.

Rather, Mr. Trump chose to focus on Mr. McConnell as he broke an unusually lengthy silence by his standards, after being permanently barred from his formerly favorite medium — Twitter — last month because of tweets that he posted during the Capitol riot.

Mr. McConnell’s office declined to comment on Mr. Trump’s attacks on Tuesday, but the senator has left little mystery about his contempt for the former president. Shortly after he joined the majority of Republican senators on Saturday in voting to acquit Mr. Trump on the House impeachment charge of “incitement of insurrection,” Mr. McConnell excoriated Mr. Trump, laying the blame for the deadly riot at his feet and suggesting that further investigations of the former president could play out in the judicial system.

“There is no question, none, that President Trump is practically and morally responsible for provoking the events of the day,” Mr. McConnell said in remarks on the Senate floor.

His comments were widely interpreted as an attempt to minimize Mr. Trump’s brand of politics within the Republican Party and to appeal to donors who have said they are rejecting the party after some senators voted against certifying President Biden’s victory.

Mr. McConnell wrote a Wall Street Journal op-ed article and gave an interview to the paper’s news section suggesting he might get involved in primaries for 2022 as part of an effort to win back the majority.

In private, Mr. McConnell has said he believed the impeachment proceedings would make it easier for Republicans to eventually purge Mr. Trump from the party. And he expressed surprise, and mild bemusement, at the hatchet-burying mission made to Mar-a-Lago, Mr. Trump’s private

In public, Mr. McConnell has sharply criticized Representative Marjorie Taylor Greene, the extremist freshman and Trump devotee from Georgia, while defending Representative Liz Cheney of Wyoming after her vote to impeach the former president.

What Mr. McConnell has not done, though, is openly declare political war on Mr. Trump in the fashion that the former president did to him on Tuesday. While telling associates he knew he would have to oppose the former president in some primaries next year, he had hoped to unify his caucus by turning attention to Mr. Biden.

But if Mr. McConnell wasn’t eager to begin an open and protracted feud with Mr. Trump, at least not yet, the freshly acquitted, ever-pugnacious and newly deplatformed former president was happy to do so. One person close to Mr. Trump said his initial version of the statement was more incendiary than what was released publicly.

In the statement, Mr. Trump resorted to insults about Mr. McConnell’s acumen and political abilities, and faulted him for Republicans’ loss of their Senate majority.

“The Republican Party can never again be respected or strong with political ‘leaders’ like Sen. Mitch McConnell at its helm,” Mr. Trump said. “McConnell’s dedication to business as usual, status quo policies, together with his lack of political insight, wisdom, skill, and personality, has rapidly driven him from majority leader to minority leader, and it will only get worse.”

Mr. Trump offered up some new taunts: “The Democrats and Chuck Schumer play McConnell like a fiddle — they’ve never had it so good — and they want to keep it that way!” he said. “We know our America First agenda is a winner, not McConnell’s Beltway First agenda or Biden’s America Last.”

While Mr. McConnell has faulted the former president for the party’s losses last month in both Senate races in Georgia, Mr. Trump maintained that it was because Republican voters were angry that the party’s officials had not done more to address his baseless claims of widespread voter fraud.

Mr. Trump claimed credit for Mr. McConnell’s victory in his own Senate race last year and took a swipe at Mr. McConnell’s wife, Elaine Chao, who worked for the Trump administration as the transportation secretary.

“McConnell has no credibility on China because of his family’s substantial Chinese business holdings,” Mr. Trump said. “He does nothing on this tremendous economic and military threat.”

“He will never do what needs to be done, or what is right for our country,” Mr. Trump said, adding that “where necessary and appropriate, I will back primary rivals who espouse Making America Great Again and our policy of America First.”

After Mr. Trump made his statement on Tuesday, some of Mr. McConnell’s longtime supporters suggested that they knew bait when they saw it.

Others in Mr. McConnell’s intensely loyal circle of advisers, however, did not want such a bald attack to go unanswered.

“It seems an odd choice for someone who claims they want to lead the G.O.P. to attack a man who has been unanimously elected to lead Senate Republicans a history-making eight times,” said Billy Piper, another former top McConnell aide. “But we have come to expect these temper tantrums when he feels threatened — just ask any of his former chiefs of staff or even his vice president.”

Mr. Trump’s reference to Ms. Chao’s family was also a line of attack that Mr. McConnell and his inner circle have long denounced as racist when it comes from Democrats.

The former president’s statement was the longest one he has issued since leaving office on Jan. 20. He has been mindful that he is the target of multiple investigations, people close to him said, and has been advised against appearing to taunt prosecutors or people who might sue him in civil courts. Still, Mr. Trump’s ability to stay silent through situations that anger him tends to last only so long.

Mr. Trump’s advisers are discussing backing nearly a dozen candidates in primaries against the Republicans who voted in favor of impeachment, a move that would only deepen Mr. Trump’s friction with Mr. McCarthy. Not all of Mr. Trump’s aides think this is a wise course of action.