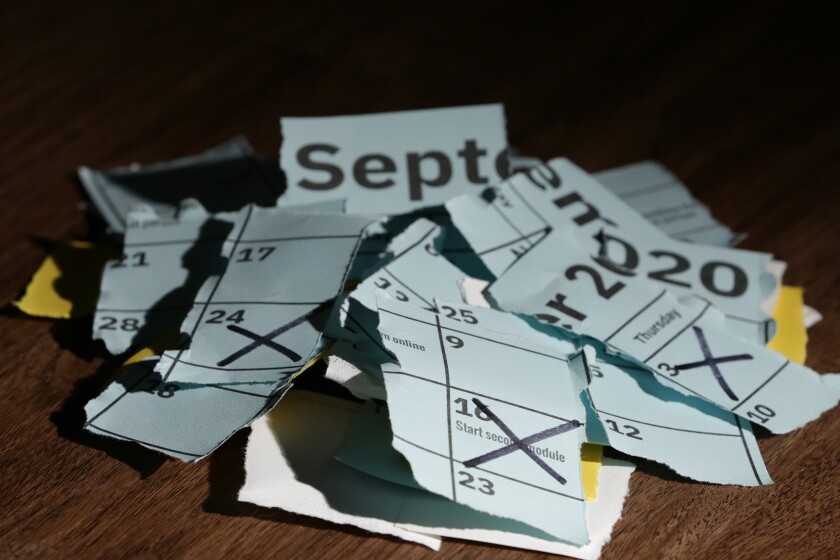 I have posted several times on this blog that colleges have to approach opening their campuses to in-person instruction  very carefully.  Back in June I commented that colleges that do re-open are “only one keg party away from a health catastrophe.”

The Chronicle of Higher Education has been reporting for the past four days how hopes for reopening campuses this fall are “crumbing” at many colleges across the country.  The list includes Notre Dame, UNC Chapel Hill,  Morehouse, Spelman, Clark Atlanta, and Emory.

The decisions to reopen and then close have been  predicted, even as some presidents declared that they planned to bring students back for fall classes. In planning to reopen, colleges have cited the benefits to in-person learning, the disparities in technology access off campus, and detailed safety plans. There is also a clear financial incentive to bring students back; fees for housing and dining are significant portions of operating budgets.

The University of California at Berkeley’s chancellor, Carol T. Christ, announced at a Chronicle event on Monday that Berkeley — which had planned to have some students on campus and to hold some classes in-person — will begin its fall semester online.

The Bay Area, Christ said, is not “at a phase at which higher education is permitted to open under public-health orders.” And earlier this month, Berkeley announced 47 new student cases in one week, with most connected to Greek parties.

Berkeley typically has 6,000 classes in the fall, but the university was planning to offer only about 300 face-to-face classes in a hybrid model, Christ said. In-person instruction, Christ said, would have been reserved for courses that would be difficult to replicate online, including complex labs, performing arts, and field work. But the prospect of students, faculty, and staff members returning in the fall constituted what Christ and her team began to describe as a “mass migration event.”

“How do you handle a mass migration event in a way that doesn’t provide seeds for outbreaks?” Christ said.

The answer, Berkeley officials concluded, is: You don’t.

“The fraternity outbreak gave us a glimpse of how congregate living could really seed infections,” Christ said.

An outbreak that stems from a fraternity party is just the sort of thing that many professors say they worry about when assessing the safety of returning to in-person instruction. Regardless of behavior pledges, which colleges have considered as a way of promoting safety amid the pandemic, some people find it difficult to believe that young college students will party together in masks and maintain six feet of physical distance once the alcohol starts flowing.

“Of course it’s a reasonable concern,” Christ said. “It’s what college presidents and chancellors talk about all the time.”

“We’re social animals,” she continued, “and one of the big motivations of going to college is to be with your peers and have this life-transforming experience. The experience we were imagining in the fall isn’t what anyone would imagine a college-going experience to be like.”

But in the face of rising cases nationally, and as faculty and students raise safety concerns, colleges have said they can’t pull it off.