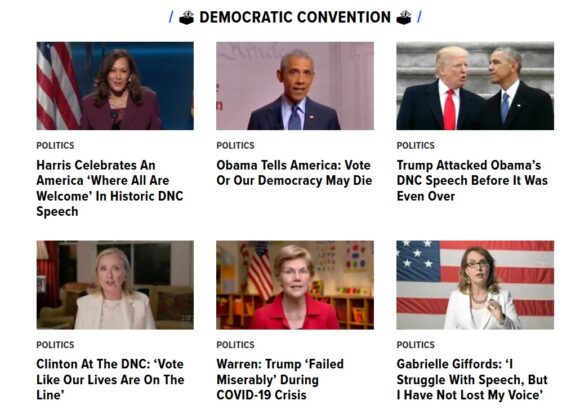 The Democratic National Convention was in full gear last night.  The graphic above captures some of the highlights.

My favorite presentations were Kamala Harris (see below) especially when she said about Donald Trump:  “I know a predator when I see one!”

And Barack Obama (see below);

“For close to four years now, Trump has shown no interest in putting in the work; no interest in finding common ground; no interest in using the awesome power of his office to help anyone but himself and his friends; no interest in treating the presidency as anything but one more reality show that he can use to get the attention he craves.

Donald Trump hasn’t grown into the job because he can’t. And the consequences of that failure are severe. 170,000 Americans dead. Millions of jobs gone while those at the top take in more than ever. Our worst impulses unleashed, our proud reputation around the world badly diminished, and our democratic institutions threatened like never before.”