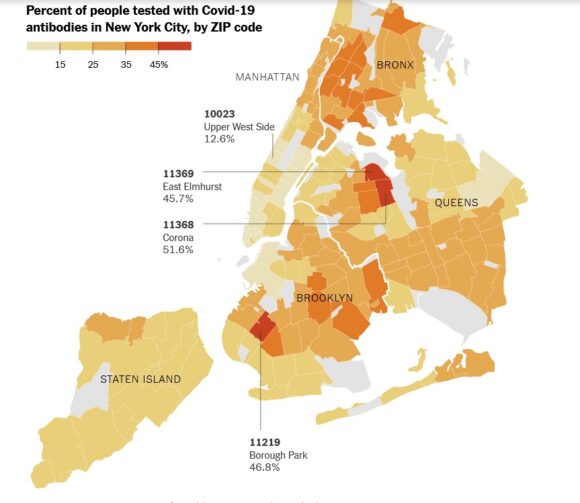 On Tuesday, New York City released more than 1.46 million coronavirus antibody test results, the largest number to date, providing evidence of how the virus penetrated deeply into some lower-income communities while passing more lightly over affluent parts of the city.

Across the city, more than 27 percent of those tested had positive antibody results. The borough with the highest rate was the Bronx, at 33 percent. Manhattan had the lowest rate, at 19 percent.  In one ZIP code in Queens, more than 50 percent of people who had gotten tested were found to have antibodies, a strikingly high rate. But no ZIP code south of 96th Street in Manhattan had a positive rate of more than 20 percent.   As reported by the New York Times.

“The data is likely to renew discussion about whether some neighborhoods or communities in New York City may be nearing herd immunity — the point at which enough people have immunity that the virus is no longer able to spread widely within a community.

Until now, public data for antibody rates in New York City has been limited. CityMD, which plays a key role in the city’s testing program, had shared some data from its network of urgent care clinics.

Gov. Andrew M. Cuomo’s office had released some details from a survey — which involved testing some 28,419 people across the state — that suggested that roughly 21.6 percent of New York City residents had antibodies.

“This gives us a sense at a deeper level of the magnitude of the penetration of the infection into the population,” said Wafaa El-Sadr, an epidemiology professor at Columbia University.

Much remains unknown about the degree of protection against Covid-19 that antibodies may offer, or how long that protection may last. But the neighborhoods with more residents who were infected at the height of New York’s outbreak in March and April may be less likely to be among the hardest hit during a second wave.

On the other hand, neighborhoods in which few residents have been infected may find themselves more vulnerable in the event of a resurgence.

Some researchers have expressed hope that herd immunity for the new coronavirus may only require about half of the people in a given community to have immunity — while others have suggested a higher threshold, like 70 percent.

Of course, neighborhoods are not sealed off from one another, and even under the most optimistic predictions, most neighborhoods — and millions of New Yorkers — remain vulnerable to infection in a second wave.

Still, the relatively high prevalence of antibodies may partly explain why New York has not seen a significant uptick in cases over the past several months, even as the city has begun to reopen and some New Yorkers have begun to relax their social distancing.”

We will cautiously hope that an uptick in the coronavirus does not occur.