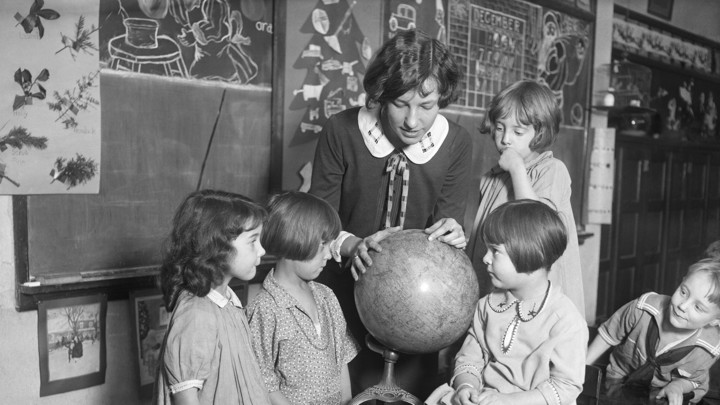 Justin Gerald, a student in Hunter College’s EdD Program, alerted me to this article that appeared in The Atlantic that women now make up a larger share of educators than they have in decades. According to the study, led by the University of Pennsylvania professor Richard Ingersoll, the nation has witnessed a “slow but steady” increase in the share of K–12 educators who are women. During the 1980–81 school year, roughly two in three—67 percent—public-school teachers were women; by the 2015–16 school year, the share of women teachers had grown to more than three in four, at 76 percent. (From 1987 to 2015, the size of the teaching force increased by more than 60 percent, from about 2.5 million to about 4.5 million, according to the recent report, which helps explain why the field tipped further female despite the rising number of men in the profession.)  Ingersoll’s data is important although not necessarily startling at least not for those of us in teacher education programs.  Regardless it would be beneficial if more men were in the profession especially in the primary and middle schools.  Below is the full article

The U.S. Teaching Population Is Getting Bigger, and More Female

Teaching in the United States was once considered a career for men. Then the profession’s gender composition shifted dramatically around the mid-19th century, when the country’s public-school system was born. As schoolhouse doors opened to children of all social classes and genders, so too did the education profession. By the late 1880s, women made up a majority—63 percent—of all the country’s teachers (though men continued to make up most of the high-school teaching force until the late 1970s). Within a few decades, the choice to teach young children was solidified as an inherently “feminine” pursuit; in fact, girls who couldn’t or didn’t want to be homemakers had few other job options.

In the mid-20th century, however, cultural and political shifts prompted a surge in the number of women seeking employment in traditionally “masculine” sectors. These changes also prompted the reverse—albeit to a lesser extent: The number of men seeking classroom careers rose and has grown by 31 percent since the early 1980s.

Yet despite this, the gender distribution in the profession has strangely grown more imbalanced, according to recently released data, largely because women are still pursuing teaching at far greater rates than men. According to the study, led by the University of Pennsylvania professor Richard Ingersoll, the nation has witnessed a “slow but steady” increase in the share of K–12 educators who are women. During the 1980–81 school year, roughly two in three—67 percent—public-school teachers were women; by the 2015–16 school year, the share of women teachers had grown to more than three in four, at 76 percent. (From 1987 to 2015, the size of the teaching force increased by more than 60 percent, from about 2.5 million to about 4.5 million, according to the recent report, which helps explain why the field tipped further female despite the rising number of men in the profession.)

The trend is “odd,” Ingersoll and his co-authors—all education scholars, and most of them former classroom teachers—write in the report. Generally speaking, starting in the 1970s the country’s occupations witnessed a significant decline in gender segregation, as the number of women in the workforce soared. An index that measures how many women or men would need to change jobs to achieve equal gender distribution across occupations fell 26 percent from 1972 to 2002, when it was at its lowest point, according to a 2010 report by the Institute for Women’s Policy Research.

Ingersoll and his research team highlight the rising proportion of women who are, for example, physicians (from 10 percent in 1972 to 40 percent in 2018, according to Bureau of Labor Statistics data and federal surveys), lawyers (from 4 percent to 37 percent over the same time period), and pharmacists (13 percent to 63 percent). Other research shows that fewer female college students are seeking teaching degrees: In the late 1970s, roughly a third of the women enrolled in U.S. colleges were majoring in education; today the share has dropped to 11 percent.

What explains these contradictory trends? Much of it comes down to misunderstandings of what teaching entails and how those assumptions intersect with gender norms. Unlike in many other countries, in the United States, teaching has long been seen as a relatively low-status profession. In 2018, a survey of people in roughly three dozen countries asked respondents to rank 14 different professions—including teaching, medicine, law, social work, and website engineering—by each career’s perceived social status. On the one hand, survey participants in the United States gave teachers a middling ranking, and tended to liken them to librarians; respondents in countries such as China and Malaysia, on the other hand, put teachers in first place, analogizing them to doctors.

This cultural disregard for teaching has a gendered consequence: The status of a given career tends to correlate with the share of men in that profession—higher status equals more men, generally speaking. And that has its own consequence: Research has found that employers place less value on work done by women than on that done by men. These trends reinforce each other in perpetuity.

Within a given field, the more prestigious positions attract more men. Notably, close to half of all principals today, including two-thirds of those serving high schools, are men, as are more than three-quarters of school-district superintendents. Additionally, nine in 10 elementary-school educators are women, according to Ingersoll’s study, compared with six in 10 of their high-school counterparts. Prekindergarten in particular is heavily dominated by women, perhaps because younger kids might be dismissed as requiring little more than “Wheels on the Bus” sing-alongs.

Julio González, a 23-year-old pre-K educator at a public bilingual school on Chicago’s Lower West Side, admitted that he bought into such stereotypes when Teach for America first offered him the job a little more than a year ago, straight out of the University of Texas at Austin. “I made sure to ask people, like, ‘Is this an actual job, or am I just a glorified babysitter?’ ” he recalls. A first-generation Mexican American who dreamed of becoming a lawyer so he could advocate for low-income communities like his own, González eventually realized that teaching might be a more effective way to serve those communities. After all, an individual’s racial and gender biases tend to develop at a very young age.

Prestige is not a merely notional idea, as it tends to correlate tightly with compensation. The fact that prekindergarten classrooms have difficulty “attracting men as early-childhood teachers is hardly surprising,” Marcy Whitebook, who co-directs UC Berkeley’s Center for the Study of Child Care Employment, said in an email, given that work as a pre-K teacher “is seen as a pathway to poverty.”

Teachers overall tend to have pretty meager salaries. The ACT, which every year surveys a pool of test-takers on their career aspirations, found that among respondents who said they were “potentially” interested in a job as a K–12 teacher, as opposed to definitely interested or definitely not interested, low pay was the sticking point that made them unsure. Average teachers’ salaries have remained essentially flat since the 1990s after controlling for inflation, according to a report published last year by the nonprofit Education Resource Strategies (ERS), and grew just 7 percent in the two decades before that. Using a metric developed by MIT researchers, the ERS report found that in most states, K–12 educators’ salaries fall below the living wage. And usually, the younger the students, the lower their teacher’s pay, as a 2018 report on early-childhood educators shows.

Women might be more willing to accept teaching’s low wages because the profession is, in theory, more amenable than other careers to the needs of women. Mothers, for instance, are more likely now than ever before to desire employment, yet still tend to bear most of the child-rearing responsibilities. The school day tends to end two or so hours before that of typical American workers. A 9-to-5 workday, as Kara Voght has reported for The Atlantic, creates a challenge for parents who have to coordinate and pay for child care (or leave their kids unsupervised) during that time gap. The notion that teachers enjoy shortened work days and summers exempt from work-related duties is little more than a myth, but teachers who are parents are often at least on a schedule a little more conducive to their children’s needs.

One effect of the gender imbalance could be that younger students have fewer opportunities to interact with positive male role models. “As a black male teacher, sometimes I feel like a unicorn,” said Charles Jean-Pierre, a D.C. Public Schools art and French teacher. He said the black male teachers he had as a child of immigrants in Chicago motivated him to embrace his passion for art and become a teacher himself. “I think it’s important for students to experience joy, nurturing, and compassion from men … Male teachers embody hope and love for many students who do not see that on a daily basis [from men] in their homes.”

But men who do this work might confront wariness about their abilities, or suspicions about their intentions for working with young children. Ingersoll cited research published in one 1993 book about men in traditionally “feminine” occupations finding that among elementary-school teachers, men who were perceived as too “male” were dismissed as incapable of working with young children, while men who weren’t “male enough” were suspected of being child molesters. “You have to sort of work it out so you’re the right amount of maleness,” Ingersoll told me. “It’s tiresome, and so a lot of the male elementary teachers say after a while, ‘This is just too draining.’ ” Both González and Jean-Pierre said that they’re always aware of the latter concern, ensuring that another adult is always in the classroom and forging strong relationships with parents.

But the fact that male teachers have to consider this at all traces back to the entrenched stereotypes that underpin teaching’s gender imbalance. Given that low pay—and accompanying low social standing—is both a result of and driving force behind men’s underrepresentation in the profession, it stands to reason that salary hikes could help stem the imbalance. A pay bump could in theory spur a virtuous cycle in which greater representation of men in the profession could slowly shift perception, which Ingersoll in 2016 suggested to The New York Times could then beget even greater representation.

That said, some research suggests that pay hikes will only go so far in boosting the share of male teachers—attitudes about caregiving will need to change, too. “Two years ago, if someone had told me that the most important role you can play as a teacher is to be a caregiver, I probably would’ve said, ‘Well, that’s not what I’m signing up for,’ ” González acknowledged.

Today he—echoing Jean-Pierre—embraces the fact that caregiving is, indeed, integral to his responsibility as a teacher, and that it’s just as valuable as all the other parts of his job.