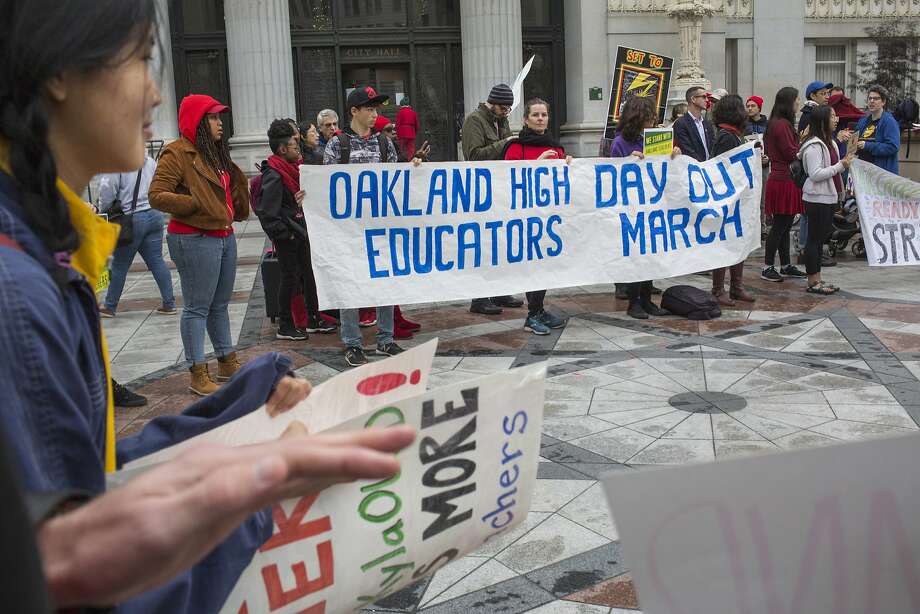 Teachers in Oakland, California went on strike on Thursday and continue a wave of activism that started last year when educators across West Virginia were out of the classroom for nine days. The movement spread to five more states before the school year was over.  As reported by NPR:

“New data from the Bureau of Labor Statistics shows that almost a half a million U.S. workers were off the job in strikes or lockouts during 2018, and nearly 400,000 of them were teachers. It was the biggest year for work stoppages since 1986.

This year, individual districts — such as Denver and Los Angeles — have picked up where states left off. Teachers in Oakland, Calif., were on the picket lines Thursday and Friday, and Sacramento, Calif., teachers could be next.

Educators say they’re angry. They don’t like how states and school districts treat them and their students. A lot of the frustration comes down to money, but dignity and respect are touchstones, too.

Why are teachers striking?

Teachers earn less than other workers with comparable experience and education — a gap that’s widened in recent years. More than a million teachers aren’t covered by Social Security. An NPR/Ipsos Poll conducted last April found that 59 percent of teachers have worked a second job, and 86 percent say they’ve spent their own money on classroom supplies.

In most states where teachers walked out of their classrooms last year — like Oklahoma, Arizona and Colorado — teachers make even less than other educators across the country, especially after their pay is adjusted for cost of living.

Many of these educators were pressing for better pay and more funding for schools. Some got what they wanted — at least, they were promised it.

Then, a major Supreme Court decision last year dealt a blow to teachers unions. In Janus v. AFSCME, the court ruled that public sector unions can no longer collect money from nonmembers covered by collective bargaining agreements. That decision could potentially weaken teacher unions by cutting them off from money.

Many scholars predicted after the Janus decision that there would be more militant organizing, including more strikes. That’s because unions may feel forced to prove their value to potential members, as the strength of bargaining agreements — which tend to include costly strike penalties — erodes along with union power.

Compared with states, districts have been left in a tough spot when responding to teacher demands. During the strike in Los Angeles, for example, district leaders blamed the state for their funding woes. Funding to school districts comes from shifting, complicated combinations of local, state and federal sources, and in California, funding per student is well below the national average.

When the strike ended in Denver, Superintendent Susana Cordova said, “We’re in the shape we’re in because of the lack of will and the lack of collaboration at the state level to invest in our schools,” as Colorado Public Radio reported.

Charter schools are part of the story, too

Meanwhile, public school teachers have long argued that charters siphon public funds and fail to serve all students. In Oakland and Los Angeles, teachers are asking for more restrictions on these schools.

West Virginia educators walked off the job again for two days this week to protest a bill making its way through the statehouse that could have introduced charter schools to the state. Lawmakers effectively killed the bill on Tuesday, and union leaders called the strike off on Wednesday evening after the time for lawmakers to reconsider the measure had passed.

How are teachers organizing?

A lot of the walkouts last year happened in right-to-work states, where unions are smaller and weaker. Grassroots groups teamed up with unions to plan strikes and walkouts.

Districtwide strikes this year have been led by local unions, like United Teachers Los Angeles, the Denver Classroom Teachers Association and the Oakland Education Association.

Unions and grassroots groups have both relied on social media to coordinate. The slogan #RedforEd became widespread last year and has picked up again in Denver, Los Angeles and Oakland.

Putting the strikes in political context

Is this movement a partisan one? Largely, if not entirely.

Picketing teachers have often, though not always, faced off against Republican lawmakers. In Colorado and Arizona, for example, Republican lawmakers introduced bills that were seen as direct retaliation against strikers: to jail teachers for walking off the job or punish them for discussing politics in the classroom.

When teachers in Kentucky walked out of their classrooms last spring, Gov. Matt Bevin, a Republican, told reporters, “I guarantee you somewhere in Kentucky today, a child was sexually assaulted that was left at home because there was nobody there to watch them.” He later apologized.

Republican Mary Fallin, then governor of Oklahoma, told CBS News last year that teachers on strike were “kind of like having a teenage kid that wants a better car.”

Meanwhile, conservatives heralded the Janus decision as a victory for the “individual rights of teachers” as well as the “lessened ability for unions to block education reform generally,” as Lindsey Burke of the conservative Heritage Foundation told NPR last spring.

Some scholars say striking teachers fit the profile of a broader movement within the Democratic Party.

Dozens of teachers ran for state office during midterm elections, mostly on Democratic tickets, according to an analysis by Education Week. Jahana Hayes, the 2016 National Teacher of the Year, became the first black Democrat elected to Congress from Connecticut, on a child-centered, progressive platform.

Democratic presidential candidates, notably, are throwing their support behind striking teachers. Sen. Kamala Harris, D-Calif., tweeted in January that she was standing in solidarity with the striking Los Angeles teachers.”