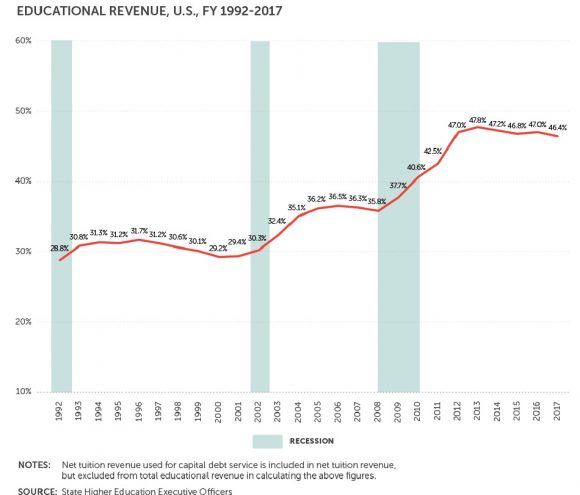 For first time, more than half of the states now rely more heavily on students to finance public higher education. During the 2017 fiscal year, the State Higher Education Executive Officers Association reports, 28 states leaned mostly on students, not on taxpayers.   A new milestone has been reached in the decades-long trend of state disinvestment in higher education, according to the Association’s study. Tuition dollars, not state and local funding, have become the primary revenue source for public higher education in most states.  As reported by The Chronicle of Higher Education:

“Tuition dollars, which amounted to $72.3 billion nationwide, accounted for 46.4 percent of overall revenue for public higher education, according to the association’s report.

Vermont’s system of public universities and colleges relied the most on tuition revenue, with 86.6 percent of its funds coming from students. At the opposite end of the spectrum, tuition money accounted for only 14.7 percent of the revenue at Wyoming’s public institutions.

While the trends reflected in the report are by no means new, they are stark. In 2000 tuition dollars paid by students accounted for more than half of revenue in just three states.

The trend also reflects that other state services such as Medicaid and K-12 education are accounting for greater portions of the state funding.