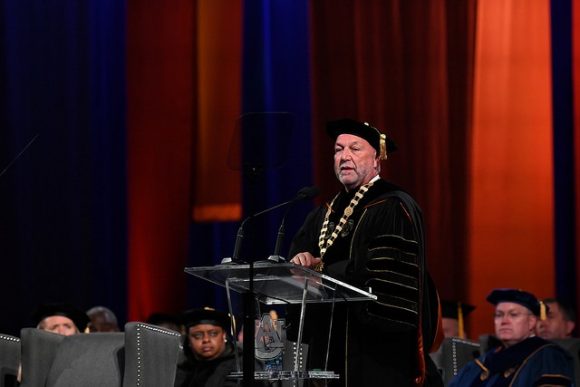 During his installation ceremony yesterday, Steven Leath, the new President of Auburn University, announced a $100 million initiative to hire 500 tenure-track faculty members by 2022.

“Our vision for Auburn is to become a world-class academic, research and service
university in the true spirit of our land-grant heritage,” said Leath. “The strategy and initiatives launched today are designed to position Auburn as an undisputed go-to destination for that special caliber of student, faculty, staff and development partner driven to make a meaningful impact on the state of Alabama, the nation and the world.”

As reported by The Chronicle of Higher Education:

“While the number of hires will draw attention, the actual number of faculty members employed at Auburn will grow by about 100 once attrition and retirements are factored in,…University officials expect the 1,144-member faculty to reach 1,250 by 2022. Some of the new hires will take open positions; others will fill new positions.

“I feel we need to grow our research and scholarship to be a well-rounded land grant institution, but I don’t want to take our faculty out of the classroom,” Leath said. “So the solution is more faculty.”

Most of the new hires will be in the STEM fields, including agriculture and veterinary medicine, but there will also be additions in the arts and humanities. The university will focus on subjects that have proved popular, like kinesiology, a relatively new major at Auburn.

Beth Guertal, an agriculture professor, and Bruce Tatarchuk, an engineering professor, lead a group that will decide where to bring in the new professors.

The hiring spree will cost the university well over $100 million, including the costs of faculty salaries and the creation of laboratories, Leath said. Auburn recently finished its largest fund-raising campaign and expects an increase in its state appropriation this year. Alabama’s legislature is still in session, but if the state’s education budget passes, it will include an increase of $42 million for public universities.

Leath said he was aware that rapid growth can cause tensions on campuses, but he hoped that by asking professors to lead the group making the decisions, the plan would earn faculty members’ trust.”