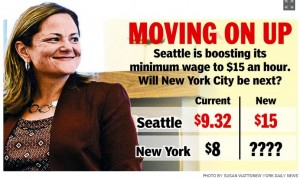 The Seattle City Council voted earlier this week to put low-wage workers on a path over the next several years to earning a $15-per-hour minimum wage. This historic measure came after a five-month process that brought together business and civic leaders, unions and nonprofits in tough negotiations. But the real fuel for Seattle’s action came from a growing unease across the United States with income inequality. Other cities and states are looking at Seattle and thinking they need to something also.

Here in New York, City Council Speaker, Melissa Mark-Viverito (D-Manhattan) said Tuesday that she is ready to convene hearings on the matter and would like to see the minimum wage bumped to $15 an hour in the city, nearly double the current statewide minimum of $8.

As reported in the New York Daily News, Mayor Bill de Blasio is supportive of this effort:

“De Blasio’s call for raising the minimum wage in the city is part of his “progressive” agenda to attack income inequality.  James Parrott of the Fiscal Policy Institute said New York is lagging behind other states in implementing a higher minimum wage, which he said could help stimulate the local economy. “Workers will stay on the job longer if they are better compensated,” he said. “They’re going to spend more in local stores.”

However, opponents say businesses would suffer.”

Increasing the minimum wage is long overdue.  Let”s do it New York!