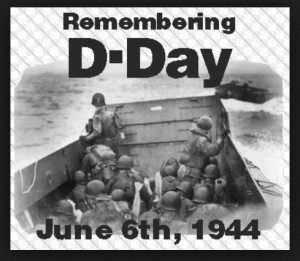 During World War II (1939-1945), the Battle of Normandy, which lasted from June 1944 to August 1944, resulted in the Allied liberation of Western Europe from Nazi Germany’s control. Codenamed Operation Overlord, the battle began on June 6, 1944, also known as D-Day, when some 156,000 American, British and Canadian forces landed on five beaches along a 50-mile stretch of the heavily fortified coast of France’s Normandy region. The invasion was one of the largest amphibious military assaults in history and required extensive planning. Prior to D-Day, the Allies conducted a large-scale deception campaign designed to mislead the Germans about the intended invasion target. By late August 1944, all of northern France had been liberated, and by the following spring the Allies had defeated the Germans. The Normandy landings have been called the beginning of the end of war in Europe.

Commemorations of the 70th annniversary of D-Day are taking place all over Europe. The American stars-and-stripes will be raised at the American cemetery overlooking Omaha Beach.  A full day of ceremonies  are planned across Normandy in honor of the troops, mainly US, British and Canadian, who risked or gave their lives in the liberation of German-occupied western Europe during World War II.

The History Channel has an excellent website devoted to D-Day with video, images, and other resources.