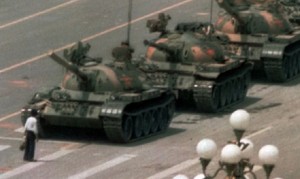 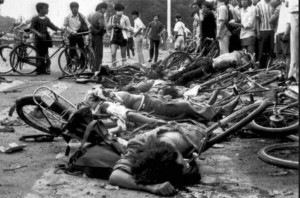 Today June 4th is the 25th Anniversary of the Tiananmen Square Massacre when the Chinese government killed hundreds maybe thousands of students. After initially tolerating the student-led demonstrations in the spring of 1989, the Communist Party sent in troops to crush the display of public defiance. The government has never released a death toll from the violence, but estimates from human rights groups and witnesses range from several hundred to several thousand.

To many Chinese, the Tiananmen Square Massacre is a distant memory. The New York Times has an op-ed piece by Helen Gao, a young journalist in Beijing who comments:

“To my generation, people born in the late 1980s and 1990s, the widespread patriotic liberalism that bonded the students in the early 1980s at the start of the economic reform period feels as distant as the political fanaticism that defined the preceding decades. Chinese leaders, having learned their lesson during the Tiananmen protests, have kept politics out of our lives, while channeling our energies to other, state-sanctioned pursuits, primarily economic advancement.”

The Huffington Post has an article quoting the mother of one of the victims:

“Twenty-five years ago, Wang Nan took his camera and headed out to Beijing’s Tiananmen Square, where tens of thousands of people had gathered calling for democratic reforms. The 19-year-old told a friend he wanted to record history. Before he left his home late on June 3, 1989, he asked his mother “Do you think the troops would open fire?” She said she did not. Around three hours later, he was shot dead by soldiers.

As his 77-year-old mother, Zhang Xianling, prepares to mark the 25th anniversary of her son’s death, she is under around-the-clock surveillance by eight police and security officers.  Zhang said the level of scrutiny this year was unprecedented. As early as April, police officers barred foreign journalists, including Reuters reporters, from visiting her home.

“I find it ridiculous, I’m an old lady,” Zhang told Reuters by telephone. “What can I say (to reporters)? I don’t know any state secrets. All I can talk about is the matter concerning my son. What is there to be afraid of?”