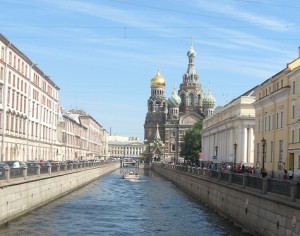 Yesterday we spent another day touring St. Petersburg with our guide Maria.  We had lots of quick visits to places like the State University of St. Petersburg, the Academy of Arts, and several cathedrals, all of which had been closed or used for other purposes during the Communist/Soviet era.  In addition to skating rinks and swimming pools which I mentioned in an earlier post, cathedrals were converted into warehouses, libraries, produce storage facilities, and in one case a morgue during and immediately after World War II.

The highlight of the tour was a visit  to the island fortress of Sts. Peter and Paul which was built by Peter I (the Great) on the Neve River.  It houses a number of buildings and facilities including a prison used to house mostly political prisoners.  Today it is a cultural center dedicated to preserving the history of its period and its founder.  The St. Peter and Paul Cathedral on the island is impressive with dozens of mosaic religious icons.  Incredibly delicate artwork!   Its significance is that it is the burial place for all of the Romanov emperors and empresses from Peter I through Nicholas II- the last Romanov emperor who abdicated during the Russian Revolution.

For the last half-hour or so of our tour, we walked with Maria along a canal talking about all we had seen during the past two days also with the knowledge that we would not likely see each other again.

In the evening, we attended a show of folk dancers, singers, and a band playing Russian instruments.  Lots of color, sound, and motion.   And well-done!

Lastly, St. Petersburg is also entering the period that Russians call “white nights’ when it is light the entire day.  Elaine and I had a nightcap listening to a Spanish guitarist playing ballads.  As it approached midnight, it was still light outside.

Tomorrow we leave for Tallin, Estonia, and start our journey west back to London. 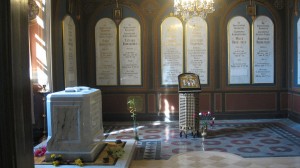 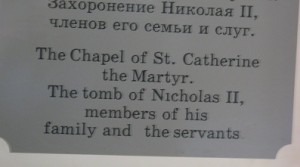 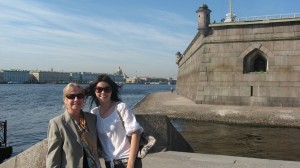