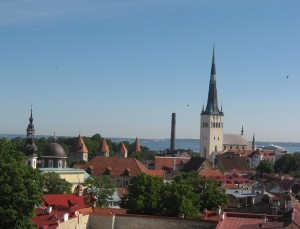 Yesterday we spent the day in Tallinn, the capital of Estonia, a country of 1.2 million people.  Tallinn is on the Baltic Sea, in the north part of the northern most of the Baltic countries (Lithuania and Latvia being the other two).    Estonia is a small country made up of Estonians and Russians.  It was under the sphere of the Soviet Union for much of the 20th century.   Tallinn is mostly a modern city filled with several high-rise buildings, parks, museums, hotels and cafes.

The most intersting aspect of Tallinn is its “olde” town established in the 12th century which is only a short walk from the center city.  Besides churches, you can see a guild house established in 1410 and an apothecary established in 1425. In fact, most of the “olde”  town has remained remarkably unchanged for the past 600 years.  I have been to several recreations of towns and villages in the United States such as Willamsburg, Virginia and Sturbridge, Massachusetts but this something much more genuine mainly because the buildings are from the historical period.

We had lunch at the Olde Hansa, a medieval restaurant that serves wild boar, elk, bear, and assorted other meats, fowl, and fish.   All the waiters and waitresses (as well as many store owners) are dressed in folk costumes.  Wine and beer are served in hand-blown glasses and tankards.    With our grilled salmon and wild boar sausages served in clay dishes, we had pecans and barley, lentils, turnips, and sauerkraut.

We finished our day  at a concert by a string quartet in one of Tallinn’s “olde town” churches with incredible acoustics.   Well-done!

As Elaine said as we headed back to our ship:  “What a charming place”. 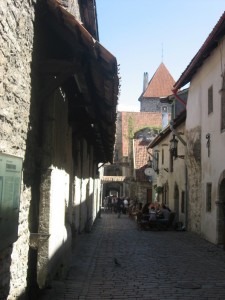 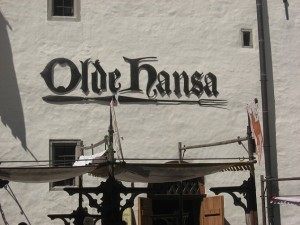 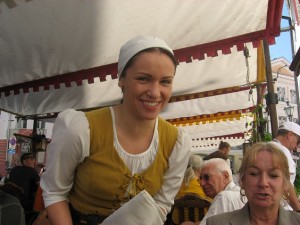 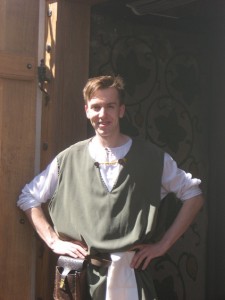