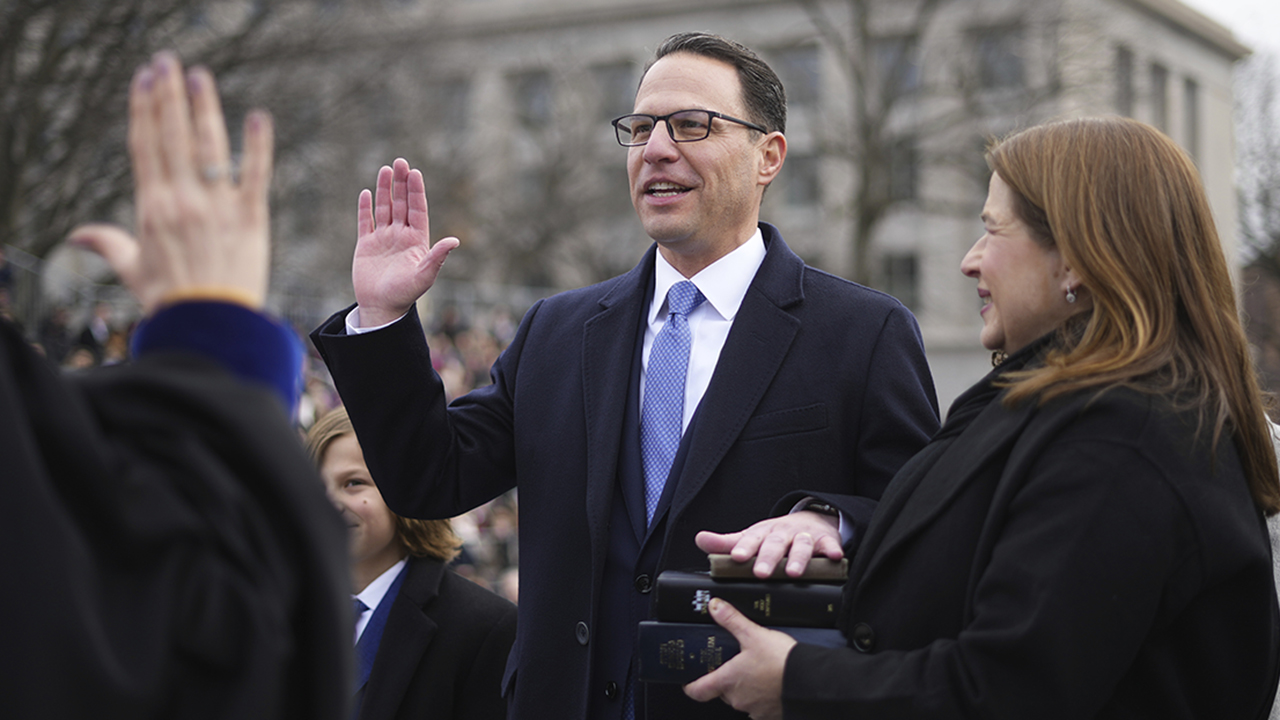 Democrat Josh Shapiro took the oath of office yesterday to become the 48th governor of Pennsylvania, placing his hand on a stack of three Jewish Bibles at the inaugural ceremony outside the state Capitol to cap his blowout win in November’s election.

Shapiro, 49, takes over in the nation’s fifth-most populous state with extensive experience in state government, including six years as Pennsylvania’s elected attorney general.

He took the oath from Chief Justice Debra Todd on a stage erected behind the state’s Capitol in Harrisburg, with lawmakers, ex-governors, members of Congress and several thousand others looking on.  As reported by the Associated Press.

“I am humbled to stand before you today as Pennsylvania’s 48th governor,” Shapiro said at the start of his remarks from the podium. “Along the winding road that has led to this moment, I have been grounded in my faith and family.”

Shapiro succeeds term-limited Democratic Gov. Tom Wolf, and is the first governor of Pennsylvania since 1966 to be elected to succeed a member of his own party.

On stage with Shapiro were just over a dozen people he invited — including survivors of child sexual abuse, parents of children killed by gun violence and the widows of two state troopers killed in the line of duty — who aides say symbolize his accomplishments as attorney general and his bipartisan policy aims as governor.

In his speech, Shapiro did not spell out specific policy aims, but he emphasized themes that he has developed before and after the election: that voters are embracing democracy, rejecting extremism and asking their leaders to protect their rights and make progress on important quality-of-life issues.

“Now is the time to join together behind the unifying strength of three simple truths that have sustained our nation over the past two-and-a-half centuries: that above all else, beyond any momentary political differences, we value our freedom, we cherish our democracy, and we love this country,” Shapiro wrote in prepared remarks.

The Capitol filled up in the hours before the inaugural ceremony, with Shapiro’s friends and supporters, political elite and many who will work in the new administration there to mingle, get credentials and pack into the Senate chamber to witness the swearing-in of Democrat Austin Davis to become Pennsylvania’s first Black lieutenant governor.

He’ll take the reins of a sprawling state government — it employs roughly 80,000 employees and handles more than $100 billion a year in state and federal money — that has billions in reserve and a stronger-than-usual economy for the slow-growing state.

But he also is moving across the street from the attorney general’s office to the executive suite in the Capitol at a time when the House of Representatives is paralyzed by a partisan fight for control and Republican lawmakers are aiming to take away some executive branch leeway to enact regulations.

Shapiro himself has preached bipartisanship, emphasizing his support from independents and Republicans in the election when he rolled up a powerhouse 15 percentage-point victory over the far-right Republican nominee, state Sen. Doug Mastriano.

Shapiro benefited from a Democratic electorate inflamed by the attack on the U.S. Capitol on Jan. 6, 2021, and the Supreme Court’s overturning of the landmark abortion rights case Roe v. Wade.

In Shapiro, they saw someone who would protect abortion rights with his veto pen and ensure the 2024 presidential election — when Pennsylvania again is expected to be a premier battleground — will be free and fair, and not overturned if the Republican loses.

Still, every new law under Shapiro must have a GOP stamp of approval, considering the six-seat Republican majority in the state Senate.

To that end, Shapiro has tried to avoid radioactive political issues, staked out the middle on various issues and hired several Republicans for his Cabinet.

Shapiro will sign ethics orders for his administration later this week, aides say, and will deliver his first speech to a joint session of the Legislature when he presents his first budget plan March 7.

Shapiro also resigned Tuesday as attorney general, leaving in control his top deputy of six years, Michelle Henry, a career prosecutor who Shapiro plans to nominate to fill the last two years of his term.

Shapiro, a devout Jew, chose a stack of three copies of the Hebrew Bible on which to take his oath.

One is a family Bible; the second is from the Tree of Life Synagogue in Pittsburgh where a gunman in 2018 killed 11 worshippers in the deadliest antisemitic attack in U.S. history; and the third was an Army-issued tome carried by Herman Hershman of Philadelphia on D-Day in 1944.

Members of several faiths delivered an invocation at the event, where the capacity was about 4,400.