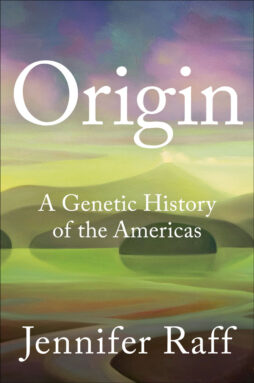 I have just finished reading  Origin:  A Genetic History of the Americas by Jennifer Raff, associate professor of anthropology at the University of Kansas.  The main focus of this book is the “origin” of the first people to arrive in the Americas.  While the most accepted story is that these people arrived via the Bering Sea (or possibly a land or ice bridge) about 18,000 or 20,000 years ago, there is not universal acceptance of this theory among anthropologists especially regarding the timeline.  Some have it later and others have it much earlier.  Raff does a good job of taking the reader through the possibilities focusing on the science and especially the genetics.  She sometimes gets into the weeds of the evidence but it is worth the effort of reading through her explanations.

I found Origin informative and came away with a much better understanding of the genetic science behind the  anthropological beginnings of the Americas. If you are at all interested in this subject, it is worth a read!

Below is a review that appeared in ScienceNews.

‘Origin’ explores the controversial science of the first Americans

Scientific understanding of the peopling of the Americas is as unsettled as the Western Hemisphere once was. Skeletal remains, cultural artifacts such as stone tools and, increasingly, microscopic pieces of ancient DNA have sparked heated debates about which of several origin stories best explains available evidence. Additional conflict stems from a tragic scientific legacy of ignoring and exploiting Indigenous groups whose ancestries are on the line.

Anthropologist and geneticist Jennifer Raff offers her take on the state of this fascinating and turbulent research field in Origin: A Genetic History of the Americas.

Raff wants to tell the most accurate, if still incomplete, story of how humans settled the Americas by integrating research on ancient and modern DNA with archaeological finds. She refers to people who inhabited the Western Hemisphere before Europeans arrived as First Peoples, a term favored by some of her Indigenous colleagues.

Most researchers think that ancestors of the First Peoples lived in Siberia and East Asia 20,000 years ago or more during the Ice Age, Raff explains. A consensus view holds that those groups eventually crossed a now-submerged expanse of land — the Bering Land Bridge — that connected northeastern Asia and North America. Analyses of ancient human DNA indicate that these migrants gave rise to populations that lived south of an ice sheet that ran across northern North America from around 80,000 to 11,000 years ago. But much remains unexplained.

Raff delves into several competing models of how, when and where people first made inroads into the Americas. One approach holds that Ice Age Siberians, known from archaeological finds, reached North America between 16,000 and 14,000 years ago and, within a few millennia, journeyed south across the continent through a gap in the melting ice sheet. Those settlers probably founded the Clovis culture, known for its distinctive stone points (SN: 1/15/22, p. 22).

But archaeological and genetic evidence best fits a third model, Raff writes. In this scenario, First Peoples reached the Americas as early as 18,000 years ago and perhaps over 20,000 years ago. These folks — including groups that were not predecessors of Clovis people — probably traveled by boat or canoe along North America’s west coast, arriving in South America no later than about 14,000 years ago (SN: 12/26/15, p. 10).

Raff articulates scientific arguments for these settlement scenarios in clear, nontechnical language. But her narrative revs up when she describes how geneticists, with some admirable exceptions, have treated Indigenous groups as afterthoughts or as passive DNA donors.

One example concerns a roughly 9,000-year-old skeleton found in Washington state in 1996, dubbed Kennewick Man or the Ancient One. That find sparked a legal battle between scientists who wanted to study the man’s remains and local tribes intent on reburying their ancestor. The scientists won. Years later, geneticists who consulted with one tribe in the dispute worked out an agreement to sample the tribe’s DNA for comparison with the Ancient One — and demonstrated an ancestral connection — before his bones were interred by the tribe (SN: 7/25/15, p. 6).

Many Native American groups, especially in North America, nurse bad memories of genetic researchers who misled them about study goals or never met with them to discuss DNA results at odds with tribal oral histories, Raff writes. As a result, Indigenous communities today often refuse to participate in genetic studies. Only a commitment by researchers to collaborate with those groups will resolve this standoff, she argues, as belatedly happened with the Ancient One.

Raff also provides a glimpse of how she came to study ancient DNA. A lifelong love of exploring caves, starting as a child in a caving club, imbued Raff with a respect for extensive preparation and intense focus in the moment. Those traits proved essential for conducting the many exacting lab procedures she outlines for coaxing DNA out of bone samples.

After mentioning that a few large, well-funded labs dominate ancient DNA research, Raff leaves unexplored the implications of that concentration of resources for studying ancient human migrations. But her book gives a balanced view of what’s known about the First Peoples and how scientists can cooperate with their modern-day descendants.