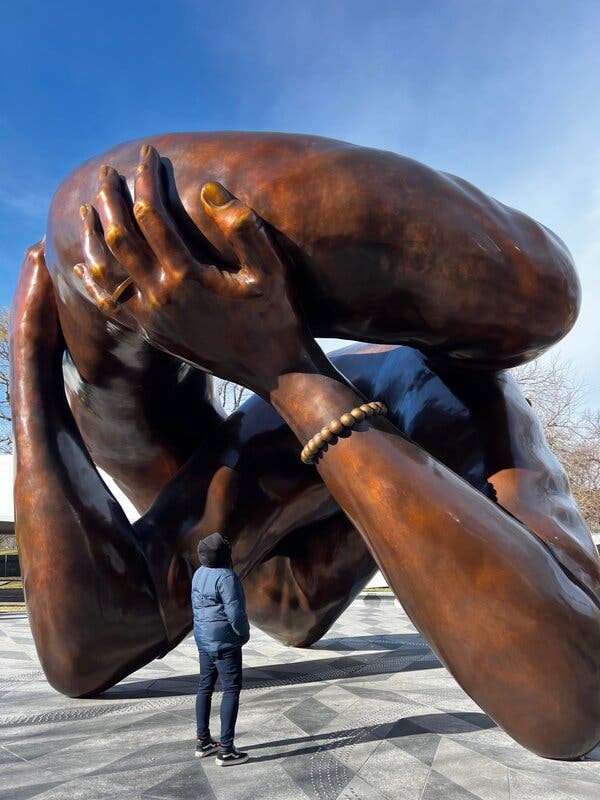 “The Embrace”  is a bronze sculpture, by the artist Hank Willis Thomas, that symbolizes the hug Dr. King and Coretta Scott King shared after Dr. King won the 1964 Nobel Peace Prize.  Credit…Skanska

In 1965, the Rev. Dr. Martin Luther King Jr. led a rally from Roxbury, a predominantly Black neighborhood in Boston, to the Boston Common. With the crowd of 20,000 singing and chanting freedom songs, that rally marked one of the first civil rights marches in the Northeast. On Friday, more than 50 years later, a 20-foot-tall monument was unveiled at the country’s oldest public park honoring Dr. King and Coretta Scott King’s legacy. Titled “The Embrace,” the sculpture symbolizes the hug the couple shared after Dr. King won the Nobel Peace Prize in 1964.  As reported by The New York Times.

The artist Hank Willis Thomas, who was chosen in 2019 along with MASS Design Group out of 126 submissions, said that with so many monuments dedicated to war, he crafted a sculpture that spreads a message of love and reiterates the Kings’ message of nonviolence and solidarity.

“You never wake up and think you’d be able to contribute meaningfully to the legacy of Dr. Martin Luther King and Coretta Scott King,” Thomas said. “And that alone, the fact that I was able to be a part of that, is just humbling and dumbfounding.”

Although Thomas, 46, was not alive during Dr. King’s lifetime, he said he lived to see Mrs. King’s trailblazing efforts to establish Martin Luther King Day as a national holiday. With the release of Stevie Wonder’s “Happy Birthday,” celebrating Dr. King, and a petition with six million signees delivered by Mrs. King and Wonder to the U.S. Senate, the two were able to raise awareness in support of a national holiday. In the years to come, Mrs. King continued to push for national recognition. 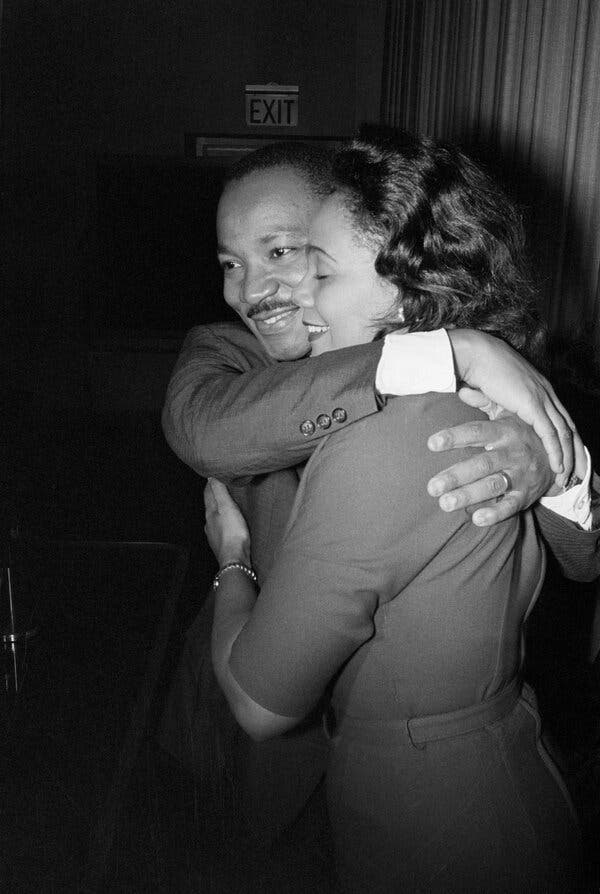 Dr. King hugs his wife, Coretta, during a news conference following the announcement that he had been awarded the Nobel Peace Prize in 1964.Credit…Bettmann Archive/Getty Images

“In that photograph of them in 1964, his arms are wrapped around her but also his weight is on her,” Thomas said. “To see her so gracefully and lovingly carrying that weight, it was a metaphor for what she was able to do throughout a huge portion of my life.”

The 19-ton bronze artwork was made up of about 609 pieces welded together in Washington by the Walla Walla Foundry and transported to Boston. “The Embrace,” now a permanent fixture in Boston Common, sits on the 1965 Freedom Plaza, which honors 69 local civil rights leaders from the 1950s to the 1970s.