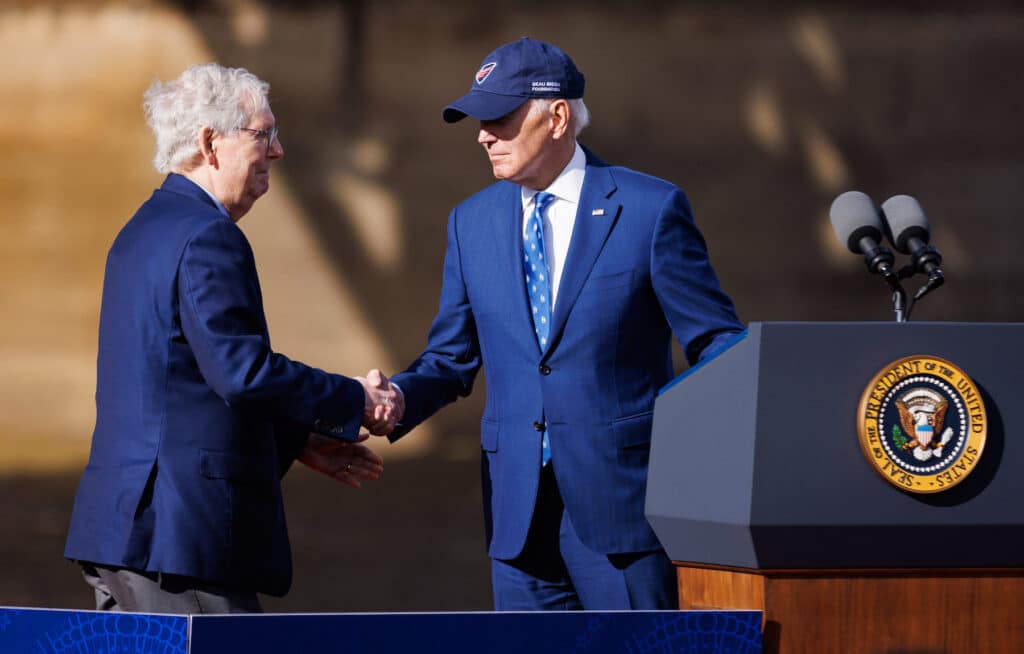 President Joe Biden celebrated new infrastructure funding at an event yesterday with Senate Minority Leader Mitch McConnell (R-Ky.), in a rare display of bipartisanship that stood in stark contrast to the fiasco that has dominated recent headlines in the selection of a speaker in the US Congress.  The president heaped praise on the Kentucky GOP senator for helping make a historic infrastructure overhaul a reality.  As reported by The Huffington Post.

That McConnell decided to ride along with Biden to the event in Covington, Kentucky, in the presidential limo, put a punctuation mark on the message of normalcy the two leaders were hoping to send as House Republicans struggled to elect a speaker. The chaos has derailed the ambitions of Rep. Kevin McCarthy (R-Calif.) and the formation of the 118th Congress.

The conservative revolt against McCarthy, who has been the GOP House leader, is historic: The lower chamber hasn’t needed more than one ballot to elect a speaker since December 1923. Though, in 1855, the process took 133 ballots and two months to sort out.

Prior to leaving for Kentucky on Wednesday, Biden weighed in by calling the GOP’s predicament “a little embarrassing.”

“How do you think this looks to the rest of the world?” the president asked as he left the White House.

In Kentucky, Biden touted new federal funding that includes an overhaul and expansion of the Brent Spence Bridge, a major freight bottleneck that connects Cincinnati, Ohio, and Covington, Kentucky. The $1.6 billion in funding was made available through the passage of the Infrastructure Investment and Jobs Act, the trillion-dollar law that wouldn’t be possible without McConnell and other Senate Republicans who supported it.

“We don’t agree on everything. In fact, we disagree on a lot of things, but here’s what matters: He’s a man of his word,” he added of the senator. “He’s willing to find common ground to get things done for the country.”

McConnell wasn’t the only Republican in attendance on Wednesday. Ohio Gov. Mike DeWine (R) and recently retired Sen. Rob Portman (R-Ohio), who voted for the infrastructure law, were also present.

“Multiple presidents have promised a companion bridge [to the Brent Spence], and this president delivered,” Beshear said of efforts to expand the bridge.

Wednesday’s ride with McConnell is a bit of vindication for Biden, who predicted as a presidential candidate that congressional Republicans would have an “epiphany” and work with Democrats once Donald Trump was no longer president. In addition to the infrastructure law, Congress approved several bipartisan measures in the past two years, including a gun safety overhaul, domestic semiconductor investments, and new health care for veterans.

Biden and McConnell share a long history in the Senate and as negotiators during President Barack Obama’s presidency. As vice president, Biden regularly cut deals with McConnell ― to the annoyance of some Democrats ― under a divided government similar to what the country is facing today.

Biden used the Brent Spence Bridge and the infrastructure victory as an example of what can be accomplished when lawmakers work together.

“After years of politics being so divisive, there are bright spots across the country. The Brent Spence Bridge is one of them,” Biden said Wednesday. “A bridge to the vision of America I know we all believe in, where we can work together to get things done.”

Amen!  The American people yearn for what Biden and McConnell represented yesterday!