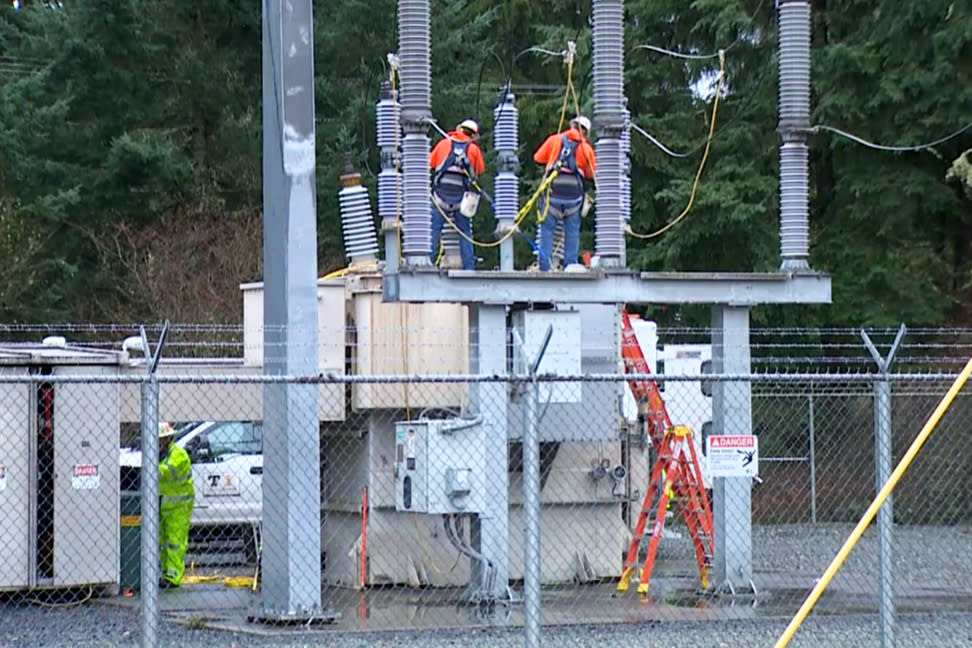 Crews work to restore power at an electricity substation in Pierce County, Washington, on Monday. (KING)

The Pierce County Sheriff’s Department described the early morning attacks on two Tacoma Public Utilities substations and a Puget Sound Energy facility as acts of vandalism, with those responsible unidentified.

“It is unknown if there are any motives or if this was a coordinated attack on the power systems,” the sheriff’s department said in a statement.

The agency estimated that the number of affected homes and businesses was 14,000 at one point Sunday, when three substations were affected.

The sheriff’s department described a fourth incident Sunday about 7:21 p.m. at another Puget Sound Energy substation.  As reported by NBC News.

“The suspect(s) gained access to the fenced area and vandalized the equipment which caused the fire,” the sheriff’s office said in a statement. “There are no suspects in custody at this time.”

“All law enforcement agencies in the county have been notified of the incidents and will be monitoring power substations in their area,” the statement said.

Power was restored to most of the affected homes, the sheriff’s department said.

Puget Sound Energy confirmed in a statement Monday that two of its substations were attacked.

“We are coordinating with authorities on suspected acts of vandalism at two of our substations. Both incidents are under investigation and no further details are available. PSE has extensive measures to monitor, protect and minimize the risk to our equipment and infrastructure,” the statement said.

Puget Sound Energy said on its website Sunday that more than 1,200 customers were without power — with the vast majority having been reconnected — but it wasn’t clear whether that was connected to the attack.

Tacoma Public Utilities said that more than 7,000 of its customers in the communities of Graham and Elk Plain were without power Sunday and that it continued to work on restoration.

It appears that electricity for many of those TPU customers has been restored — the national blackout tracker PowerOutage.us reported late Sunday afternoon that fewer than 5,000 customers remained in the dark across the state.

In a statement, TPU said, “Two of our substations were deliberately targeted by physical attacks.”

The sheriff’s department said a person or people broke into facilities and vandalized equipment in each of those attacks, the first of which was reported at 2:39 a.m.

TPU said federal law enforcement alerted it this month to the possibility of attacks and recommended a security assessment. It wouldn’t say what measures, if any, it took.

At the same time, Oregon Public Broadcasting and KUOW public radio of Seattle reported that separate attacks on six substations operated by Portland General Electric, the Bonneville Power Administration, the Cowlitz County Public Utility District and Puget Sound Energy in Washington and Oregon had taken place mid-November. The incidents are alleged to have included breaches of utility properties, the outlets said.

On Dec. 3, vandals attacked two Duke Energy substations in Moore County, North Carolina, leaving 45,000 customers in the dark for more than three days, officials said. People with guns opened fire and, in one case, breached a facility, they said, and they remained outstanding nearly a month later.

As electricity was restored to the last of the North Carolina customers Dec. 7, someone opened fire near a Duke Energy hydro facility in Ridgeway, South Carolina, about 130 miles south of Moore County. Federal investigators were comparing ballistics evidence in both attacks to determine whether they were connected.

Investigators probing the North Carolina attacks were looking at online conspiracy theories to determine whether any played a role, two senior law enforcement officials briefed on the matter said this month.

A prevailing theory was that the outages were intended to shut down a drag performance, “Downtown Divas,” at Sunrise Theater in Southern Pines, North Carolina. Anti-LGBTQ demonstrators targeted the location in the days leading up to the Saturday night event, which continued in the dark before it ended early.

Power infrastructure has long been on the attack wish list of white supremacists and other right-wing extremists who seek American “destabilization,” Brian Levin, the director of the Center for the Study of Hate and Extremism at California State University, San Bernardino, said in February.

Earlier this year, three men pleaded guilty in Ohio in connection with a plot to disrupt the electricity grid, sow civil unrest and economic uncertainty, and ultimately trigger a race war, federal prosecutors said at the time.

Something else to worry about as we enter 2023!