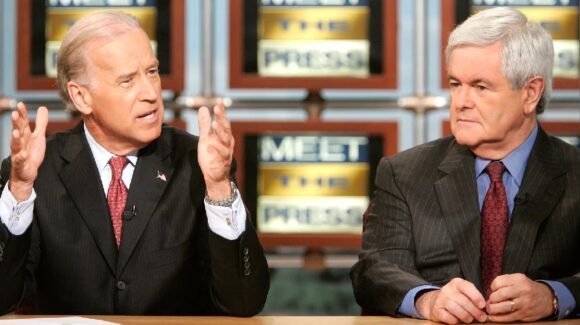 President Biden recently received praise  from one of the figures least likely to offer a favorable assessment of a Democratic administration: former House Speaker Newt Gingrich.

In a column published on his website on Wednesday, Gingrich offers his own party a blunt warning: “Republicans must learn to quit underestimating President Joe Biden.”

It is a remarkable concession for a man who practically invented modern-day partisan combat, which allows for little concession or compromise. Gingrich engineered the impeachment of President Bill Clinton; later, having left Congress amid ethical lapses, he assailed President Barack Obama as a supposed “socialist” in disguise.

Gingrich is no Biden supporter, to be sure, and he takes plenty of jabs at Biden’s allegedly “woke” agenda, meant to usher in what he calls “Big Government Socialism,” a seeming reference to the trillions of dollars the president has devoted, with congressional approval, for coronavirus relief, infrastructure projects and green energy initiatives.

Yet he also believes that GOP attacks on the president have been ineffective, citing Democrats’ surprisingly good showing in last month’s elections as evidence.

“The Biden team had one of the best first term off-year elections in history,” he writes, an assertion bolstered by recent trends in electoral politics. “They were not repudiated. They did not have to pay for their terrible mismanagement of the economy.”

Republican attacks have often focused on Biden’s age and his supposed senility. Some opponents of the current president made similar attacks — albeit much less harshly — during the 2020 primary for the Democratic presidential nomination. They did not work then; Gingrich does not seem to think they are working now.

“We dislike Biden so much, we pettily focus on his speaking difficulties, sometimes strange behavior, clear lapses of memory, and other personal flaws. Our aversion to him and his policies makes us underestimate him and the Democrats,” Gingrich writes.

He even compares the current president to Republican predecessors Dwight D. Eisenhower and Ronald Reagan, both of whom at times benefited from similarly low estimations.

As the legendary journalist Murray Kempton wrote of Eisenhower in Esquire, “He was the great tortoise upon whose back the world sat for eight years. We laughed at him; we talked wistfully about moving; and all the while we never knew the cunning beneath the shell.”

Much like Biden, Reagan was eternally hounded by questions about his age and mental competence. In a 1983 column for the New York Times, former Nixon speechwriter William Safire urged Reagan to retire. “I think President Reagan would better serve the country by passing the torch to somebody ready to make a fresh start on the course he originally set,” Safire offered, sounding very much like the Democrats who now want Biden to step aside.

A little more than a year later, Reagan would prevail in his reelection campaign, with a 49-state victory that remains unrivaled.

Although it is not yet clear if Biden will seek reelection, his success in helping the Democratic Party avert disaster in the midterms will almost surely serve as an argument in favor of his running again. Biden, his family and longtime advisers expect to make a final decision during the holiday season.

Republicans, meanwhile, are struggling to reconcile the return of Donald Trump, who is running for a third time, with a spate of younger candidates eager to challenge him. That eventual candidate will likely confront some of the same challenges that Republicans did in 2022, when many of them waged campaigns based on culture war issues like public safety and transgender rights.

That would be a mistake, Gingrich appears to say, despite having waged plenty of culture wars of his own. “Today there is not nearly enough understanding (or acknowledgement) among leading Republicans that our system and approach failed,” he writes.

For once, Gingrich is correct about something!