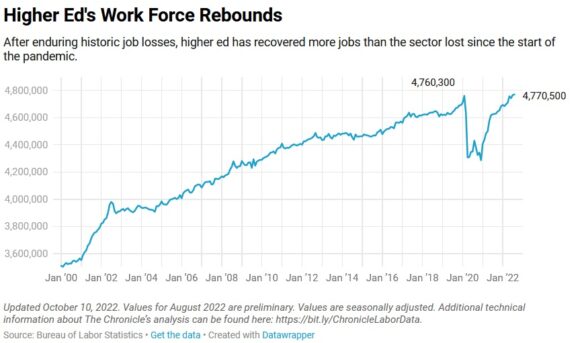 After more than two years of historic job losses, America’s colleges and universities find themselves in a welcome position. Following the addition of an estimated 23,500 employees in July, academe’s work force added another 3,400 jobs in August, which restored it to its pre-pandemic size. All told, an estimated 4.7 million workers (see chart above) are employed by American higher ed today, on par with the labor force’s size during the early days of 2020 — before Covid-19 induced furloughs, retirements, and layoffs.  As reported by The Chronicle of Higher Education.

Job recoveries were strong across both of the sectors of American higher education that the Bureau of Labor Statistics observes. Private institutions employed about 11,000 more workers in August 2022 than they did in February 2020, and public institutions were just short of that pre-pandemic watermark by an estimated 700 jobs.

December 2020 represented the darkest month of the pandemic for higher ed in terms of cumulative job losses, with an estimated 473,000 fewer workers employed when compared to eight months earlier — a reduction of nearly 10 percent. Put another way, one out of every 10 employees on the payroll in February 2020 had disappeared from higher ed’s work force by Christmas of 2020.

The net loss in jobs was so large that it erased more than a decade of job gains within the industry, with higher ed’s work force in December 2020 shrinking to the same size it had been at the close of 2008.

But higher ed’s labor force would see dramatic — if fitful — improvement thereafter, with 330,500 workers cumulatively added to the labor force in the first six months of 2021 — enough to reduce the sector’s total job-loss tab by 70 percent. But it would take another 14 months for the sector to clear the remaining 30-percent, 142,500-job deficit. The job losses would eventually be blamed for diminished services and supply-chain woes on many campuses, as well as widespread burnout among remaining employees.

Prior to the declaration of the Covid-19 pandemic, America’s colleges and universities had never shed so many employees at such an incredible rate, according to estimates spanning 60-plus years and prepared by the U.S. Department of Labor.

Higher ed’s return to pre-pandemic employment levels lagged slightly behind a similar restoration in the wider economy. After adding 528,000 workers in July, the nation’s collective payrolls fully restored the number of jobs lost during the pandemic.

Though estimates of the number of workers employed by colleges and universities are available from the Bureau of Labor Statistics, these data do not include information on other classes of workers, such as those employed by companies that contract with academic institutions to prepare food and clean facilities and who may have lost their jobs because of scaled-back business with academic institutions.

Our colleges and universities welcome this good news!