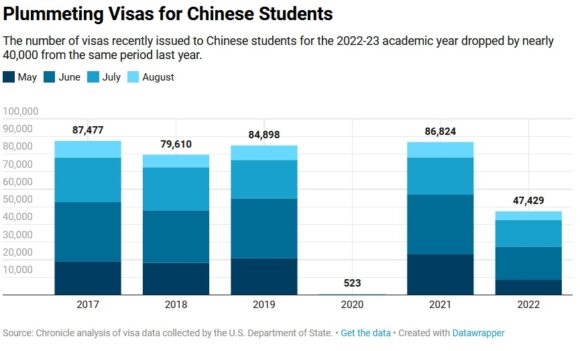 The Chronicle of Higher Education has an article this morning reporting that the number of U.S. visas issued to Chinese students for the new academic year plunged from pre-pandemic levels, an alarming development for American colleges that have come to rely on tuition dollars from a booming Chinese market.

Still, the total number of new student visas awarded for the fall of 2022 was up, thanks to surging demand from India, according to a Chronicle analysis of visa data collected by the U.S. Department of State.

More than 84,000 student, or F-1, visas were issued to Indian students during the critical months of May to August, the period that accounts for the bulk of student-visa issuances. That’s almost 45 percent more visas for Indian students than the same four months last year and a staggering 148 percent more than during that span of 2019.

India far outpaced China in newly issued visas. Only about 47,000 F-1 visas went to Chinese students this summer, 40,000 fewer than were issued from May to August 2021, a 45-percent decline (see graph above).

Despite the precipitous drop in new visas, China remains the largest source of international students on American campuses. About 252,000 Chinese student-visa holders were in the United States in September, according to federal-government data, compared with some 241,000 Indian students.

Most international students are issued a single visa for the duration of their studies. And while elementary- and secondary-school children from abroad also come to the United States on F-1 visas, nine in 10 student-visa holders are college students, so visa data are largely a reflection of college enrollments.

From May through August, the State Department issued nearly new 282,000 F-1 visas at consulates worldwide, a 2-percent increase over the summer of 2021 and 10 percent more than the same period before the Covid-19 pandemic.

The continuing post-Covid rebound among international students over all is a relief for American colleges — no other demographic group experienced as large an enrollment decline during the pandemic.

But the apparent collapse in Chinese-student interest in studying in the United States, whether temporary or permanent, is sure to undercut certainty in future international-enrollment trends.

The drop marks a significant reversal: In the dozen years before the pandemic, enrollments from China soared 450 percent. At their peak, one in three international students on American campuses was from China. One analysis, from the Institute of International Education, estimated that college students from China added $15.9 billion to the American economy during the 2019-20 academic year — and much of it benefited colleges’ bottom lines since most Chinese students pay the full cost of tuition.

But during the pandemic, economic activity generated by the “export” of American educational services to international students fell by almost 28 percent, or nearly $16 billion, according to the U.S. Department of Commerce.

The ability of Chinese students to travel to the United States was severely curtailed by the pandemic, more than that of other international students. The early outbreak of Covid in China led the U.S. government to impose a travel ban on visitors, including student-visa holders, from China in the first months of the pandemic, and it was not lifted until May 2021. As a result, any student coming from China had to first travel to a third country and quarantine. There were few flights between the two countries, and American consulates were closed. During the summer of 2020, only about 500 visas were issued to Chinese students.

Yet there are indications that softening Chinese demand for an American education is not solely driven by the pandemic. For one, Chinese families typically save for years for their children’s education, and many students who go abroad opt out of the national high-school curriculum that prepares them for admission to a Chinese university. As a result, students are locked into their plans to study overseas far in advance. For those students, the pandemic probably disrupted their American education but didn’t derail it altogether — indeed, visa issuances to China last summer rose above pre-pandemic levels, a sign of pent-up demand from students who had deferred admission.

Even before the pandemic, the rapid growth in Chinese enrollments had leveled off, and the number of new international students coming to the United States had been in decline. One big culprit: rising geopolitical tensions between the United States and China. Under the Trump administration, the White House considered a ban on Chinese students, and President Donald J. Trump reportedly called them spies. Public skepticism about enrolling large numbers of Chinese students has also grown. More than half of Americans in a 2021 Pew Research Center survey said they favored restrictions on students from China.

The students may be turning away from the United States to other popular destinations. Chinese applicants to British universities increased by 10 percent over the previous year. And because of the pandemic, some families may want their children to stay closer to home — Hong Kong universities are reporting record enrollments from mainland China.