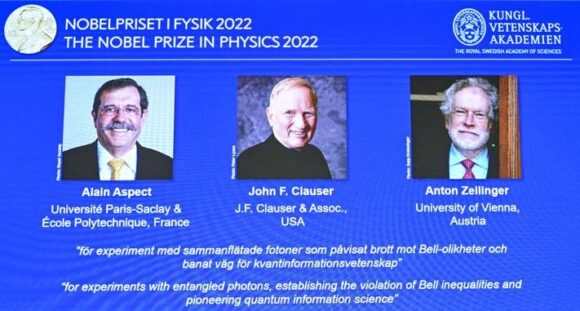 Alain Aspect, John F. Clauser and Anton Zeilinger have won the Nobel Prize for physics for their achievements in quantum information science and the study of the behavior of particles and atoms, the organizing committee announced in Stockholm this morning.

Each winner has conducted experiments using “entangled quantum states,” which sees two particles behave as one and affect each other, even though they are apart.  As reported by CNN.

Aspect, Clauser and Zeilinger were born in France, California and Austria respectively. Their discoveries have added to and furthered the work of John Stewart Bell, whose theorem changed the scientific world’s understand of quantum mechanics.

The work of the trio “has laid the foundation for a new era of quantum technology,” the Royal Swedish Academy of Sciences said.

It confirmed that “quantum mechanics actually has utility in real world applications,” Michael Moloney, CEO of the American Institute of Physics, told CNN

Moloney said the trio’s discoveries are “potentially going to change our world in terms of really practical things, like being able to do quantum computing; solutions that will help us with everything from vaccines, to tech, to weather prediction.”

“There’s just so many different types of computations that we can do through quantum information science that we can’t do with classical computers,” he added.

Tuesday’s winners have been highly regarded within academics for several decades. Analytics company Clarivate said Tuesday it had forecast Clauser, Aspect and Zeilinger would win a Nobel Prize in 2011, “based on a series of highly cited and independently published papers that appeared in the 1960s, 1980s, and 1990s, respectively.”

“Our selection also recognized the obvious importance of their experimental verification of ‘spooky action at a distance,’ a phenomenon of quantum mechanics that strains our imagination,” the company said.

The three scientists will share the prize money of 10 million Swedish krona ($915,000).

Congratulations to these winners!