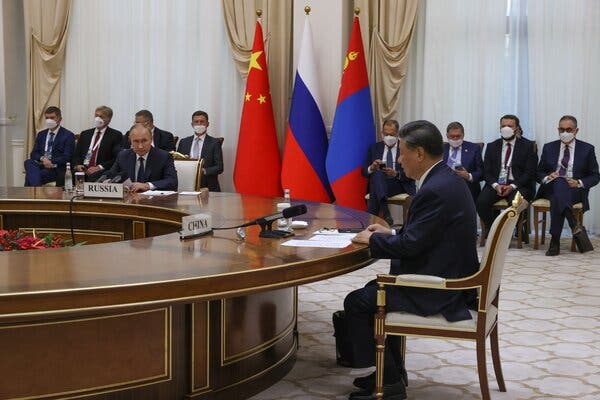 President Vladimir V. Putin acknowledged yesterday that China had “questions and concerns” about Russia’s war in Ukraine, a notable, if cryptic, admission that Moscow lacks the full backing of its biggest, most powerful partner on the world stage.

Mr. Putin met China’s leader, Xi Jinping, on Thursday in their first in-person meeting since Russia invaded Ukraine, and as Mr. Xi traveled abroad for the first time since the start of the pandemic. But rather than put on a show of Eurasian unity against the West as Russia struggled to recover from last week’s humiliating military retreat in northeastern Ukraine, the two leaders struck discordant notes in their public remarks — and Mr. Xi made no mention of Ukraine at all.  As reported by The New York Times.

“We highly appreciate the balanced position of our Chinese friends in connection with the Ukrainian crisis,” Mr. Putin said in televised remarks at the start of the meeting. “We understand your questions and concerns in this regard.”

It was a moment, on the sidelines of a regional summit in Uzbekistan, that showed the daunting political straits Mr. Putin finds himself in nearly seven months into his invasion of Ukraine. On the battlefield, Russia has lost more than 1,000 square miles of territory this month, rendering the prospect of a decisive victory over a Western-armed Ukraine as remote as ever. At home, Mr. Putin is facing unusual criticism from some supporters over his slow military progress.

And internationally, as the West continues to ratchet up sanctions against the Kremlin, the Russian president on Thursday saw Mr. Xi — who had pledged a friendship with “no limits” just three weeks before Russia invaded — conspicuously withhold any public support for Mr. Putin’s war.

Instead, in a statement issued after their meeting, China said it was “willing to work with Russia to demonstrate the responsibility of a major country, play a leading role, and inject stability into a turbulent world.” To scholars who study the between-the-lines messaging of the Chinese government’s public remarks, it sounded like an implicit rebuke.

Sergey Radchenko, a professor at the Johns Hopkins School of Advanced International Studies, said the statement appeared to telegraph “a reproach to the Russians, that they’re not acting like a great power, that they are creating instability.” Shi Yinhong, a longtime professor of international relations at Renmin University in Beijing, said it was “the most prudent or most low-key statement in years on Xi’s part on the strategic relationship between the two countries.”

Accentuating the dissonance, even as Mr. Xi said nothing on camera about Ukraine, Mr. Putin at Thursday’s meeting backed Beijing in its confrontation over Taiwan, where tensions rose last month amid a visit by U.S. House Speaker Nancy Pelosi to lend support for Taiwan’s resistance to pressure from Beijing, which claims the self-ruled island democracy.

Still, China continues to represent a critical lifeline for Russia as Moscow looks for new export and import markets amid the crush of Western sanctions over the war. China has increased its purchases of Russian energy, while selling Russia more cars and some other goods. That support is “very important for Russia,” said Alexander Gabuev, a senior fellow at the Carnegie Endowment for International Peace, adding that he believed the Kremlin was “cleareyed” about the limits of China’s backing.

Putin is painting himself into a smaller and narrower corner!