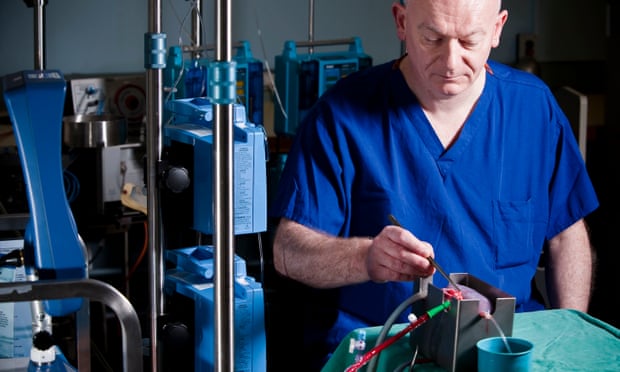 Mike Nicholson, professor of transplant surgery at the University of Cambridge, working on a perfusing kidney. Photograph: Kidney Research UK/PA

Researchers at the University of Cambridge have successfully altered the blood type of donor kidneys in a discovery that could increase the supply of the organs for transplant.  As reported by the BBC.

The breakthrough has particular implications for minority groups, who often find it harder to find a match.

But changing the blood type of a kidney to the universal type O will mean it can be transplanted into any patient.

People from black and other ethnic minority groups often have to wait a year longer for a transplant than white patients because they are more likely to have the rarer B-type blood group.

Rates of organ donation among those populations is also lower. In 2020/21, just over 9% of total organ donations came from black and other minority ethnic donors, while people from those communities make up 33% of the kidney transplant waiting list.

Scientists at Cambridge were able to use a normothermic perfusion machine – a device used to pass oxygenated blood through a kidney to help preserve it – to flush blood infused with an enzyme through a donor kidney.

The enzyme removes the blood-type markers that line the blood vessels of the organ, effectively changing its blood type to type O. The process took a matter of hours when it was successfully performed on three donor kidneys.

Serena MacMillan, a PhD student who worked on the study, said it was “very exciting to think about how this could potentially impact so many lives”.

The next step is to see how the kidneys react when given a normal supply of blood from their new blood group, something which can again be tested using a machine before the kidney is transplanted into a patient.

The research, which is funded by charity Kidney Research UK, is due to be published in the British Journal of Surgery in the coming months.

This is a fascinating and compelling idea, but it’s impact on organ transplantation is still unproven.

There are questions about the science and how much more it can increase the availability of organs for donation.

It will take further tests to see how these tweaked organs perform when actually dealing with formerly mismatched blood. And to ensure there process does not damage the kidneys in any way.

This will have to be tested in the laboratory and then in small numbers of patients.

Also blood group is only one of three ways kidneys are matched before transplant and half the population are already either O positive or O negative (whose kidneys can be donated to anybody).

Tissue matching and cross matching (in which the blood of donor and recipient are mixed to see if there’s a reaction) will still be a factor, particularly in ethnic groups.