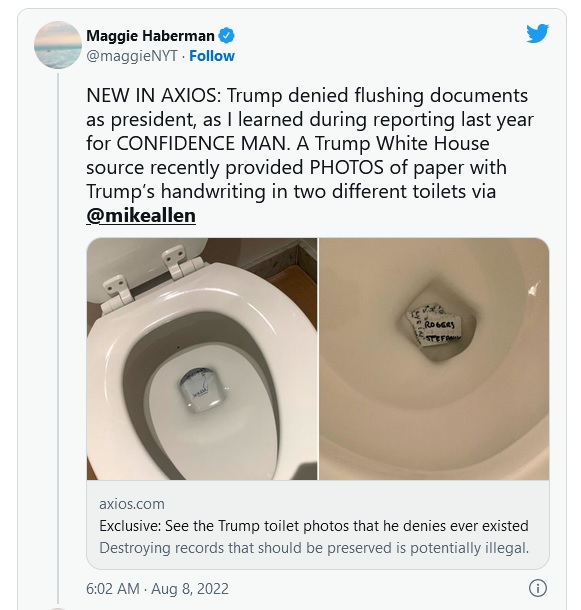 The scraps were submerged in the bowls of two different toilets — one in the White House and one used by Trump during an overseas trip, she said, retweeting an Axios article that includes the photos and comments about her upcoming book “Confidence Man.”

Haberman revealed in February that sources for her book told her that White House residence staff periodically found papers clogging toilets. The staffers believed the then-president had ripped up documents that should have been preserved and attempted to flush them away.

Trump at the time denied the allegations as “another fake story.”

After the photos made a splash yesterday, Trump spokesperson Taylor Budowich tried to slam the lid on the story. “You have to be pretty desperate to sell books if pictures of paper in a toilet bowl is part of your promotional plan,” Budowich said.

Haberman, discussing the story Monday on CNN, emphasized that “gross and important” are “the two important words here.” She added that the document dump would still be a story if Trump was accused of tossing records into a fireplace instead of a toilet.

“The point is about the destruction of records, which are supposed to be preserved under the Presidential Records Act, which is a Watergate-era creation,” Haberman said.

Below is a video of Trump ranting about toilets and sinks in 2020.