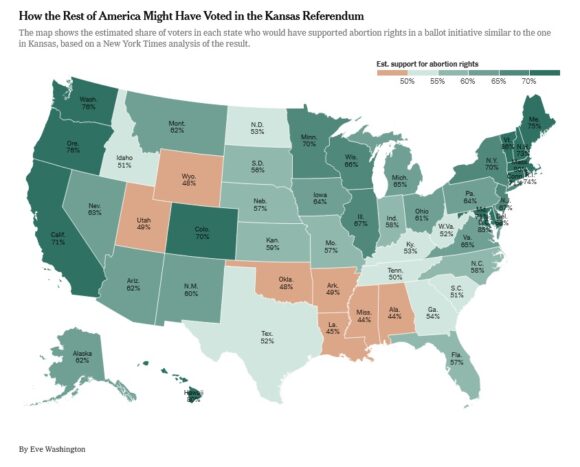 Tuesday’s resounding victory for abortion rights supporters in Kansas offered some of the most concrete evidence yet that the Supreme Court’s decision to overturn Roe v. Wade has shifted the political landscape. The victory, by a 59-41 margin in a Republican stronghold, suggests Democrats will be the energized party on an issue where Republicans have usually had an enthusiasm advantage. The New York Times has an article this morning analyzing the possible implications of the Kansas vote nationally.  Here is an excerpt.

“The Kansas vote implies that around 65 percent of voters nationwide would reject a similar initiative to roll back abortion rights, including in more than 40 of the 50 states (see map – a few states on each side are very close to 50-50). This is a rough estimate, based on how demographic characteristics predicted the results of recent abortion referendums. But it is an evidence-based way of arriving at a fairly obvious conclusion: If abortion rights wins 59 percent support in Kansas, it’s doing even better than that nationwide.

It’s a tally that’s in line with recent national surveys that showed greater support for legal abortion after the court’s decision. And the high turnout, especially among Democrats, confirms that abortion is not just some wedge issue of importance to political activists. The stakes of abortion policy have become high enough that it can drive a high midterm-like turnout on its own.

None of this proves that the issue will help Democrats in the midterm elections. And there are limits to what can be gleaned from the Kansas data. But the lopsided margin makes one thing clear: The political winds are now at the backs of abortion rights supporters.”

Interesting analysis that gives the Democrats some hope for the midterm elections in November.