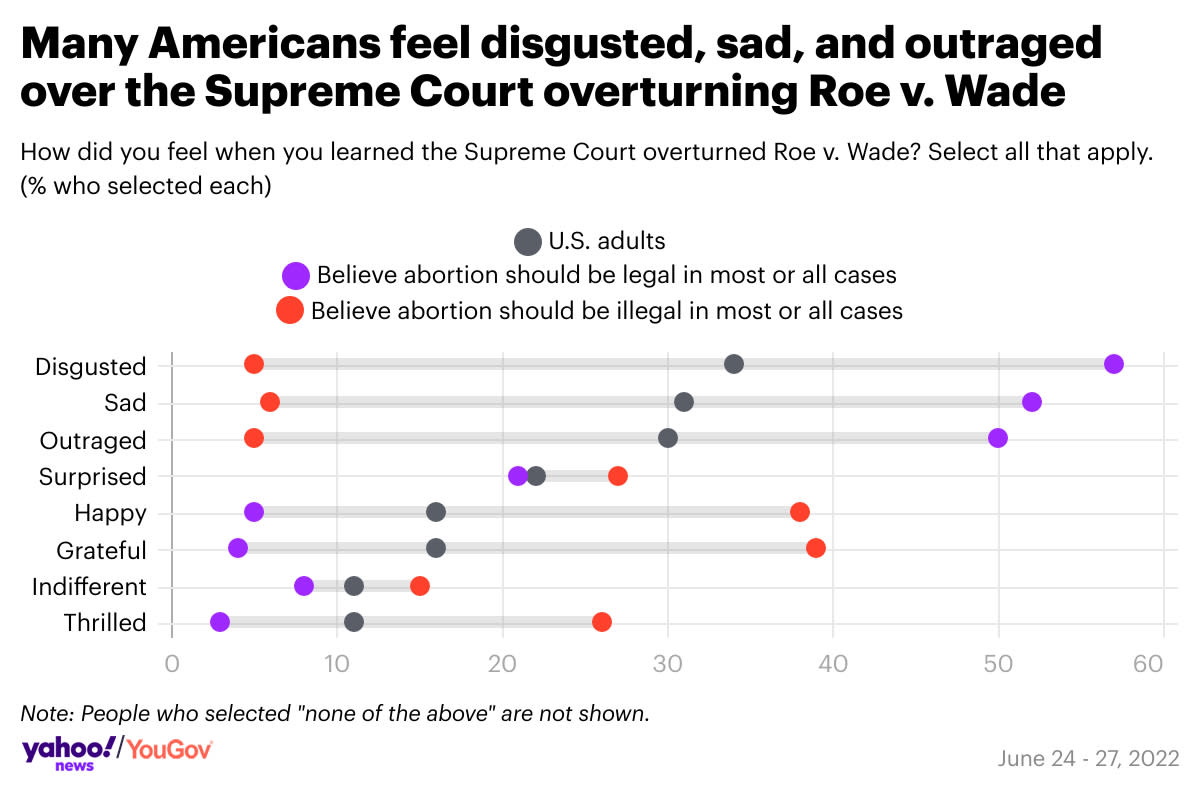 A Yahoo News/YouGov poll shows that more than six in 10 Americans (61%) now have little or no confidence in the Supreme Court after its decision Friday to overturn Roe v. Wade — a near-total reversal from the 70% of voters who expressed at least some confidence in the court right before conservative justices gained a 6-3 majority with the confirmation of Amy Coney Barrett in October 2020.

A more recent Yahoo News/YouGov poll conducted in May 2022 — immediately after Justice Samuel Alito’s draft opinion on Roe first leaked — found that the court’s standing was already slipping with conservatives in control.  As reported by Yahoo News.

Since Roe was officially reversed, however, the number of Americans who express a total lack of confidence in the court has soared by 14 percentage points (to 39%), with large increases among Democrats (+24 points) and independents (+14 points). A clear majority of Democrats (54%) now say they have zero confidence in the court, while another 22% say they have only “a little”; just a quarter have “some” (18%) or “a lot” (7%).

At the same time, half of all Americans (50%) now disapprove of the way the Supreme Court is doing its job, an 8-point jump from last month (driven by increases of 11 points among both Democrats [to 70%] and independents [to 52%]). Overall, just 37% of Americans approve.

And even fewer (33%) say they agree with the court’s actual decision to overturn Roe v. Wade — the decision at the center of its collapsing reputation.

The other two-thirds of Americans either disagree with the court’s ruling in Dobbs v. Jackson Women’s Health (49%) or say they’re not sure (18%).

Now that Roe is gone, the new survey of 1,630 U.S. adults, which was conducted from June 24 to 27, is striking in part because it reveals a counterintuitive gap in energy and emotion between Americans who favor abortion rights and those who oppose them.

For decades, so-called pro-life forces have been portrayed as the more passionate side in U.S. politics. But Dobbs may change that.

This could have political consequences in the 2022 midterms. For one thing, more Democrats now name abortion (17%) over inflation (16%) as “the most important issue to you when thinking about this year’s election,” suggesting that the issue could motivate them to turn out at the polls. Among all voters, abortion (11%) now ranks third behind inflation (34%) and democracy (20%), with crime (4%), immigration (7%), health care (5%) and climate change (5%) trailing well behind.

Likewise, Americans now say the Democratic Party (40%) would do a better job handling abortion than the Republican Party (31%), up slightly from 38%-32% a month ago.

But perhaps most importantly, the new Yahoo News/YouGov poll shows that 45% of registered voters now say they would vote for a Democrat for Congress if the election were held today, versus 38% who say they would vote for a Republican — a 7-point gap that has nearly doubled since last month. And when explicitly asked to choose between a “pro-choice” Democrat (47%) and a “pro-life” Republican (32%), that same gap actually doubles again, to 15 points.

Since Friday, national Democrats from President Biden on down have argued that “Roe is on the ballot” this fall; on Monday, Speaker Nancy Pelosi said the U.S. House would soon take up legislation to “further codify freedoms which Americans currently enjoy.” Meanwhile, former Republican Vice President Mike Pence, among others, has said conservatives “must not rest and must not relent until the sanctity of life is restored to the center of American law in every state in the land.”

Now that the Supreme Court has overturned Roe v. Wade, 52% of registered voters say they want Congress to pass “a law that keeps abortion as legal and accessible nationwide as it has been under Roe”; just 35% of voters oppose such a law. Even more voters (64%) oppose “passing a law that bans abortion nationwide” (i.e., the Pence position). Less than a quarter (23%) favor such a ban — including only half of those who say abortion itself should be illegal in most or all cases.

The Yahoo News survey was conducted by YouGov using a nationally representative sample of 1,630 U.S. adults interviewed online from June 24 to 27, 2022. This sample was weighted according to gender, age, race and education based on the American Community Survey, conducted by the U.S. Bureau of the Census, as well as 2020 presidential vote (or non-vote) and voter registration status. Respondents were selected from YouGov’s opt-in panel to be representative of all U.S. adults. The margin of error is approximately 2.9%.