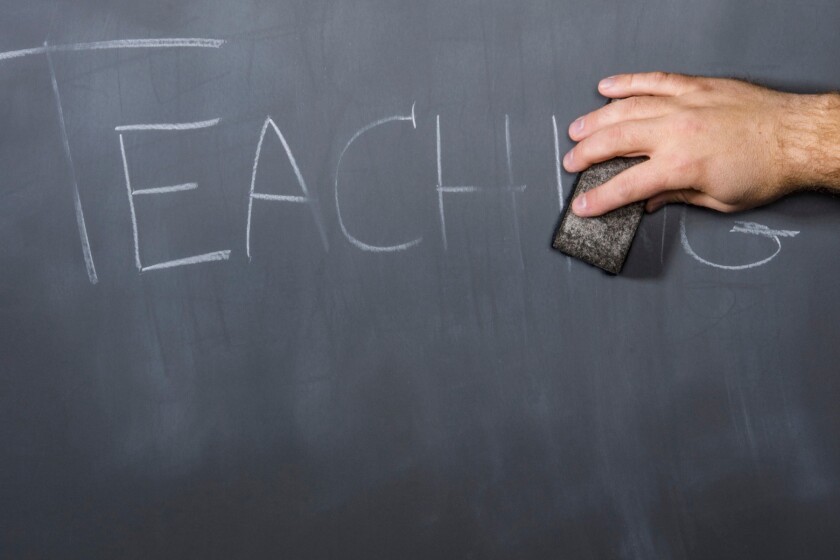 The Chronicle of Higher Education had an article yesterday commenting on how teacher education faculty are reacting to state laws limiting what K-12 teachers can say in their classrooms regarding racism and other DEI topics. Since 2021, more than a dozen states have passed laws — sometimes referred to as divisive-concept laws — or used other statewide actions such as executive orders to restrict how teachers discuss certain issues. Many draw language from an executive order signed by President Donald Trump in 2020, which has since been revoked by President Biden.

The basis for the article is that faculty members at teacher colleges have had a unique perspective as the nation’s culture wars have shifted into K-12 classrooms, where many of their students work or soon will. Worried that the laws will have a chilling effect on teaching, some recommend their students consider the environment when they decide where to teach. They urge them to think creatively about how they can serve the needs of their pupils even under the constraints of the laws. And some have actively fought against the laws, testifying in statehouses against them or working to get higher education exempted from bills, and organizing faculty senates to pass resolutions opposing the laws.

For faculty in teacher education programs, these are important issues that should be considered.

Below is the entire article.

New state laws and other actions limiting what teachers can say in the classroom about topics including race, racism, and sexuality typically apply to elementary and secondary schools. So professors, while often opposed to the laws, have largely remained unaffected. But at least one group of faculty members has felt a direct impact: those training teachers.

Since 2021, more than a dozen states have passed laws — sometimes referred to as divisive-concept laws — or used other statewide actions such as executive orders to restrict how teachers discuss certain issues. Many draw language from an executive order signed by President Donald Trump in 2020, which has since been revoked by President Biden.

Faculty members at teacher colleges have had a unique perspective as the nation’s culture wars have shifted into classrooms, where many of their students work or soon will. Worried that the laws will have a chilling effect on teaching, some recommend their students consider the environment when they decide where to teach. They urge them to think creatively about how they can serve the needs of their pupils even under the constraints of the laws. And some have actively fought against the laws, testifying in statehouses against them or working to get higher education exempted from bills, and organizing faculty senates to pass resolutions opposing the laws.

Academics who have spent their professional careers working to help mold future teachers say the laws represent not only a violation of academic freedom but the rolling back of progress toward more inclusive classrooms.

“I am woefully disappointed and frankly I’m very angry that in 2022 … we are still fighting for the rights of Black and other marginalized groups to have their history told, to have their lived experiences shared,” said Donna Ford, a distinguished professor in the college of education and human ecology at Ohio State University.

What the Laws Say

Politicians and the public alike have lumped divisive-concept laws together under the banner of critical race theory, the once-obscure academic theory that conservatives rail against, although few of the state laws explicitly name the theory. Among other things, critical race theory argues that racism is structural and built into laws and institutions.

Mississippi’s critical race theory legislation, which was signed into law in March and covers public colleges as well as K-12 schools, states that educators shall not direct or compel students to personally affirm, adopt, or adhere to tenets including that “that any sex, race, ethnicity, religion or national origin is inherently superior or inferior; or that individuals should be adversely treated on the basis of their sex, race, ethnicity, religion or national origin.”

The laws rely on “unsubstantiated claims about what teachers are doing in their work,” said Rich Milner, the chair of education in the department of teaching and learning at Vanderbilt University.

Likewise, Dana Thompson Dorsey, an associate professor of educational leadership and policy at the University of South Florida who directs its David C. Anchin Center for the Advancement of Teaching, characterized the divisive-concept laws as oppressive. “It is a way of limiting teacher voice, student voice,” Dorsey said. “It’s a way to avoid discussing history in this country so that students are not learning real history.”

Professors say that their students worry about upsetting parents or other community members simply by trying to teach, for example, American history.

“They are anxious, they’re nervous, they’re frustrated, [and] scared,” said Milner. “We talk very explicitly about what do you do, how do you address and work through this legislation that is oppressive and is really undermining their professional judgment.”

Milner advises his students to save artifacts of their pupils’ work to demonstrate that they are drawing from the standards in their teaching, for example, and to engage with families and the broader community. He said that while that adds a layer of unfair and unnecessary stress to their jobs, he wants his students to be prepared for what they may face.

Dorsey urges her students to encourage conversations about difficult topics, rather than ignore them. “I tell them to stand on truth … that they are to facilitate and not shut down discussions.”

Likewise, Ford said she remains committed to helping her students learn what they need to know.

“If there’s a wall, you go around it,” Ford said. “I’m going to find a way to do what needs to be done to really prepare future educators.”

Some professors also talked about the responsibility they feel to prepare their students — many of whom are white — to be effective teachers for students of color. Meir Muller, an assistant professor in early childhood education at the University of South Carolina’s College of Education, said many Black children enter college without ever having had a Black teacher, or without seeing themselves in textbooks, or on the posters on the walls at school.

“It is this idea of letting everyone be seen in this classroom,” Muller said. “It would go for Jewish or Muslim or LGBT students. We want to make sure every student is well seen in the classroom, validated and celebrated.”

A March tweet by Amy Rutenberg, an associate professor and coordinator of the social-studies education program at Iowa State University, drew 37,500 likes. She tweeted: “For the first time in my career, I had to tell a student to change the wording of a 100% factually correct lesson plan because to teach it with the initial wording would violate Iowa’s ‘divisive concepts’ law, and now I want to cry.”

Rutenberg explained that in a lesson plan on the civil-rights movement, she suggested that her student change the words “systemic nationwide level” to “structural level,” a revision that would, in her view, meet the letter of the law without substantively changing the content of the lesson.

Rutenberg said her students are most worried about how parents will work with or against them. She noted that their concerns have escalated in recent years, with news about contentious school-board meetings, for example, making headlines.

“When I was a teacher in high schools, I gave no thought to the school board in my districts,” Rutenberg said. “That was not a thing I was thinking about; it is a thing they’re thinking about now.”

One future teacher contacted for this article declined to be interviewed, saying she did not want to risk jeopardizing her first teaching contract, given the laws in her home state of Georgia.

Others were more forthcoming. Markuan Tigney Jr., a master’s student at Vanderbilt’s Peabody College who plans to teach first grade in Virginia, where Gov. Glenn Youngkin opened a tip line in January for parents to report schools for teaching divisive concepts. Tigney said he and his classmates talk frequently about the divisive-concept laws and try to figure out what they can teach and what they can’t.

“There’s always this level of hesitation about teaching and getting in trouble,” Tigney said. “There’s always conversations like, ‘Do you think it would be OK to read this book?’”

Tigney said he has been training to become a teacher for the past four years and that he would rather focus his energy on teaching than on worrying about whether he might say something that would offend someone. “It’s like I’m being censored as a teacher when I’m the one who’s supposed to expose my children to the truth and [help] them become critical thinkers themselves,” Tigney said.

Chris Darby, who is pursuing a Ph.D. at the University of South Florida and hopes to enter academe someday, said the debates may well affect where professors decide to live and teach. “A lot of times universities miss out on great professors who opt out because the politics hinder their work,” Darby said.

Even as a student, Darby said, he has sometimes stopped himself from asking a question or making a point in a public setting because he’s worried that his views might change how a professor grades him. “I think it limits knowledge because there’s not healthy way to disagree.”

Caroline T. Clark, a professor in Ohio State’s department of teaching and learning, feels heartened by her students’ resolve to teach in spite of the divisive-concept laws. Students have told her that if they can reach the one child who really needs to hear something, for example, that would make it worthwhile to have become a teacher.

“It sounds hyperbolic, but it’s kind of a brave thing to say as a young teacher,” Clark said. “I’m impressed and hopeful because I feel increasingly their commitments are strong.”