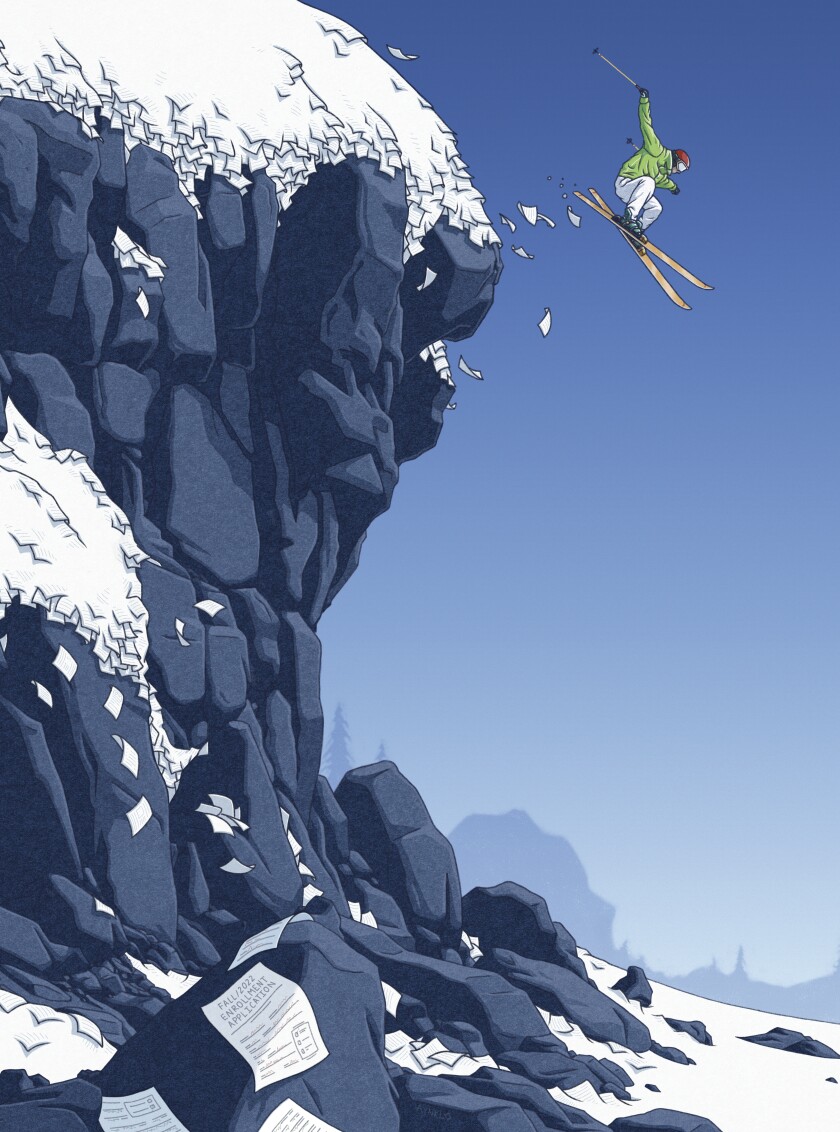 Jon Boeckenstedt, vice provost for enrollment management at Oregon State University, has an article in The  Chronicle of Higher Education entitled, “Will Your College Survive the Demographic Cliff.”  He provides a data-packed analysis of future enrollment trends in higher education based on demographics especially predicted high school graduation rates. It is not a pretty picture.  However, his conclusion is that while national trends are dismal, college enrollments will be largely affected by local demographics as well as whether states tend to attract or lose students. He also provides an interesting analysis of student race and family income levels as important determinants of college enrollment.

One of his conclusions is:

“As many people have noted, it’s not just the numbers that are changing; it’s the mix of students. That means we’re not looking so much at a demographic cliff as we are at a demographic perfect storm.”

Below is an excerpt from the article.  It should be read by college administrators around the country.  Also be sure to follow the links in the article.  They provide critical data from reliable sources.

“On campuses across the country, and also in the media, the enrollment consequences of the sharp drop in birth rates starting in 2007 are being debated. Many have relied on the excellent work of Nathan Grawe, an economics professor at Carleton College who is very bearish on the future of the market. His book Demographics and the Demand for Higher Education is widely cited as the gold standard when looking 10 years into the future. Some, using Grawe’s analysis, see severe enrollment declines that will disrupt how colleges operate. Others think that the threat has been exaggerated and that the industry will escape mostly unharmed. It seems clear, looking at the data, that a demographic cliff is coming. But it won’t affect all colleges in the same way.

If it’s true that all politics is local, then in some sense so is (almost) all college enrollment.

The truth is that higher education is well placed to predict the future. We have a long view on our markets second only to the funeral industry. And sometimes demographic patterns turn out as planned. In my generation the drop in high-school graduates happened right on schedule; that spike in births in 1957, caused by World War II veterans reaching their late 30s and early 40s during the mid-1950s, signaled the beginning of the end of the baby-boom generation. The tally of 4.3 million births in 1957 wasn’t matched again until 50 years later, in 2007.

But the drop in high-school graduates (down 21 percent from 1975 to 1992) did not coincide with a drop in college enrollment. In fact, just the opposite happened. At first, undergraduate enrollment continued to increase, until about 1985, when it fell slightly. But starting in 1986, things quickly picked up, and enrollment increased from 10.3 million in 1986 to 17.3 million 2011, a remarkable 68 percent, even though the population of high-school graduates over that time increased only 31 percent.

What happened? High-school graduation rates increased. America, still interested in investing in education, increased financial aid, knocking down the largest barrier to a college degree. Programs focused on the special needs of those age 25 and older popped up all over the country. Colleges opened branch campuses to make education more convenient. Universities began to recruit internationally, and those efforts paid off: The number of international students doubled from 1985 to 2010, and grew by 730,000 more students by 2019. For-profit higher education expanded, and began enrolling many students who were not well served by traditional colleges. Concerns about the budget ramifications of drops in enrollment at the undergraduate level were softened by an astonishing increase of 95 percent in graduate-education enrollment from 1986 to 2020.

Fast forward. History repeats itself, and now we’re looking at another demographic cliff.

The raw numbers aren’t perfect, but they are a good place to start. The basis of most of our foresight comes from federal data and from data produced by the Western Interstate Commission for Higher Education. Both data sets generally show the same thing: The number of public high-school graduates is expected to peak in about 2025 or 2026, and then fall off. The commission says 3.5 million in 2025; federal data say 3.4 million in 2026. Then, both data sets agree, we’ll see a steady decline as far out as the projections go. The federal data say 3.2 million in 2030, and the commission says 3.3 million in that year but, for good measure, projects all the way to 2036, when the numbers drop to 3.2 million. The last time we saw numbers like that was — get ready — 2015.

The numbers are less troubling than some suggest. But the national numbers don’t tell us very much. If it’s true that all politics is local, then in some sense so is (almost) all college enrollment.

Before you think about anything else, consider this: A majority — 56.2 percent — of students at public four-year colleges attend an institution less than an hour’s drive away from home, and nearly 70 percent attend within two hours. So if your college is in Connecticut, a booming population in Florida or Arizona might be interesting, but it probably won’t solve your future enrollment challenges. If you want to see how reliant your college is on regional migration and how it’s changed over time, take a look at the Ipeds freshman–migration data I visualized here using the last tab on the display.

National numbers of high-school graduates are really not that important to most colleges. It’s better to look at the number of graduates in your state or region. When you do, you’ll see that New England and the Great Lakes states have been dealing with falling numbers for a while; in other regions, the decrease will come later and be more temperate. Where you sit is where you stand, both literally and figuratively.

But that’s not all. As many people have noted, it’s not just the numbers that are changing; it’s the mix of students. That means we’re not looking so much at a demographic cliff as we are at a demographic perfect storm. This new phenomenon will be a lot different for several reasons, and not just because we’ve already exercised many of our mitigating strategies. We made lemonade from lemons a long time ago, and there is not much juice left to squeeze.

This year white public-high-school graduates will no longer be a majority in the United States, and will drop to about 42 percent of all graduates in 2036, the farthest year out we can predict. Among the many dubious reasons people may have for being concerned about the drop in white students, there is at least one legitimate one: Who goes to college in America is driven by several factors that tend to overlap strongly, and those factors affect market viability: parental attainment of a college degree, parental income, and student ethnicity.

College attendance by ethnicity lines up in the exact same order as parental attainment and parental income: Asian, white, Hispanic, and African American. And the data tell us that the 10-percent decrease in white graduates won’t be offset by small increases in Asian populations or even larger increases in Hispanic populations.

Again, this is not new information. Almost a decade ago, the Human Capital Research Corporation provided sortable data from the Census Bureau’s 2011 American Community Survey. Breaking down the numbers of children by age, ethnicity, parental attainment, and — especially — income shows what demographers have known for a long time: Wealthier families have fewer children. That data predicted many colleges’ difficulty in enrolling students who can afford to pay the full cost of attendance. Discount rates, but especially concerns about net revenue, are obvious at many private colleges; the recent decline in median family income won’t help ease that concern, and whether the trend might be driven by Covid-19 is irrelevant.

If your campus is 85-percent white, you need to ask yourself how students in the future will consider you relevant.

Finally, we can’t focus exclusively on the future and ignore the present. The public is losing confidence in higher education, a trend long in coming and slow in developing. The last time college enrollment increased in the United States was 2014-15, and it too has been on a slow, steady decline since then, even before the pandemic. Of course, 2020 threw us a sucker punch, when enrollment dropped by almost 700,000 students (4 percent) in one year, and estimates suggest 2021 saw an additional 3-percent decline. It’s true, of course, that almost all of that drop is explained by decreases in community-college enrollment. But that may be the bellwether that signals bigger problems ahead.

It’s possible that the change we fear is already here. It’s also possible — but considerably less probable — that this fall will mark the beginning of the rebound, and in 10 years we’ll be wondering what we were worrying about. There are far too many critical points between now and then to know for sure, but it’s clear that the most prudent approach is to plan for the worst and hope for the best. Check that. Plan for the worst, and do everything you can to foster the best for your campus.

If you’re in Vermont, you will naturally think about this differently than if you’re in Florida or Arizona. If your campus is 85-percent white, you need to ask yourself how students in the future will consider you relevant. If your curriculum hasn’t changed in 40 years, it may be time to modernize it. If you’ve relied on international students — especially from China — to contribute substantially to the bottom line, it might be wise to consider other options.

And if you haven’t thought about this at all, well, there is no time like the present.

We are at a critical moment: Declining enrollment even in one sector (say, community colleges) is troublesome because of downstream effects. Declining revenue and wavering state support, coupled with fewer high-school graduates, fewer families that don’t need financial help, and an increasingly negative attitude from the public toward higher education, may take us to a long-rumored tipping point. While there are no guarantees, the colleges that are aware of how those trends will affect their specific states and regions, are dealing with those issues, and are looking realistically toward the future are likely to be the ones best able to survive.