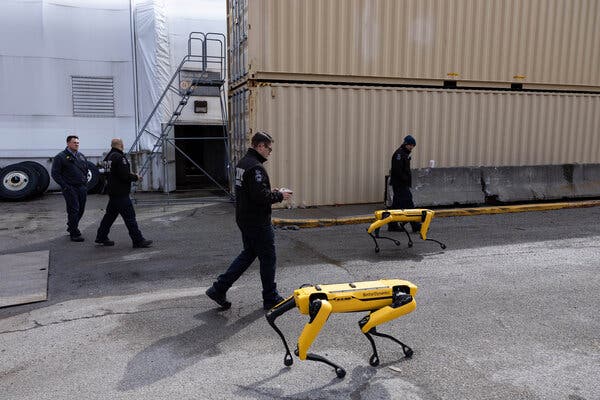 The FDNY robotics team practicing with the Spot robots.

The FDNY is the first fire agency in the country to purchase the 70-pound machines, which cost $75,000 each and are built and sold by Boston Dynamics. As reported by The New York Times.

The New York City Police Department cut short its contract with Boston Dynamics last April after critics raised concerns about privacy, data collection, aggressive police tactics and the generally dystopian vibes the robot gave off as it trotted through a public housing development during a hostage situation.

Fire officials and robotics experts say the way the FDNY plans to use the robots might help reshape the perception of their use for public safety purposes.

At the command of a human operator, the device can provide vital information in the midst of a calamitous event. It has the ability to descend deep underground after a steam leak to collect images and data about dangerous debris. It can also be deployed moments after a building collapse to gauge structural integrity or measure the concentration of toxic, flammable gasses like carbon monoxide to better inform firefighters responding to the scene.

The real-life scenarios in which the robots, known as Spot, will be used are far different from Hollywood depictions in which humanoid or animalistic machines often inflict damage and invoke fear, said Capt. Michael Leo from the Fire Department’s robotics unit.

“The TV industry and the movie industry are hurting us in some ways because they often show pictures of robots that are weaponized, and then people think that’s how all robots are,” Captain Leo said.

“Our whole mission is a lifesaving one,” he added. “That’s the core thing. These robots will save lives.”

In the Bronx, where 17 people were killed in an apartment fire earlier this year, using the robots to enter hazardous conditions could possibly have saved the lives of firefighters and others, Borough President Vanessa L. Gibson said.

“I look forward to a positive and productive conversation with FDNY leaders to ensure these robotic ‘dogs’ are only being used on rare, specialized, occasions with a goal of protecting our residents and first responders,” Ms. Gibson said in a statement.

A Fire Department spokesman said the robots would only collect data on hazardous materials situations and added that department compliance officers had been trained on confidentiality rules. But Albert Fox Cahn, a lawyer who is the executive director of the Surveillance Technology Oversight Project, expressed concerns about what data the Fire Department robots might collect, and how that data could be used in the future.

“When agencies buy these new systems, they always point to the best case scenario for use,” Mr. Cahn said. “And I agree, if it actually is used in ways that keeps firefighters safe, that would be great. But the history has always been that even if it’s first brought in for a compelling case, you get this creep where it’s used for more and more scenarios until it’s reaching areas where it just doesn’t feel justifiable.”

The Fire Department’s robotics team has been practicing with the robots, which operate remotely with a device similar to a video game controller.Credit…Mostafa Bassim for The New York Times

Boston Dynamics said it first made its Spot robots commercially available for lease in 2019, and began selling them in 2020. The company predicts that it will have sold over 1,000 units by the end of this year, said Nikolas Noel, a company spokesman.

I think the Spot robots are a good idea especially given the way the FDNY plans to use them.