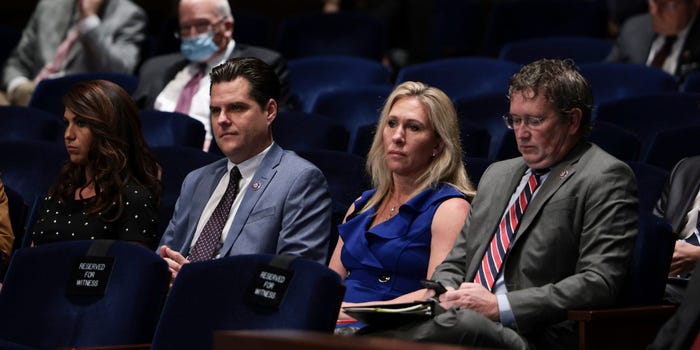 The House of Representatives passed legislation yesterday that would suspend normal trade relations with Russia, a move designed to further isolate Moscow’s economy in response to President Vladimir Putin’s war in Ukraine.

The measure passed 424-8, with all opposition coming from Republicans.

The bill would revoke Russia’s “most favored nation” status in the World Trade Organization and pave the way for President Joe Biden to introduce higher tariffs on Russian goods such as steel, aluminum and plywood. It’s the latest in a series of punitive actions in coordination with the European Union and the Group of Seven industrial nations after Russia invaded Ukraine last month.

“As Russia continues its horrific, unprovoked war on the Ukrainian people, the House is moving to inflict even greater economic pain on Russia and Belarus,” he said in a statement.

Opposition to the bipartisan bill came from GOP Reps. Andy Biggs of Arizona, Dan Bishop of North Carolina, Lauren Boebert of Colorado, Matt Gaetz of Florida, Glenn Grothman of Wisconsin, Thomas Massie of Kentucky, Marjorie Taylor Greene of Georgia and Chip Roy of Texas, all of whom are avid Trump supporters.

Ukrainian President Volodymyr Zelenskyy called on lawmakers to do more to help thwart Putin’s invasion Wednesday in a virtual address to Congress.

The Biden administration has imposed a series of punitive measures to block imports of Russian oil and gas, among other goods, in coordination with the E.U. But Zelenskyy has said he needs allies to take military steps to protect Ukraine, such as imposing a no-fly zone over parts of the country and providing fighter jets.

The trade suspension bill now heads to the Senate. Biden is expected to sign it when it reaches his desk.

“Both parties — Democrat and Republican — remain united in sending Putin a clear message: His inhumane violence against the Ukrainian people will come at a steep price,” he said from the Senate floor. “I will work with my colleagues to move it through this chamber quickly.”

It is incredible that eight Republicans voted “No” on this bill especially after President Zelenskyy’s impassioned address to Congress earlier this week.