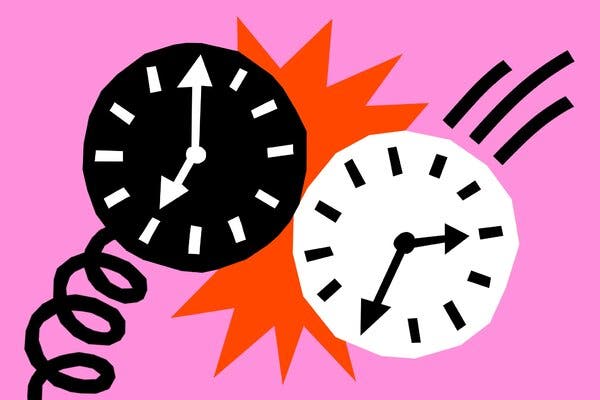 This was the weekend that we changed out clocks to daylight savings time and as usual we hear debates about why we do we have to make this change.  The New York Times has an article that asks experts about the benefits of changing or not changing our clocks twice a year.  Below is an excerpt.

On Sunday, most people in the United States will “spring” their clocks forward by one hour, heralding the end of standard time (with its brighter mornings and darker evenings) and the beginning of daylight saving time.

But according to polls, most Americans don’t like changing the clocks twice a year, and the days after the switch are often a turbulent time for public health.

As a result, a growing cadre of scientists, politicians and business leaders have been urging the country to stop changing the clocks altogether, and to pick one permanent time system.

The only problem: Nobody can agree on which one to use.

The claim that darker mornings and brighter evenings would be a boon for public health has not been well studied, in part because it’s near impossible to conduct national experiments on the topic. And in fact, many related studies are limited and sometimes contradictory.

Nevertheless, a loud group of business leaders, academics and bipartisan senators have suggested that a permanent switch to daylight saving time would be beneficial for most people in the United States.

Senator Marco Rubio, a Republican from Florida, introduced legislation in 2018 arguing that Americans shouldn’t have to suffer the sleep loss or hassle that comes with changing the clocks twice a year. Brighter afternoons, he (and other senators) have said, will make people more productive, well rested and happier.

Some limited yet related research seems to support that claim. In one 2017 study from Denmark, scientists analyzed a psychiatric database of more than 185,000 people from 1995 to 2012. They found that the fall transition to standard time was associated with an 11 percent increase in depressive episodes, an effect that took 10 weeks to dissipate. The spring switch, by contrast, had no similar effect.

There are economic interests as well. Some lobbyists in the retail and leisure industries have argued that more light in the evenings would give consumers more time to spend money — through shopping or golfing, for instance.

Some advocates also say that permanent daylight saving time might translate to fewer robberies. And they suggest savings in energy as well, since people won’t have to turn their lights on until later in the evening (though most research disputes that claim, or finds only a minor effect).

“Darkness kills; sunshine saves,” said Steve Calandrillo, a law professor at the University of Washington who has conducted economic research into daylight saving time. He said that the evening rush hour is already dangerous: The roads are crowded, drivers are tired after work and they are more likely to have alcohol in their systems.

But dark roads are only one factor in car safety.

Several coalitions of scientists, including the American Academy of Sleep Medicine, on the other hand, argue that standard time (with its brighter mornings) is more naturally aligned with the progression of the sun, and therefore with the body’s natural clock. However the studies in favor of this argument similarly do not prove cause and effect.

Scientists say that a permanent switch to daylight saving time might throw people’s circadian rhythms out of whack, leading to unintended health consequences.

One 2019 study, which looked at how light affects people at opposite ends of a single time zone, found that an extra hour of natural light in the evening led to an average of 19 fewer minutes of sleep. Chronic sleep deprivation has been linked to a range of health conditions, like obesity, heart disease and diabetes.

This “mismatch” between your internal clock and environmental cues, said Dr. Anita Shelgikar, an associate professor of neurology and director of the sleep medicine fellowship program at the University of Michigan, can disrupt your circadian rhythm.

Light cues from the sun also regulate metabolism, insulin production, blood pressure and hormones. And your circadian clock helps to control your immune system, so being out of whack during daylight saving time can wear down your body’s natural defenses.

“The idea is that you’re off-kilter,” said Dr. Beth Malow, a professor of neurology and pediatrics and the director of the sleep division at Vanderbilt Medical Center.

While no study has proved that standard time is best for human health, most experts agree that circadian misalignment can carry higher risks of some serious health conditions, including obesity, metabolic disorders, cardiovascular issues, depression and even cancer. A loud chorus of sleep researchers even suggest that resetting the clocks by just one hour during daylight saving time could trigger those same outcomes.

I would not hold my breadth for any changes soon!