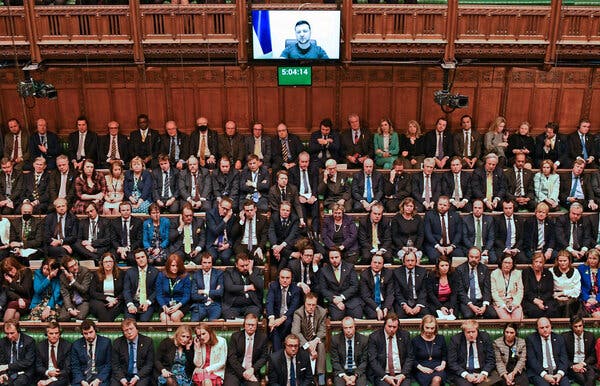 Maureen Dowd in her column this morning comments on Ukraine President Volodymyr Zelensky using lines from Shakespeare’s Hamlet, to demonstrate his resolve to fight and defeat the Russians who have invaded his land.

“The question for us now is to be or not to be,” Zelensky told the British Parliament in a video call on Tuesday, speaking in Ukrainian. “This is the Shakespearean question. For 13 days, this question could have been asked. But now I can give you a definitive answer. It’s definitely yes, to be.”  Here is an excerpt from Dowd’s column.

“As Simon Godwin, the director of the Shakespeare Theater Company in Washington, D.C.,  noted of the TV sitcom actor turned Ukrainian wartime president, “He has become, in a way, the world’s greatest actor engaged with the world’s deepest truth, using a piece of poetry to express this truth in a forceful context.”

What made the Ukrainian president’s delivery so powerful was that the world is caught up in the existential questions raised by the moody prince of Denmark.

Will Zelensky live or die when Russian forces bear down? Will Ukraine exist as a sovereign nation? What does this crisis mean for the identity of America and the West — who will we be when this is over? Will the planet even survive?

Zelensky and the Ukrainians chose to stand for something, and to be. They are united as a democracy in a way America has not been for a long time, as we have become more and more riven over politics, with burning questions of reality and artifice; with the destructive partisanship of masks and Covid; and with the corrosive effect of our culture of greed, selfishness and billionaires.

Ukraine is showing a collective will, an inspiring community of people working together. Their heroic efforts against a gobbling tyrant set on empire recall America’s own beginning. They have also shown military experts that in a conventional war, the U.S. would smoke Russia. Its military has been shockingly slow and stumbling, even as it has inflamed people around the world by killing children and fleeing civilians.

President Biden and his generals are facing their own existential moment as they try to figure out the incredibly knotty problem of where the line is. Are Javelins OK and MiGs too far? How do we do everything we can to help Ukraine without spurring a sadistic and unhinged Vladimir Putin to start World War III and a nuclear conflagration?

Despite the threat, we must stand by Ukraine in what its ambassador to the United States, Oksana Markarova, calls “the 1939 moment” of good versus evil.

As Illia Ponomarenko, a reporter for The Kyiv Independent, tweeted Friday (vulgarity excised): “I wonder how many Ukrainian cities Russia needs to carpet-bomb until the West realizes that every time it refuses to give Ukraine a weapon for ‘fear of provoking Putin’ is an invitation for further escalation in war.”

I talked to George Pataki, the former governor of New York, who is in Ukraine, near Hungary, helping refugees.

“When we ask Ukrainians what they most want, the answer we always get is, ‘Close the sky,’ because families, homes and towns are being devastated from above by the Russian military,” he said. “And it’s very disappointing not to be able to answer that question. I understand we’re not going to create a no-fly zone, but we should give the Ukrainians the material support to enable them to create their own no-fly zone.”

Echoing our military leaders, Michael McFaul, former ambassador to Russia, told Stephen Colbert on Thursday night that a “no-fly zone is a euphemism for a declaration of war. That means an American pilot shoots down a Russian pilot, and that’s a declaration of war.” Give Ukraine everything short of that in terms of military weapons and sanctions, he said.

The attenuated debacles in Iraq and Afghanistan have left many Americans weary of conflict. But this is no time for us to withdraw into ourselves.

It is a horrible position Biden is in, dealing with an irrational, soulless fiend with over 4,000 nukes who thinks he can glue the Soviet empire back together with the blood of innocents.

As Hamlet said, the oppressor’s wrong.”

May God be with Zelensky and the Ukrainian people!