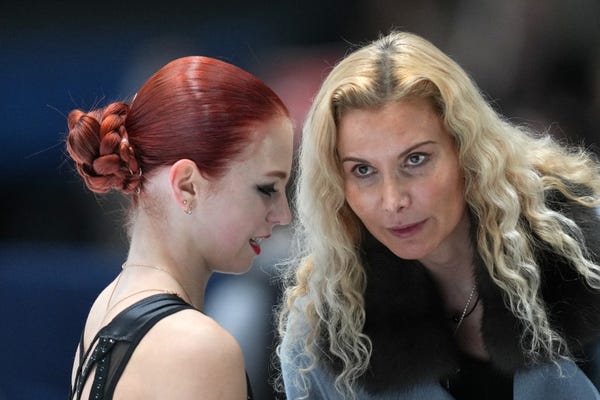 Eteri Tutberidze with Alexandra Trusova after the skater had an emotional meltdown for not winning the gold medal on Thursday.

If all eyes weren’t on Eteri Tutberidze in the aftermath of the Kamila Valieva’s disastrous free skate program, they are now.

International Olympic Committee president Thomas Bach called out Valieva’s “entourage” at a news conference Friday, saying “I was very, very disturbed yesterday when I watched the competition on TV.”

Bach did not name a specific individual, but said it was “chilling” to see how she was received by her camp.

On Thursday, Tutberidze was seen on the broadcast admonishing Valieva as she sat in the kiss-and-cry after her long program.

Valieva ended the short program in first place – not without judging questions – but her free skate, punctuated by two falls and overall a shaky showing, placed her fourth.

Earlier in the Games, Tutberidze defended Valieva after the results of a positive drug test from December were revealed. The news came the day after Valieva helped Russia secure the figure skating team gold.

“I want to say that we are absolutely sure that Kamila is innocent and pure,” Tutberidze told Channel One Russia, according to TASS, a Russian news agency. “And for us this is not a theorem, but an axiom. It does not need to be proven.”

Tutberidze rarely gives interviews to media outside of Russian-controlled news agencies. Here is what we know about the controversial coach as reported by USA Today.

Tutberidze’s path to becoming a coach is a standard one. A back injury prematurely ended her figure skating career and she transitioned to performing. She wound up in the United States as part of a Russian contingent doing ice ballet shows, according to Russia Beyond.

Fast forward 25 years, and Tutberidze has now coached the last three Olympic champions. After success on the junior circuit, she received international fame at the 2014 Sochi Olympics, where she coached then-15-year-old Julia Lipnitskaia, “the girl in the red coat.”

Four years later, she brought two contenders to Pyeongchang – then-18-year-old and favorite Evgenia Medvedeva, who took silver behind teammate Alina Zagitova, who was 15.

In 2020, Tutberidze won the inaugural International Skating Union “Coach of the Year” award.

“She’s given so much strength and dedication to her athletes this season, and now it’s time for this talented coach to take centre (sic) stage,” the organization wrote on Twitter.

Financially struggling as a performer, Tutberidze and her troop temporarily lived at a YMCA in Oklahoma City. Tutberidze was getting ready to start her day on April 19, 1995, when anti-government terrorist Timothy McVeigh set off bombs at the federal building across the street, killing 168. At the time, it was the most significant terrorist attack on American soil.

Tutberidze, whose name is on the survivors’ wall, received $1,200 as compensation for being considered a victim of the attack. She used the money to purchase a “beat-up” car and drove around the country for four years, eventually settling in San Antonio, Texas, where she began coaching.

In the U.S., Tutberidze gave birth to her daughter, Diana Davis, who is competing as a member of the Russian ice dance team and refused to answer questions about her mother after her event.

Tutberidze coaches Olympians out of what has become a notable rink in Moscow called Sambo-70. The last seven Russian national champions have trained out of the facility. None of them have had long careers.

The figure skating community considers Tutberidze’s athletes to be “one-and-done” Olympians. Zagitova stepped away in December 2019 at age 17. Medvedeva’s second-place finish in 2018 likely had to do with the cracked bone in her foot. Lipnitskaya retired when she was 19.

Tutberidze also works with controversial sports doctor Filipp Shvetsky, who was barred from the Russian rowing team in 2007 after a doping investigation. Shvetsky was alongside Valieva at her first senior international competition last October.

Russia Beyond reported that Tutberidze galvanizes success from her skaters by pitting them against each other.

On Thursday, Trusova, the silver medalist, became emotional upon learning that her teammate Shcherbakova won gold.

“Everyone has a medal, everyone has, but I don’t!” Trusova said in Russian during the broadcast, according to a USA TODAY translation. Asked if she’ll ever skate again, Trusova replied in Russian, “we’ll see.”

Valieva never should have been allowed to skate after testing positive for a doping drug.  Eteri also should have understood the emotional drain on Valieva and should have prevented her from competing.

In my opinion, Eteri Tutberidze should be banned from coaching in figure skating and the Olympics.