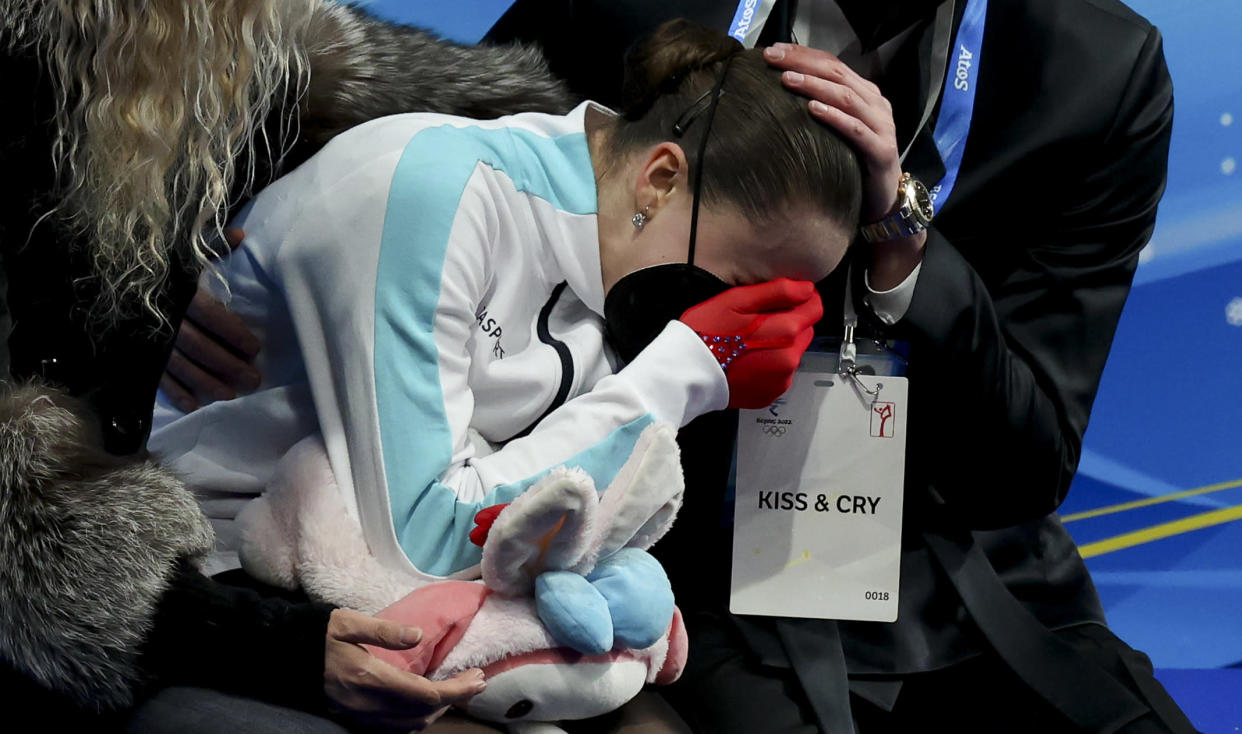 Bach says it was “chilling” to see on television. Valieva, who has been at the center of a controversy over a positive doping test, finished fourth overall despite placing first in the women’s short program earlier in the week.

The IOC president did not name Valieva’s coach, Eteri Tutberidze, who was seen on camera telling a visibly upset Valieva “Why did you let it go? Why did you stop fighting?”

Bach says “you could feel this chilling atmosphere, this distance.”

Tutberidze and other members of Valieva’s entourage will be investigated over the teenager’s positive test for a heart medication ahead of the Olympics.

Bach says the pressure on Valieva was “beyond my imagination.”

Dan Wetzel of Yahoo sports also had a blistering take on the evening commenting that Valieva was failed by the Russian system.  He commented that “Valieva was heaving. Not simply crying. Heaving. This was pain, full-on, full-emotion, pain. This was humiliation. This was devastation. This was everything.”

She came to Beijing at 15 years old to win the hearts of skating fans around the world and win a gold medal in women’s individual figure skating. She wound up the villain of the Olympics, the poster girl for doping, cheating and Russian moral bankruptcy.

And then, finally, she was a floundering failure on ice.

The girl who never lost, who never fell, who never did anything but soar higher and spin straighter than any skater ever, came in fourth. Her teammates, Anna Shcherbakova and Alexandra Trusova, took gold and silver, respectively. Japan’s Kaori Sakamoto won bronze.

Now the bill was coming due, an open wound on international television. Anguish pouring out through gasps and screams and tears that rolled down her cheeks to the side of an Olympic rink.

Her coach appeared cold and distant. Her teammates behind her were of little help. Trusova was having her own meltdown for not winning gold. “I hate this sport,” she shouted at the side of the rink. “I won’t go onto the ice again.”  Shcherbakova, who had just won first place, sat alone on a couch holding a stuffed animal. No one seemed to care about her either.

The Russians, who pride themselves on steely nerves and emotionless reactions, were in chaos.

This, this whole thing, this entire figure skating competition was a disaster, a disgrace, a dishonor to a once-great competition. It was a disservice to everyone involved, especially these teens trained and taught to perform.

“Irreparable harm,” is what the Court of Arbitration for Sport used as justification for bending logic and the rules to allow Valieva to skate despite a positive drug test hanging over her head.

Well, here was the irreparable harm.

To the sport. To the Olympics.

To Valieva, you’d imagine, this kid who, no matter the laughable defense of Russian lawyers, didn’t get hopped up on heart pills by accident via her grandpa’s stash. And she sure didn’t, all by her sheltered self, acquire, concoct and then ingest a sophisticated cardiac cocktail of three separate medications — one of them banned by the World Anti Doping Agency.

Russian coaches. Russian doctors. Russian officials. That’s who put this kind of stuff together. That’s who administers it, not some naive teen who’s lived nearly her entire life inside the cocoon of the Figure Skating Federation of Russia, built, by all means necessary, to be a champion.

Yet now she was not a champion. She was a punchline. A cautionary tale. The moral of a story about morals. She was a heaping dose of global schadenfreude, her failure celebrated. Fifteen? That’s a high school sophomore, the age when the slightest of slights on social media inside a small peer group can deliver unimaginable negative reactions.

How is it on the global stage?

Now she was alone bawling. Failed by her coaches. Failed by her federation. Failed by the IOC and CAS and everyone else who was supposed to protect her, but instead propped her up for profit and tainted glory.

A press agent at the figure skating facility was trying to tell her she didn’t have to stop for the media, that she could just keep walking. “I won’t make you stop,” the woman said. Valieva nodded. It might have been the first person who generally cared about Valieva that she had met in years. The first one to offer free will.

Whether Valieva knew what was going into her system or not, is still unknown.

She may have. Maybe all the elite skaters do. But even if she did, she was under the control — physical, mental and emotional — of this Russian skating machine that’s now churned out five medals and three individual champions across three Olympics. It was either do this, or we find another. It’s the same mind control that’s allowed pedophiles and abusers to operate throughout sport for generations.

She hailed from a country that was technically banned from the Olympics because of its comprehensive state-run doping operation. These are people who didn’t just cheat the 2014 Olympics, but the 2014 Paralympics too. A country where, after the scandal broke, saw two of the main architects turn up dead.

What chance did this girl have? What choice? Same for Shcherbakova and Trusova, both of whom come from the same system, the same coaches, the same doctors, and neither of which looked happy after. They won, but for how long? Suspicions are everywhere.

The Russians don’t care and the IOC has never made them care. Cheat without punishment and you’re encouraged to just cheat more and more and more until this carnage, the truth, this ugly truth, is playing out for all to see.

This is figure skating? This is the Olympics? This is what a court had to spare from irreparable harm?

The Court of Arbitration for Sport wants to talk about “irreparable harm?” How about the irreparable harm of 15-year-old Kamila Valieva being let down by both her performance and the corrupt Russian figure skating machine on a stage for all the world to see?

The system calls Valieva a “Protected Person” — incapable of being responsible for what is going into her body. Yet rather than protect this person, this child, the decision-makers just sent her back into a cauldron of pressure and politics to serve her sporting masters.

The shame here should spread far beyond the Russians, who likely will feel none and just find another skinny kid from Samara or Saint Petersburg or who can twirl on ice. No, this should extend to the entire sport, the entire Olympics, the entire absurd anti-doping operation that not only failed to protect anyone, but set them up and sent them out for worse.

Kamila Valieva is a victim of child abuse in real time. Yet the Olympics not only kept her with her captives, they emboldened and empowered them.

The IOC is proud that it outsourced all discipline, doping or otherwise. It would rather just wash its hands and cash the checks. What is left behind is left behind, like some useless, dilapidated bobsled track in Sarajevo. It’s just the cost of the Games, the cost of doing business.

In this case it was a heaving, bawling, broken 15-year-old, a singular example of a far greater evil.

And it was all avoidable. Every last bit of it.

For shame to the Russian figure skating coaches for letting this young woman emotionally crash on a world stage.  She and others will be scarred for life!