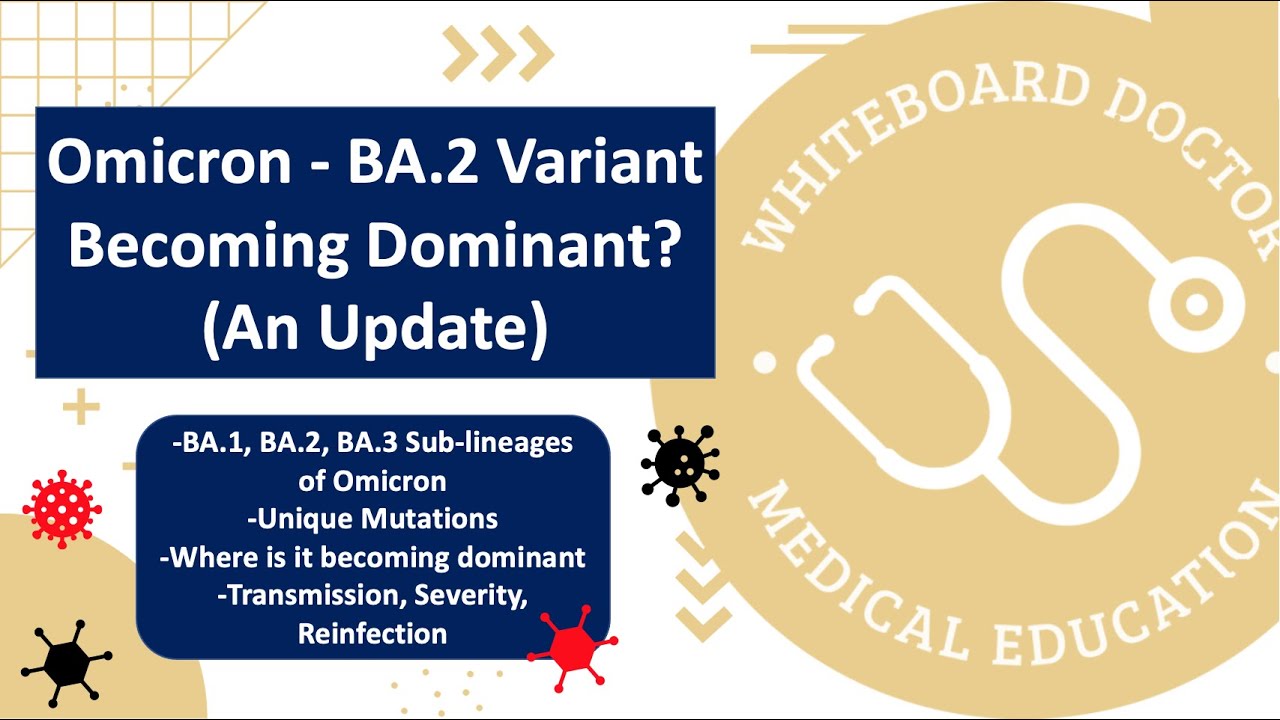 Just as we are seeing significant decreases in the number of people contracting COVID as a result of the Omicron variant, scientists have identified a subvariant – BA.2. that has begun to spread in parts of Europe and Asia

Globally, Omicron BA.1 accounted for 98.8% of sequenced cases submitted to the public virus tracking database as of 25 January. But several countries are reporting recent increases in BA.2, according to the World Health Organization (WHO).

In addition to BA.1 and BA.2, the WHO lists two other subvariants under the Omicron umbrella: BA.1.1.529 and BA.3. All are closely related genetically, but each features mutations that could alter how they behave.  As reported by The Guardian.

Trevor Bedford, a computational virologist at Fred Hutchinson Cancer Centre in the US, has been tracking the evolution of Sars-CoV-2. On Friday he wrote on Twitter that BA.2 represents roughly 82% of cases in Denmark, 9% in the UK and 8% in the US. He based his analysis on sequencing data from the GISAID database and case counts from the Our World in Data project at the University of Oxford in the UK.

The BA.1 version of Omicron has been somewhat easier to track than prior variants. That is because BA.1 is missing one of three target genes used in a common PCR test. Cases showing this pattern were assumed by default to be caused by BA.1.

BA.2, sometimes known as a “stealth” subvariant, does not have the same missing target gene. Instead, scientists are monitoring it the same way they have prior variants, including Delta, by tracking the number of virus genomes submitted to public databases such as GISAID.

As with other variants, an infection with BA.2 can be detected by coronavirus home tests kits, though they cannot indicate which variant is responsible, experts say.

Some early reports indicate that BA.2 may be even more infectious than the already extremely contagious BA.1, but there is no evidence so far that it is more likely to evade vaccine protection.

Danish health officials estimate that BA.2 may be 1.5 times more transmissible than BA.1, based on preliminary data, though it likely does not cause more severe disease.

In England, a preliminary analysis of contact tracing from 27 December through to 11 January by the UK Health Security Agency suggests that household transmission is higher among contacts of people infected with BA.2 (13.4%) compared with other Omicron cases (10.3%). The agency found no evidence of a difference in vaccine effectiveness.

A critical question was whether people who were infected in the BA.1 wave would be protected from BA.2, said Dr Egon Ozer, an infectious disease expert at Northwestern University Feinberg School of Medicine in Chicago. That had been a concern in Denmark, where some places that saw high case counts of BA.1 infections were reporting rising cases of BA.2, he said.

If prior BA.1 infection did not protect against BA.2, “this could be sort of a two-humped camel kind of wave”, Ozer said. “It’s too early to know if that will happen.”

The good news, he said, was that vaccines and boosters still “keep people out of the hospital and keep people from dying”.

Prof Seshadri Vasan, a Covid-19 vaccine researcher from Australia’s Science Agency, the CSIRO, said analysis of GISAID showed that as of 27 January, 10,811 BA.2 sequences had been reported from around the world including Australia (22 sequences), but 90% of the sequences were from three countries: Denmark (8,357), India (711) and the UK (607).

“So far, evidence from our colleagues in Denmark show that while it could spread faster, there is no evidence of increased severity,” he said. “Therefore it is important to keep calm and continue existing measures such as getting ourselves the vaccinated, including the booster dose, and following social distancing, masks and local guidelines.”

We will have to face the fact that COVID in all its forms and variants will be with us for a long time.  Vaccinations or boosters will a yearly event.