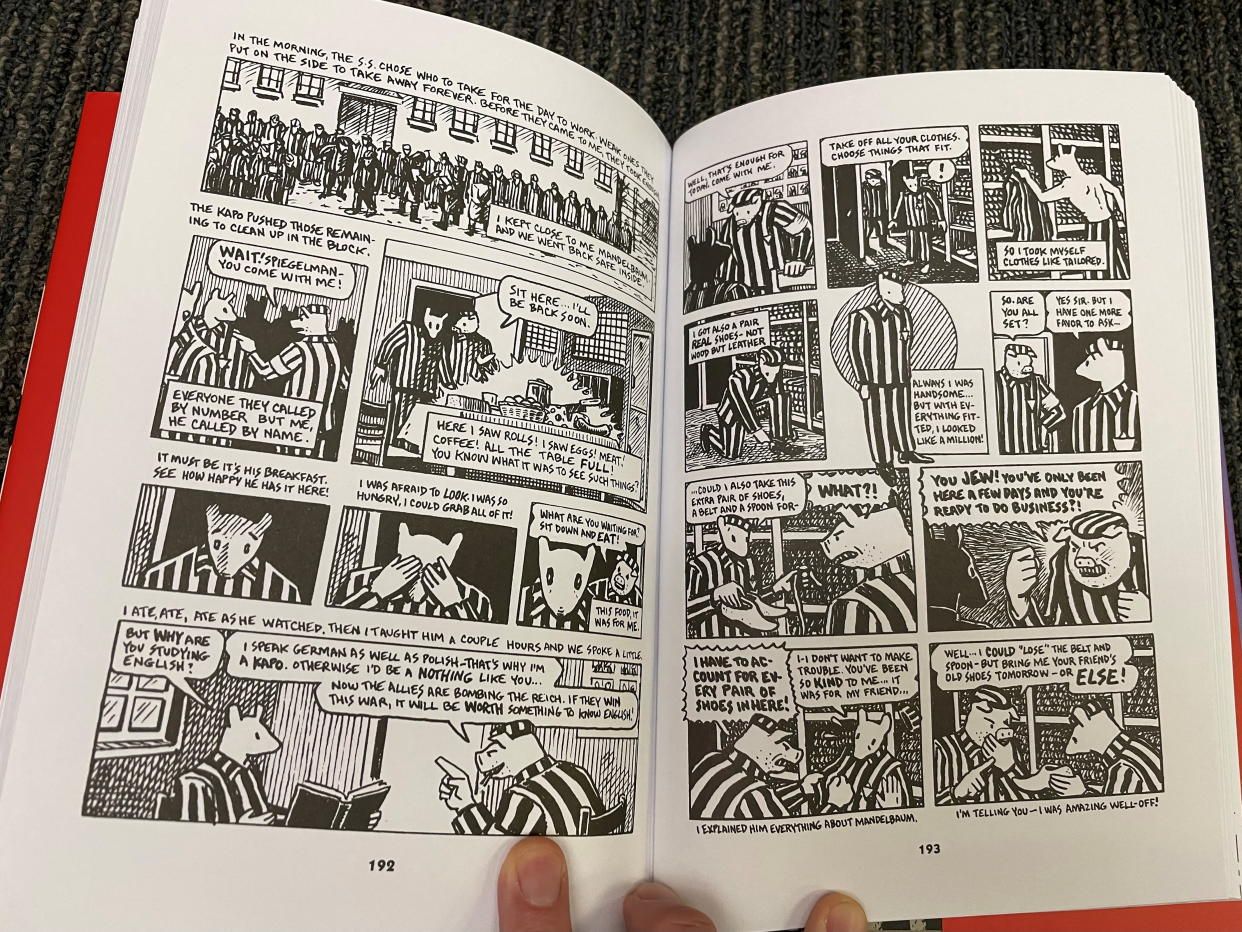 Pages from the graphic novel “Maus” by the American cartoonist Art Spiegelman are pictured in this illustration in Pasadena, Calif. (Mario Anzuoni/Reuters)

Attempts by conservative activists to regulate how schools discuss race, sexuality and gender have contributed to an ongoing effort to remove books seen as controversial from school curricula and libraries.

The most recent high-profile example was Art Spiegelman’s award-winning “Maus,” a graphic novel that depicts the horrors of the Holocaust, being removed from a Tennessee eighth-grade language arts curriculum. The McMinn County School Board voted 10-0 to remove Spiegelman’s book on Jan. 10, but the story began to circulate last Wednesday after a report from the Tennessee Holler. According to the minutes from the meeting, the use of curse words and “nakedness” were the impetus for the change.  As reported by Reuters and other media.

“I understand that on TV and maybe at home these kids hear worse, but we are talking about things that if a student went down the hallway and said this, our disciplinary policy says they can be disciplined, and rightfully so,” a board member, Tony Allman, says. “And we are teaching this and going against policy.”

The school board issued a statement  saying that the decision was not about ignoring the Holocaust but about finding options that were more “age-appropriate” in their content, concluding, “We simply do not believe this work is an appropriate text for our students to study.”

Spiegelman said he felt the board’s action was “daftly myopic” but, having read the transcript, didn’t believe the decision was rooted in anti-Semitism.

“I’ve met so many young people who … have learned things from my book,” Spiegelman told CNBC, adding that he understood that something “very, very haywire” was going on in Tennessee.

The Tennessee decision followed news of a Missouri school board voting 4-3 to ban “The Bluest Eye,” a novel by the Nobel laureate Toni Morrison, which depicts the struggles of a young Black girl dealing with racism. Due to its passages referencing incest and child rape, the book is a regular on the American Library Association’s annual lists of most challenged books.

It was almost removed from circulation in Kansas in November, along with ‘The Handmaid’s Tale” by Margaret Atwood and “Fences,” the Pulitzer-winning play by August Wilson. Both Morrison and Wilson were Black.

“By all means, go buy the book for your child,” said school board member Sandy Garber of Wentzville, Missouri. “I would not want this book in the school for anyone else to see.”

Deborah Caldwell-Stone, director of the American Library Association’s Office for Intellectual Freedom, told Yahoo News that in her two decades with the organization she has not seen this many “challenges,” the ALA’s term for requests to remove books.

According to the ALA’s raw preliminary data, Caldwell-Stone said the office typically receives about 350 challenges reported to their office per year, including 373 in 2019, the last full pre-pandemic school year. As a comparison, the group had 330 challenges reported in the three months from Sept. 1 and Dec. 1, 2021.

“You have these — they call themselves parents’ rights organizations — pursuing this censorship agenda and arguing that censorship is the proper solution, but once you start using book banning as a tool, where does it end?” Caldwell-Stone said. “So you end up with work like ‘Maus’ being on the chopping block, so what comes next?”

“We’re seeing a number of organizations encouraging local chapters and members to bring challenges, to raise them at school board meetings and library meetings, so some of this phenomenon is tied to that,” she continued. “Social media has also made it very easy to amplify a complaint about a particular book and have it go viral, and have an individual parent or even a local chapter of a parents’ rights group show up at the next board meeting and complain about that book.”

Conservative activists and donors began a coordinated effort to win seats on school boards last summer, stoking the furor over Critical Race Theory (CRT), an academic study of racism’s systemic impact. Teachers groups and schools tend to argue that CRT is not taught below the university level.

With Republican-controlled states passing laws aimed at preventing the teaching of Critical Race Theory, it is sometimes now easier for groups of parents to target specific texts. According to tracking by PEN America, 71 “gag order” bills have been introduced this month that would limit topics that can be taught in schools.

Education was a key issue in Republican candidate Glenn Youngkin’s successful campaign for governor of Virginia last year. Youngkin ran an ad in late October in which a mother stated that Democratic candidate Terry McAuliffe, who had previously served as governor, didn’t think parents should have a say in whether or not their children were exposed to “explicit material.”

The ad does not mention that the book in question is another Morrison title, “Beloved,” and that the son of the mother quoted was in an Advanced Placement English class at the time. With the issue at the forefront in the state, in the following month, two school board members in a Virginia county said they wanted books with sexually explicit language in them to be burned.

The movement to remove books from libraries and schools is organized by groups like Moms for Liberty, which has pushed to remove works about Martin Luther King, Jr., from curricula and has ties to prominent Republicans like Florida Gov. Ron DeSantis.

Another organization involved is No Left Turn in Education, which has dozens of books listed on its website that it claims “spread radical and racist ideologies to students. They demean our nation and its heroes, revise our history, and divide us as a people for the purpose of indoctrinating kids to a dangerous ideology.”

The books listed are predominantly written by nonwhite authors, and on the same page, the group includes books that discuss LGBTQ themes and feature LGBTQ characters. Titles on the list include Ibram X. Kendi’s “How to Be an Antiracist,” Angie Thomas’s “The Hate U Give” and Sarah Hoffman’s “Jacob’s New Dress.”

“Some of this has been organized around, frankly, a very cynical campaign to vilify materials dealing with racism in the United States and the experiences of Black Americans, particularly their experiences with police violence and systemic racism, under this rubric of critical race theory,” Caldwell-Stone said. “We’re also seeing organizations who believe that young people should not have access to information about gender or sexual identity.”

In at least one instance, expansive book lists have become state policy. Last month, a school district in the San Antonio, Texas, area pulled more than 400 books from its shelves to review them, “out of an abundance” of caution after a Republican state legislator published a list of 850 books he wanted reviewed. State Rep. Matt Krause, who chairs the House Committee on General Investigating and is running for state attorney general, told the Texas Education Agency in October that he was “initiating an inquiry into Texas school district content” and provided the 16-page list of books.

In the October letter, Krause cited concerns over any books that contained “material that might make students feel discomfort, guilt, anguish, or any other form of psychological distress because of their race or sex or convey that a student, by virtue of their race or sex, is inherently racist, sexist, or oppressive, whether consciously or unconsciously.”

Supporters gather for a rally, promoted by the Michigan Conservative Coalition and in opposition to President Biden, in the Brandon Township village of Ortonville, Mich., in November. (Emily Elconin/Reuters)

In December, a new Texas law went into effect intended to combat Critical Race Theory. It stipulates that a “teacher may not be compelled to discuss a widely debated and currently controversial issue of public policy or social affairs” and that if it is discussed, the educator must “explore that topic objectively and in a manner free from political bias.” One school administrator told staff members that under the new law they should be prepared to teach an “opposing” view of the Holocaust, in order not to violate the new law, a comment that led to an apology from the school district superintendent.

Caldwell-Stone said that people taking an interest in local school and library boards, including showing up for the meetings and voting in elections, can help push back on censorship, as some students and parents are already doing. She said the group has argued “very forcefully” for wider communities to have a say on targeted books, and “that the work is evaluated as a whole and not focused on one image or a few words, so when you evaluate a work’s educational suitability that you’re looking at the broader picture.”

In addition, she said there should be “mechanisms [in place] for those parents who do have concerns about the literature for whatever reason to opt their young student out of that particular reading assignment.”

We aren’t burning the books – YET!