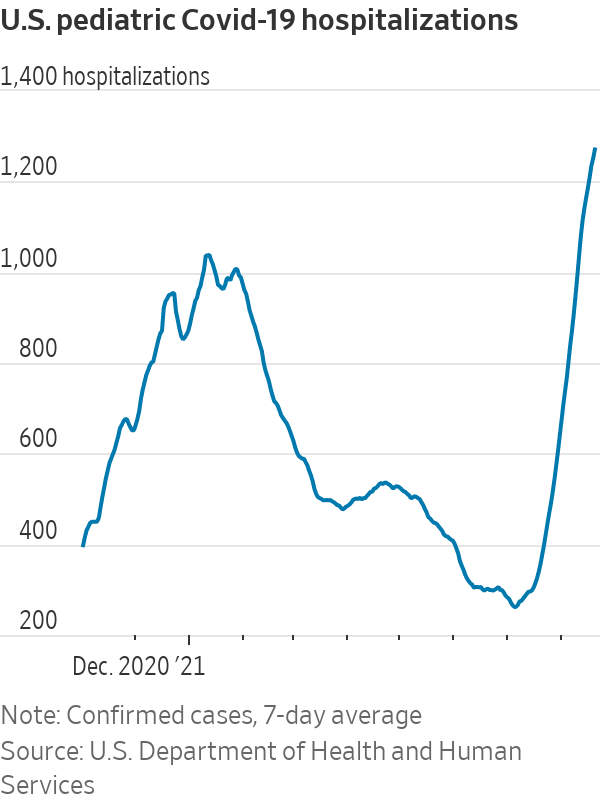 In the last four weeks, the average number of children hospitalized with Covid-19 jumped 52 percent, from a low of 1,270 on Nov. 29 to 1,933 on Sunday, according to an NBC News analysis of Department of Health and Human Services data.

The number of kids hospitalized with Covid has more than doubled in 10 states, as well as in Washington, D.C., and Puerto Rico, according to the analysis. The data does not specify whether the children were vaccinated or vaccine-eligible.

But the states that have contributed the most to the rise in pediatric hospitalizations are Florida, Illinois, New Jersey, New York and Ohio.

Dr. Paul Offit, a vaccine expert at Children’s Hospital of Philadelphia, told NBC’s “TODAY” show on Tuesday that the increase was probably inevitable because of the arrival of winter and the transmissibility of the omicron variant.

“It’s winter, and this is a winter virus, and this omicron is particularly contagious, so I think you were going to see an increase anyway,” said Offit, the director of the Vaccine Education Center at the hospital.

However, he said, his hospital has seen a lot of kids test positive for Covid without necessarily showing symptoms or getting sick.

According to the Department of Health and Human Services, patients are counted among those with Covid if they are suspected of having or laboratory-confirmed positive for the disease, even if they were not originally admitted to the hospital for that reason.

Dr. Buddy Creech, a pediatric infectious disease expert at the Vanderbilt University Medical Center in Nashville, Tennessee, said the contagiousness of omicron serves as the latest reminder that children are not immune to Covid.

“We saw similar things happen when the delta variant came along,” he said. “We had taken for granted that children were relatively under-affected by Covid, and we saw an uptick in the number of children infected and therefore admitted to the hospital with complications.”

He added that physicians are learning that the omicron variant appears to replicate far better in the nose and upper airways than previous variants, meaning parents should look out for potential symptoms such as a scratchy throat or a runny nose.

“We may end up seeing more of the classic respiratory illness,” similar to viruses such as influenza and respiratory syncytial virus, or RSV, Creech said.

In general, pediatric Covid cases are mild compared with those of adults. But kids can develop serious complications, including long Covid and an inflammatory syndrome that reaches several organs, called MIS-C. The syndrome is most common in children ages 5 to 11.

The New York State Department of Health sent a notice to physicians on Christmas Eve warning of an “upward trend” in pediatric hospitalizations.

The increase was concentrated in the New York City area, according to the notice, which drew from data compiled between Dec. 5 to the week starting Dec. 19.

The notice did not specify the number of children hospitalized, but it said New York City admissions rose “fourfold” during that time period in December.

Half of the children admitted to hospitals during that period were younger than 5, meaning they are not eligible for a Covid vaccine.

If the pediatric hospitalizations do not abate by early January, the Biden administration will have to look at the vaccination policy for younger children and schools will have to revisit their attendance plans.