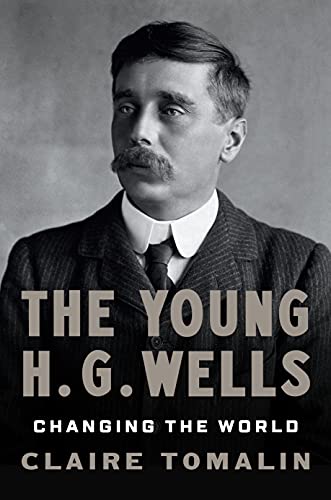 I have just finished reading The Young H.G. Wells:  Changing the World, by highly- celebrated biographer, Claire Tomalin.  A former literary editor for the New Statesman and the Sunday Times,Tomalin has won awards for books on Charles Dickens, Jane Austin, Samuel Pepys and her own autobiography, A Life of My Own.  I started reading science fiction as a teenager and Wells was one of my favorite authors and futurists.  The Time Machine and The War of the Worlds were riveting for me.  As an adult, I had faint knowledge of Wells as a leading figure in the British socialism movement and the Fabian Society.  Tomalin does a deep dive into both sides of Wells and adds fine coverage of his impoverished youth, serious illnesses, his wives and lovers, and friends such George Bernard Shaw, Winston Churchill, Henry James, Joseph Conrad, and Sidney and Beatrice Webb.  Tomalin provides a summary of his affair with Amber Reeves, twenty years younger and mother of one his children  as:

“But in life Wells and Amber Reeves separated, she to marry another man and lead a quiet, productive, and long life, bearing more children, lecturing, and writing – he to remain married to his wife, and to embark on another passionate affair in 1913 in which he fathered another illegitimate child – and to enjoy ever growing financial success as a writer, and world fame.”

I highly recommend this book if you have any interest in Wells, his life, his novels or his activism in social causes.

The Young H.G. Wells:  Changing the World
By Claire Tomalin

Toward the end of Claire Tomalin’s well-researched biography “The Young H. G. Wells: Changing the World,” she writes:

“I set out to write a book about the young Wells, covering his formation, the years in which he worked, thought and developed his skills as a writer. … He was playful, fun to be with, attractive to women and eager for sex. He had strongly held political views favoring social equality, republicanism and the establishment of world government. He saw himself as a working writer, not an artist in an ivory tower; he was rightly proud of his achievements, and expected to be well paid for his work. And he could be unreliable, selfish and even vengeful.”

This reader shares Tomalin’s fascination with her complex subject because Herbert George Wells (1866-1946), a towering genius successful in many genres, knew, influenced or was admired by virtually every major writer and thinker of his time, between the publication of his first novel, “The Time Machine,” in 1895 and the end of World War II. (Every writer of speculative fiction since then will forever be in his debt.) This list is astonishing for its diversity, including such figures as Winston Churchill, Wells’s teacher Thomas H. Huxley, Bertrand Russell, Conan Doyle, Joseph Conrad, Stephen Crane, George Bernard Shaw, Henry James, George Orwell, Aldous Huxley and architects of the Bolshevik Revolution. As Tomalin writes, “his celebrity was immense,” and as Shaw observed, Wells had in his late-Victorian world “every social circle in the kingdom open to him.”

But he was not born into wealth or privilege, though he and his mother, Sarah, a woman “deeply religious and devoted to the Church of England,” saw themselves as middle-class. We must admire the way Wells managed to overcome poverty and physical illness. “For two years,” writes Tomalin, “the family lived on meager fare — bread and cheese, half a herring for breakfast.” And Wells, as a boy, survived a broken tibia, then later after a rough game of rugby, according to a doctor’s diagnosis, “a crushed kidney and a bruised liver.” More than once, he found himself coughing up blood.

Fortunately, his mother secured employment as the maid of Frances Bullock, wife of a wealthy landowner and the owner of Uppark, “one of the most luxurious and elegantly furnished great houses in the country.” Living at Uppark with Sarah in the servants’ quarters, young Wells found a library of great literature, he could read and convalesce when ill, and during these early years wrote and illustrated his first book, “The Desert Daisy,” when he was 12 or 13 years old.

Time and again in his youth, he was confronted with career options wrong for his multiple talents, originality, imagination and critical intelligence — for example, as a chemist’s assistant, and a trial apprenticeship at Hyde’s Drapery Emporium that became “the unhappiest and most hopeless period of his entire life.” Yet some early work like being a student-teacher served him well, giving him the chance to educate himself in the fields of anatomy, mathematics, chemistry, especially biology, geometry, and then win a scholarship to the Normal School of Science. There, his talent for debate and writing, his natural charm and sense of humor, blossomed.

At the Normal School of Science, we see him “always ready to set off on fresh paths,” in Tomalin’s words. “Taking on too much was the way Wells lived his life.” He gave talks at the college Debating Society, one being “The Past and Future of the Human Race,” which foreshadowed by a decade his vision of things to come in “The Time Machine,” a work initially published in the first issue of New Review by his friend William Henley, best known for his poem “Invictus.”

Tomalin, who has written biographies of Charles Dickens, Samuel Pepys and other writers, found that she could not simply deliver the young Wells and confesses that “I have found him too interesting to leave.” Thus, all of Wells’s life emerges here as she takes us carefully through three important, overlapping profiles of one of England’s enduring, most widely read and cited literary artists. One profile is Wells as a social activist determined, as he said, “to write, talk and preach revolution.” He was an atheist, a socialist and the author of scores of books where he frequently dreamed of a better social world; his political publications were as influential and popular as his groundbreaking science fiction tales, which he called “scientific romances.” We learn about his important though not entirely comfortable involvement with the visionary progressives in the Fabian Society. In his best-selling work “Anticipations,” he told a friend, his intention was “to undermine and destroy the monarch, monogamy and respectability — and the British Empire, all under the guise of a speculation about motorcars and electrical heating.” It is no little achievement that his 1940 “The Rights of Man” became “one of the sources for the 1948 Universal Declaration of Human Rights” proclaimed by the United Nations General Assembly.

Wells did, in fact, destroy monogamy and respectability in his own life. Examining at length this unpleasant, sad dimension, Tomalin enables us to see that “he was a bad husband and an unreliable lover,” with the person he hurt the most being his second wife, Jane, who “found herself abandoned for ever longer periods as the years went by, while he carried on his love affairs in blazes of publicity.”

So it is this biography’s last profile of Wells as a prolific, original storyteller that ensorcelled me as a young reader and, as a writer, cemented my respect for him. Though he was often sick, and self-educated, his early literary labors were prodigious. Before his success with “The Time Machine,” he took work copying diagrams for slides sold to medical students, tutored students, devised quiz questions for cheap magazines and wrote two popular science textbooks, one of which he illustrated, yet to him they were hackwork. He edited a journal and weekly, churned out book reviews, tried his hand unsuccessfully at playwriting, sold lightweight pieces to The Pall Mall Gazette, which, to his surprise, earned him more money than he received from teaching. All this is but the iceberg’s tip of his voluminous literary outpourings.

“There was a period when he was turning out 7,000 words a day,” writes Tomalin. “He kept working at what seems an impossible rate, producing stories so varied one might easily think they came from a team of writers.” Few writers will equal his worldwide impact on letters. With Jules Verne and the publisher Hugo Gernsback, he invented the genre of science fiction. A crater on the moon’s far side is named after him. Nominated four times for the Nobel Prize in Literature, Wells, the futurist, foresaw the coming of aircraft, tanks, the sexual revolution, the atomic bomb, and created the classic templates for every story that has been written about alien invasion (his inspiration for “The War of the Worlds,” says Tomalin, was “Tasmania, and the disaster the arrival of the Europeans had been for its people, who were annihilated”) and time travel (he was the first to imagine such travel made possible by a machine).

Would that I could mention all the illuminating details in this biography, for example, why Wells praised Black Americans so highly, saying, “I took a mighty liking to these gentle, human, dark-skinned people,” and “Whatever America has to show in heroic living today, I doubt if she can show anything finer than the quality of the resolve, the steadfast efforts hundreds of black and colored men are making today to live blamelessly, honorably and patiently, getting by themselves what scraps of refinement, beauty and learning they may, keeping their hold on a civilization they are grudged and denied.” This book’s subtitle is exactly right, for Wells did change our world. And Tomalin’s account of his early years educates and entertains, despite the difficulty of delivering the large life and legacy of H. G. Wells in a single volume.