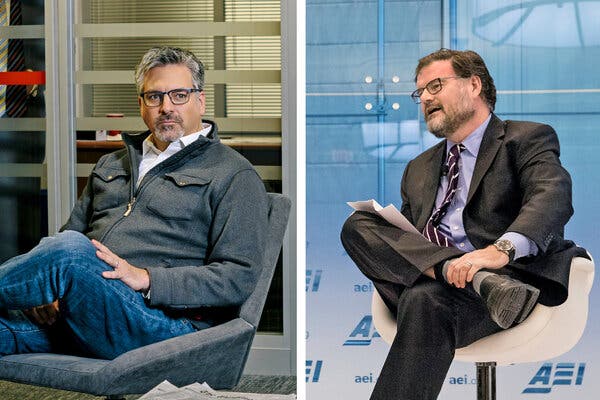 Two familiar conservative contributors, Stephen Hayes and Jonah Goldberg, resigned from Fox News in protest against its “irresponsible coverage” and promotion of “disturbing evidence of righ-wing radicalization.”  As reported by The New York Times and CNN.

The trailer for Tucker Carlson’s special about the Jan. 6 mob at the Capitol landed online on Oct. 27, and that night Jonah Goldberg sent a text to his business partner, Stephen Hayes: “I’m tempted just to quit Fox over this.”

“I’m game,” Mr. Hayes replied. “Totally outrageous. It will lead to violence. Not sure how we can stay.”

In some ways, their departures should not be surprising: It’s simply part of the new right’s mopping up operation in the corners of conservative institutions that still house pockets of resistance to Donald J. Trump’s control of the Republican Party. Mr. Goldberg, a former National Review writer, and Mr. Hayes, a former Weekly Standard writer, were stars of the pre-Trump conservative movement. They clearly staked out their positions in 2019 when they founded The Dispatch, an online publication that they described as “a place that thoughtful readers can come for conservative, fact-based news and commentary.” It now has nearly 30,000 paying subscribers.

“Every month or so, while conversing with sources at Fox News, I [Brian Stelter] express surprise that Jonah Goldberg and Stephen Hayes are still employed by the network. The two men are reality-based conservative thinkers who refused to capitulate to Donald Trump. Unfortunately, Fox viewers rarely got to hear from them. This year they were booked by the network’s producers so rarely that their contracts could be likened to golden handcuffs.

Now they are ditching the cuffs. Hayes and Goldberg announced last night that they have resigned from Fox. The pair wrote in a blog post for The Dispatch, their online home, that Tucker Carlson’s “Patriot Purge” propaganda film was the last straw.

“Fox News still does real reporting, and there are still responsible conservatives providing valuable opinion and analysis,” the men wrote. “But the voices of the responsible are being drowned out by the irresponsible,” and Carlson is the case in point. CNN and many other news outlets have described how “Patriot Purge” is disturbing evidence of right-wing radicalization, complete with January 6 denialism and paranoid descriptions of a “new war on terror” targeting Republicans. Goldberg and Hayes simply could not take it anymore.

New York Times media columnist Ben Smith, who broke the resignation news on Sunday, called up Carlson for reaction, and the trollish host naturally celebrated, saying “our viewers will be grateful” that Goldberg and Hayes are gone. But the conservative movement will suffer for it.

Rep. Liz Cheney, one of the Republican party’s foremost critics of Trump and the Big Lie, tweeted out a thank-you to the two men “for standing up for truth and calling out dangerous lies.”

Goldberg, in a phone interview with Smith, provided a rare on-the-record peek inside Fox’s political positioning. Per Smith, “Goldberg said that” he and Hayes “stayed on at Fox News as long they did because of a sense from conversations at Fox that, after Mr. Trump’s defeat, the network would try to recover some of its independence and, as he put it, ‘right the ship.'” But Fox’s decision to promote and publish “Patriot Purge” in early November was “a sign that people have made peace with this direction of things, and there is no plan, at least, that anyone made me aware of for a course correction,” Goldberg said.

In Sunday night’s post on The Dispatch, the two commentators said the “Patriot Purge” web series “creates an alternative history of January 6, contradicted not just by common sense, not just by the testimony and on-the-record statements of many participants, but by the reporting of the news division of Fox News itself.”

Hayes and Goldberg praised the “news side” (which keeps shrinking at Fox) but acknowledged that the opinion side has radicalized. “The release of ‘Patriot Purge’ wasn’t an isolated incident,” they wrote, “it was merely the most egregious example of a longstanding trend.” So they’re out. “We do not regret our decision,” they concluded, “even if we find it regrettably necessary.”

— Conservative writer Bill Kristol sent the two men kudos “for standing up to Fox, yelling Stop, at a time when few other conservatives are inclined to do so, or to have much patience with those who so urge it…”

— Liberal writer Dan Froomkin’s reaction: “We should ALL quit Fox Noise. And reality-based journalists should work to wean America off it…”

— “Steve and Jonah have been two of the bravest journalists during this whole mess,” David Brooks tweeted. “They’ve taken positions that carry real costs. Think about supporting The Dispatch.”